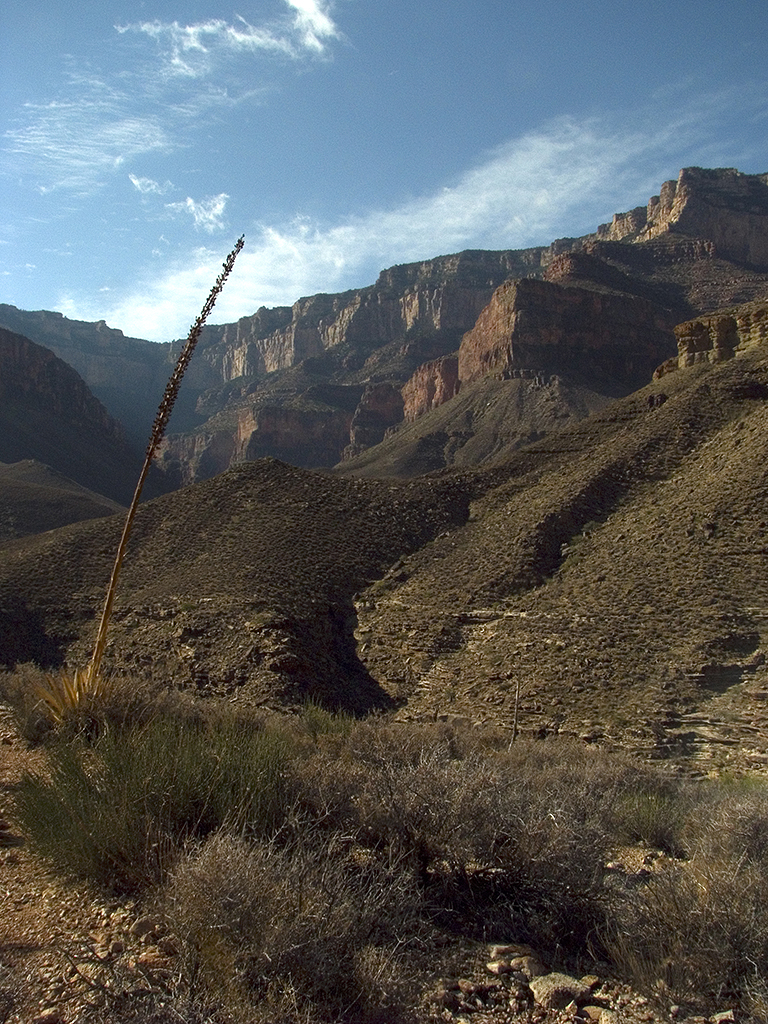 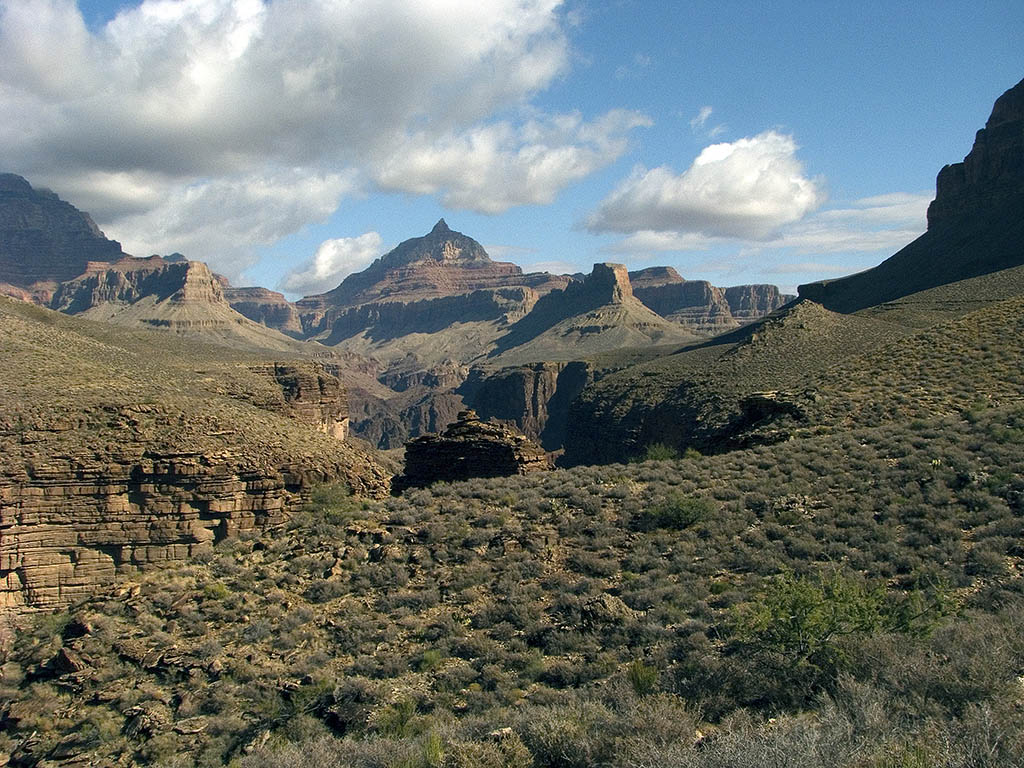 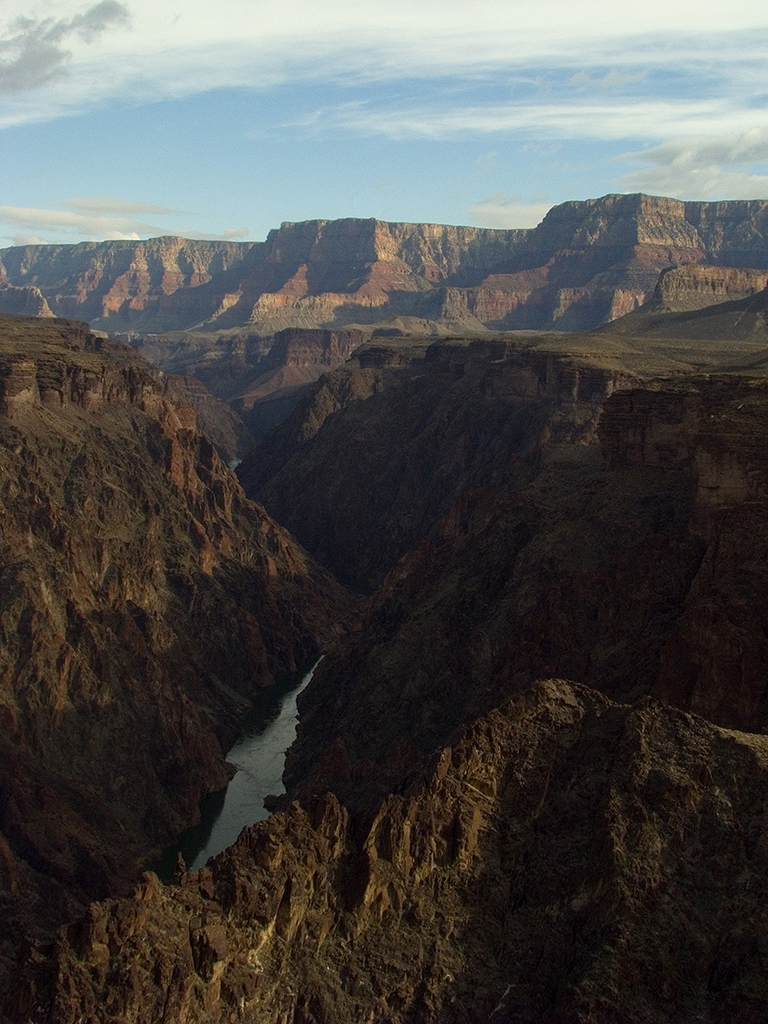 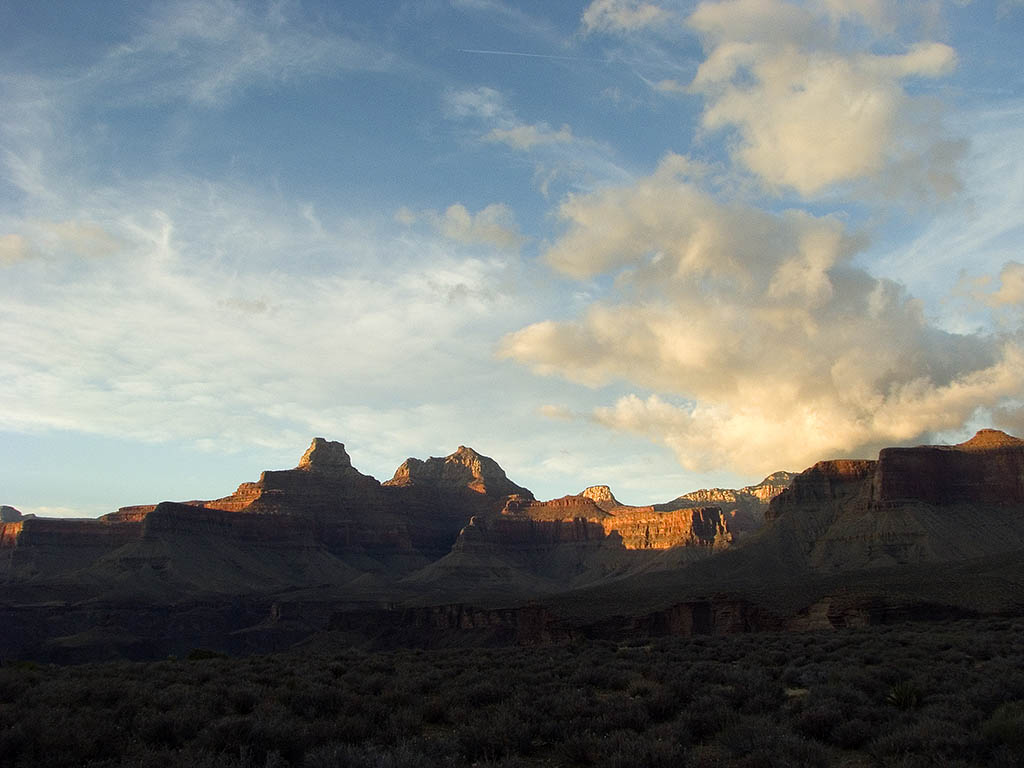 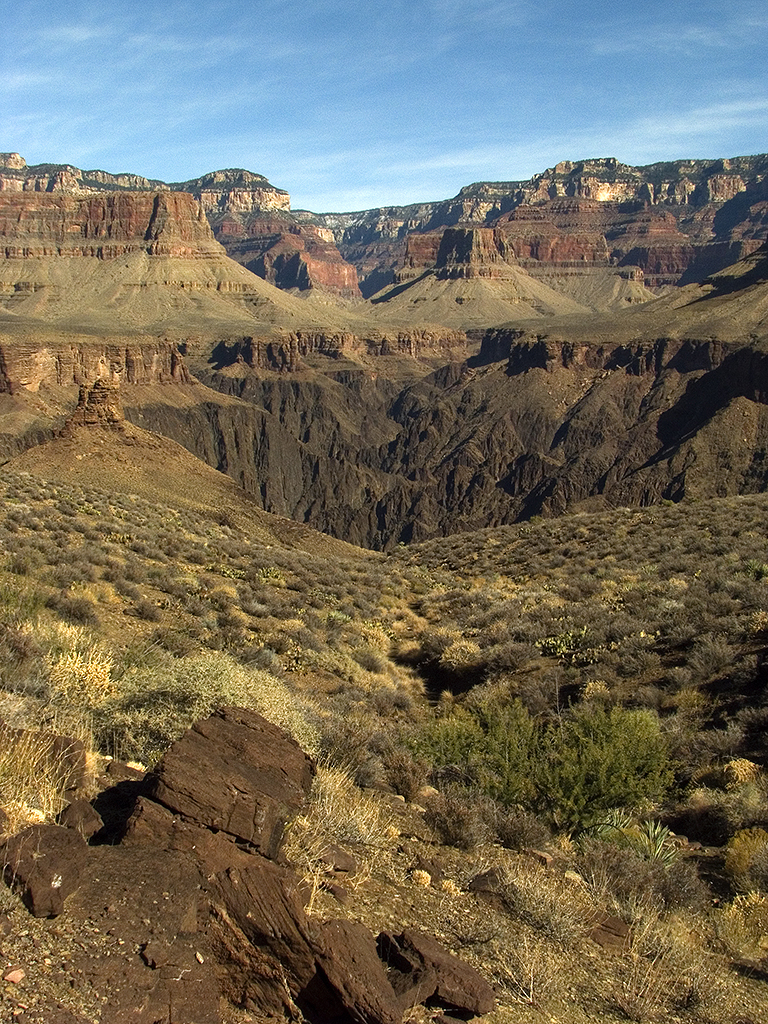 We initially planned to do the Boucher Trail, but with the amount of precip we didn’t want to be on such a rugged trail, and fortunately due to the weather there were a few cancellations so we were able to get permits for the Tonto East area over 3 nights.

Fortunately even though there was 4 inches on the ground on the rim, the trail was relatively uncovered, unfortunately, our visibility was about 50 ft. It was kind of cool though, even though we didn’t have any views for a while. It felt like some chinese based movie where they’re on a trail in the mountains, and it’s really foggy. It wasn’t until we reached a saddle that we had any view of the canyon, but it was short lived. Once we dropped further down the clouds became fleeting and finally we were completely below the cloud level.

After another few hours of hiking we made it to Cottonwood Creek. There were a few campsites after heading down canyon a ways, and we camped at one of the first, with some shelter from trees, right where the flowing creek came in. As you continue down towards where the Tonto heads East below Horseshoe Mesa there are a few larger, flatter campsites on the rock shelves above the creekbed.

After that, things were again very characteristic of the Tonto Trail. Never climbing much, or dropping much, but extensive routes to the tops of drainages, and back to the river, all at the same elevation. Grapevine is supposed to be one of the worst drainages to navigate around. At the beginning, the other side is very close, but to get there you have to go 3 miles up and 3 miles back, but this is the Tonto – flat miles that go by quickly. We camped before Boulder Creek, just around the corner from Grapevine, and had basically the same vista to hike to as we did the morning before.

Lonetree was my primary water source. It’s only been a week, but I can’t remember if I filled up anywhere else. The potholes in Lonetree were still in the morning shadows, and it was a huge coldsink, and was freezing!

Our next night was Cremation Creek, right before the area boundary line. Cremation was a challenge to get through after a few days of easy walking. Instead of maintaining a constant elevation here, you drop in and out of a series of canyons. Close to the top of the last canyon is a campsite with rock benches, a huge overhanging rock for shade, and a large flat spot to camp on.

From there the fun ends. It’s a nice climb up to the Tipoff on the South Kaibab and then the challenging climb up the South Kaibab. Foolishly I didn’t eat my granola for breakfast, and my energy stores tanked halfway up. I didn’t want to take myself on a blood sugar roller coaster ride by eating enough of something to get me the rest of the way out, so I put up with a shuffling pace, waiting for energy from fat stores to be freed up and muscle broken down for energy. It took a little longer to get out, but I did it. The total trip was just over 28 miles.

For Tonto Trail planning check out the All Hikers Website.