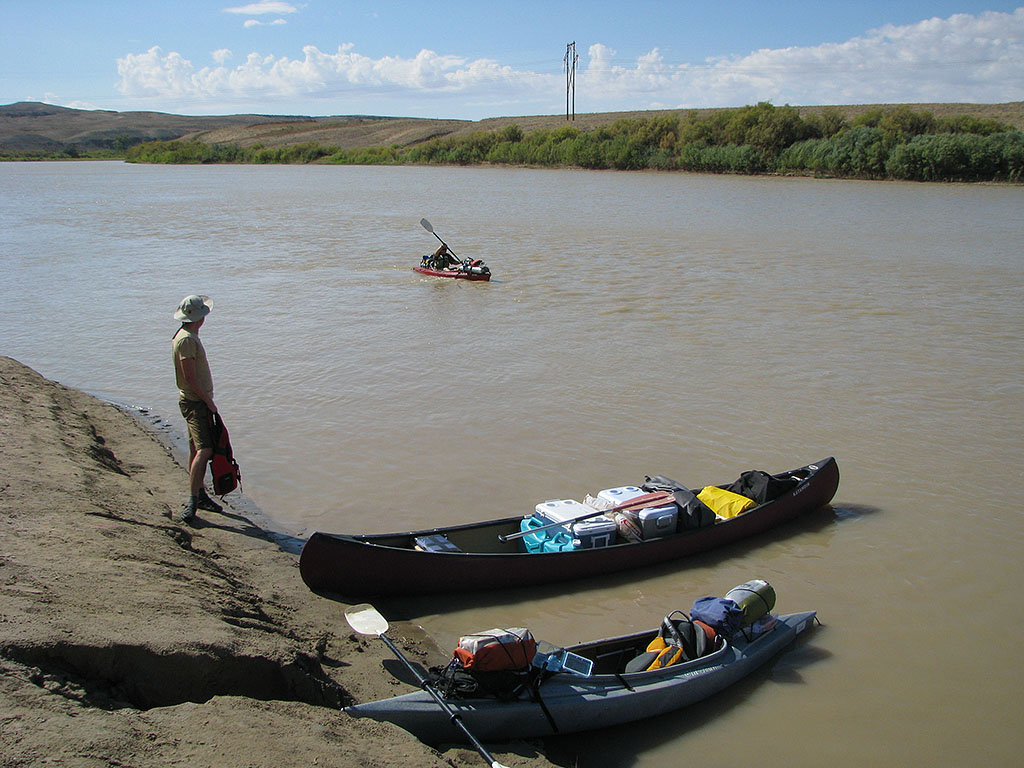 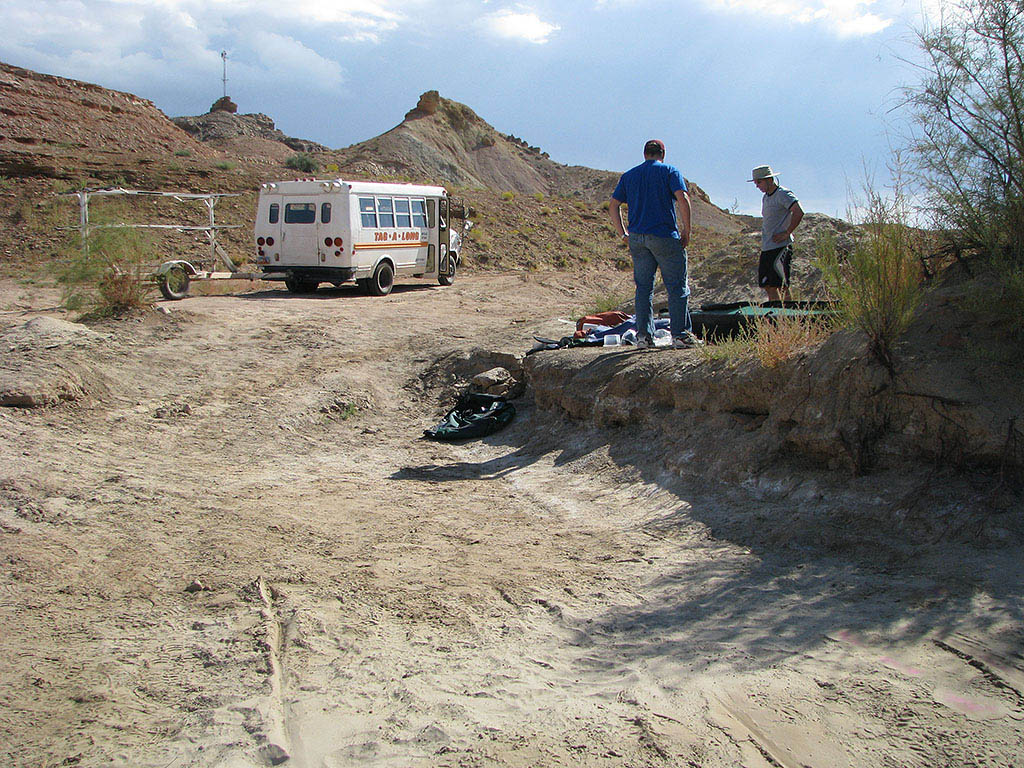 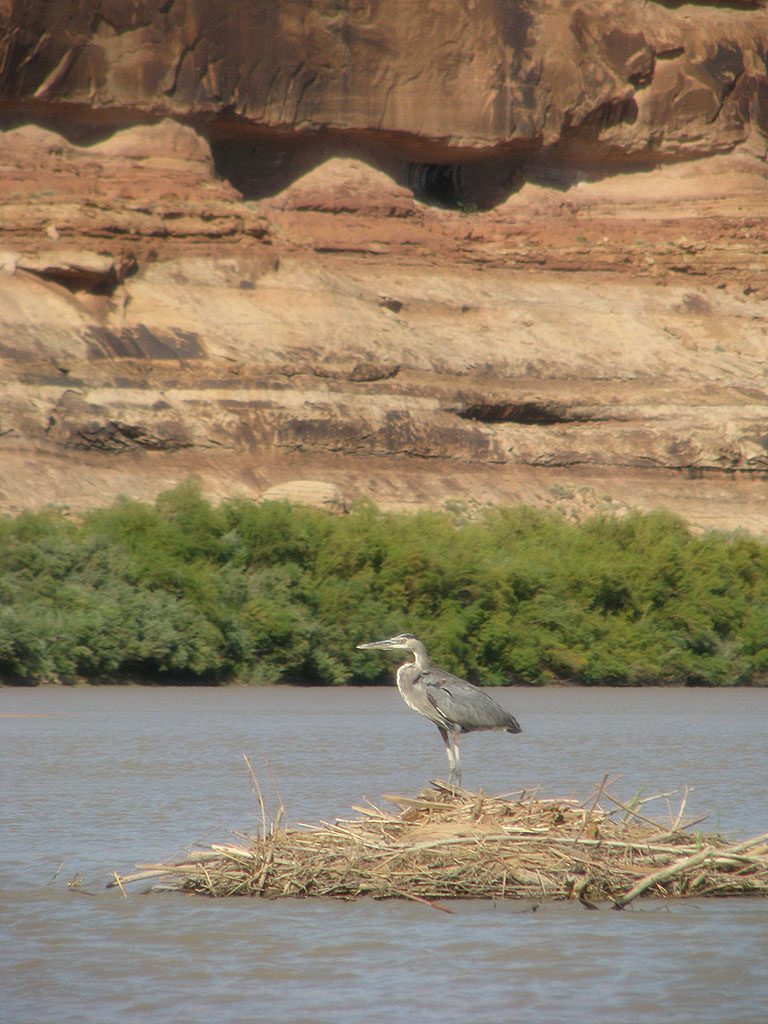 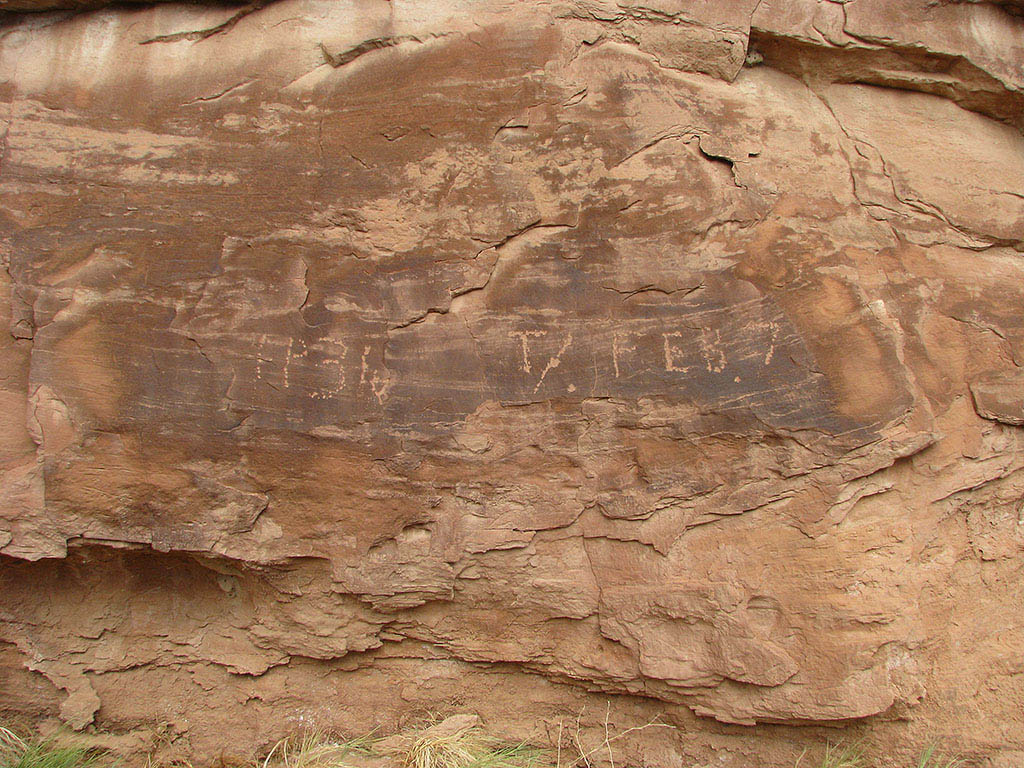 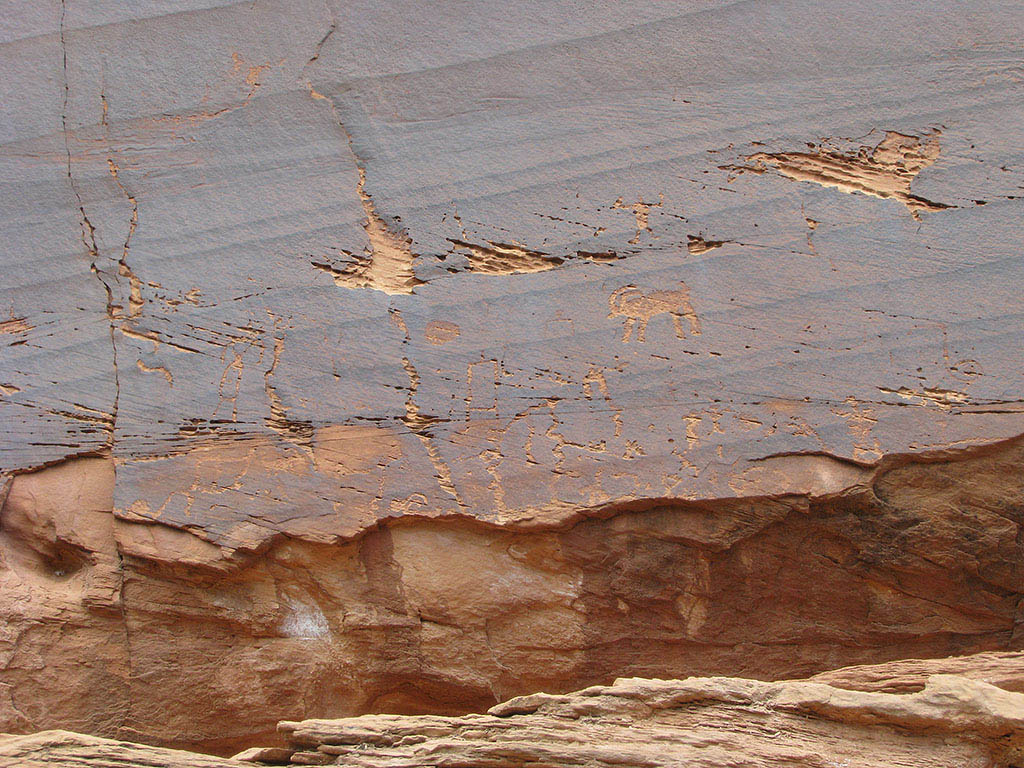 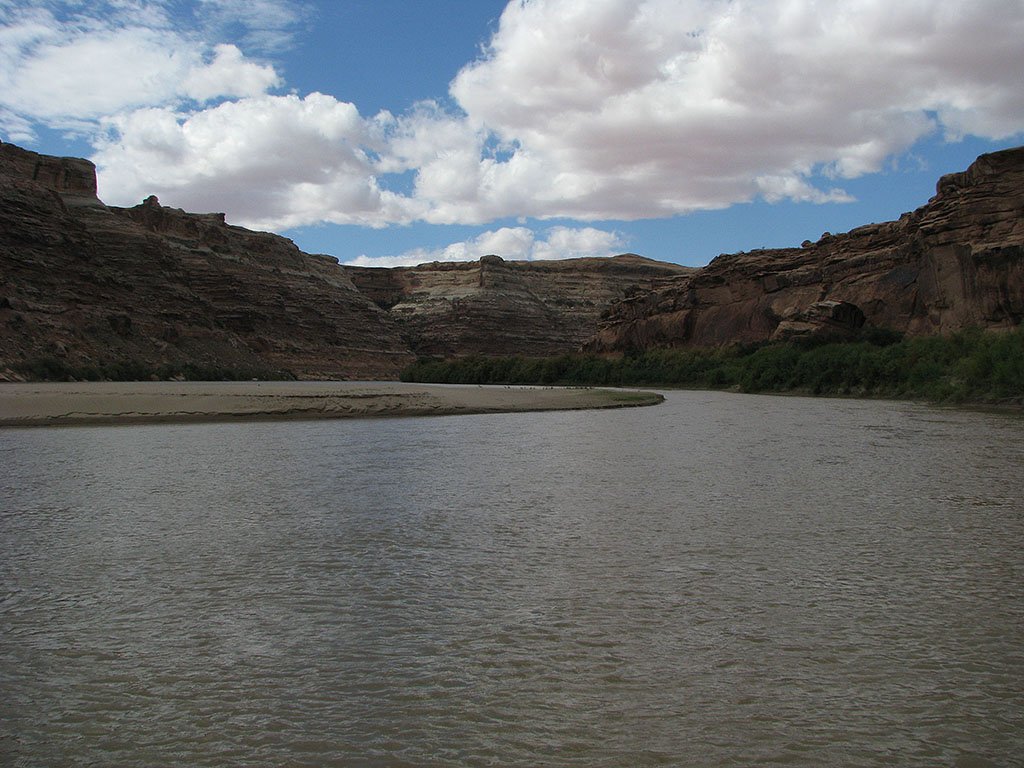 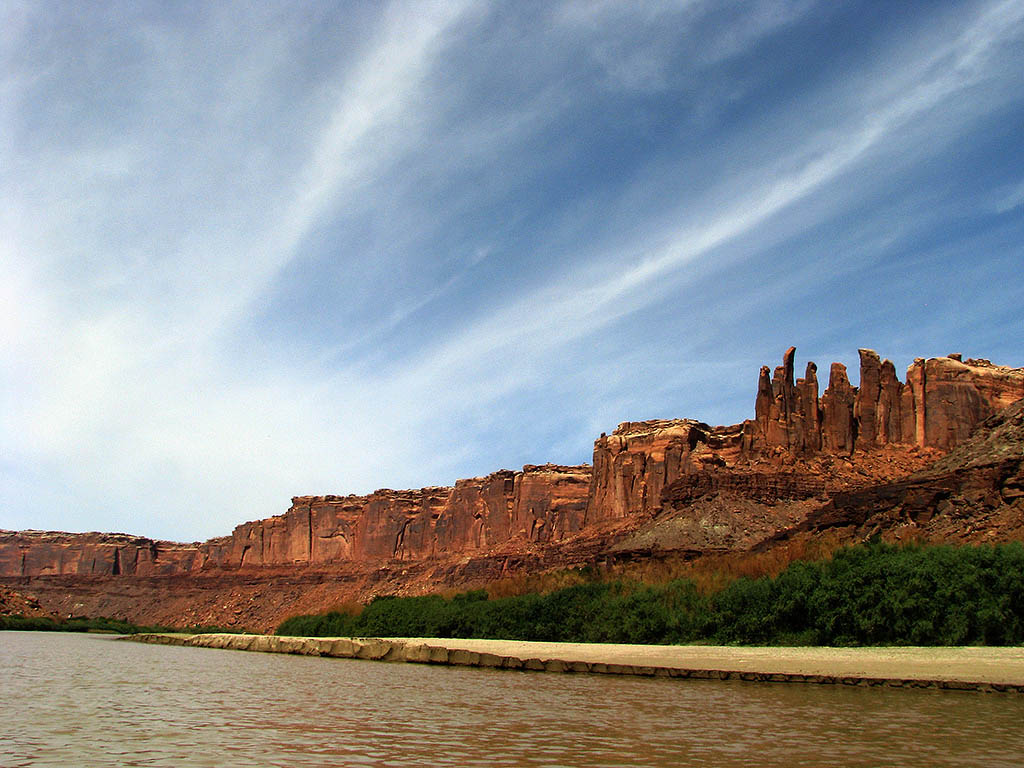 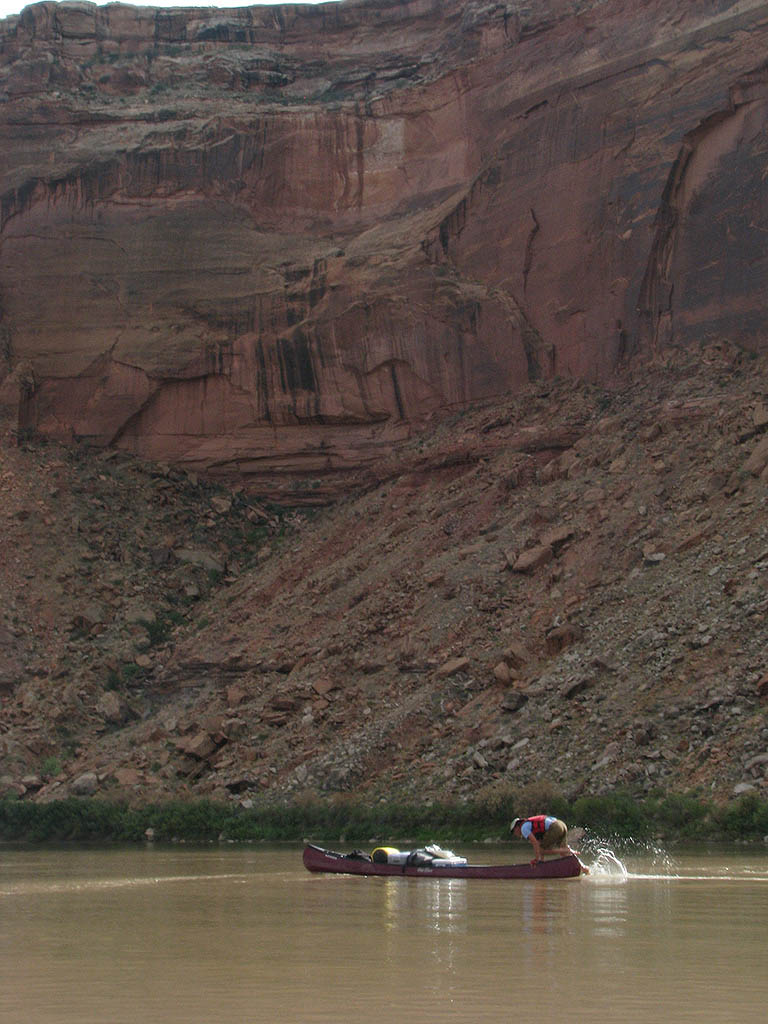 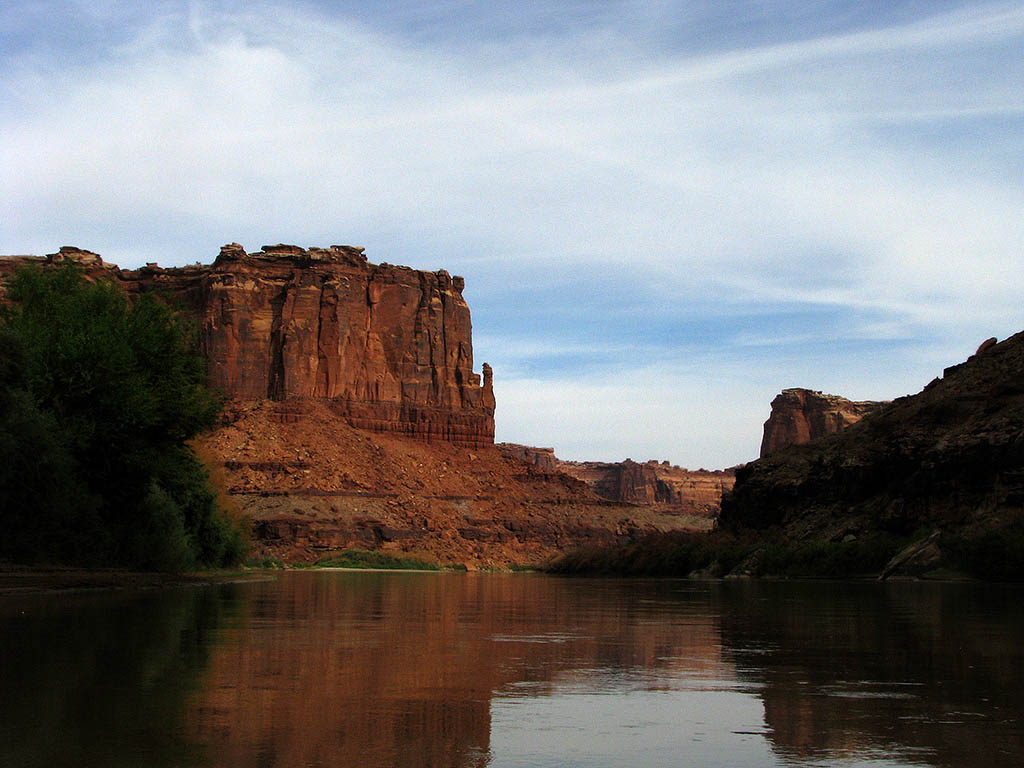 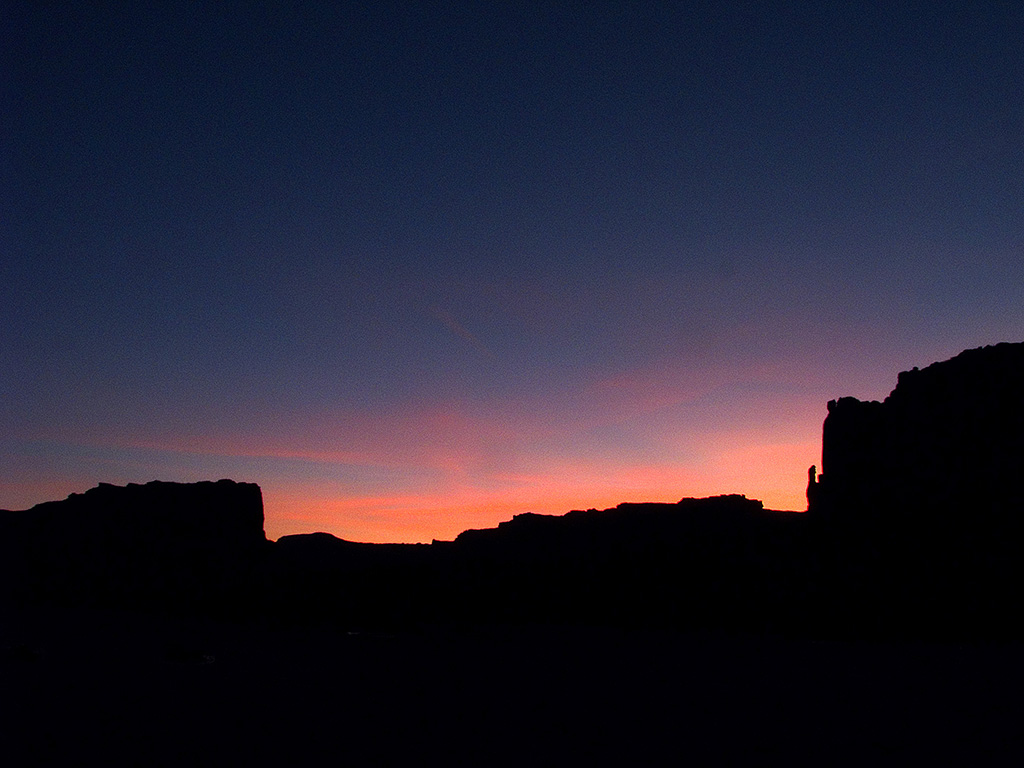 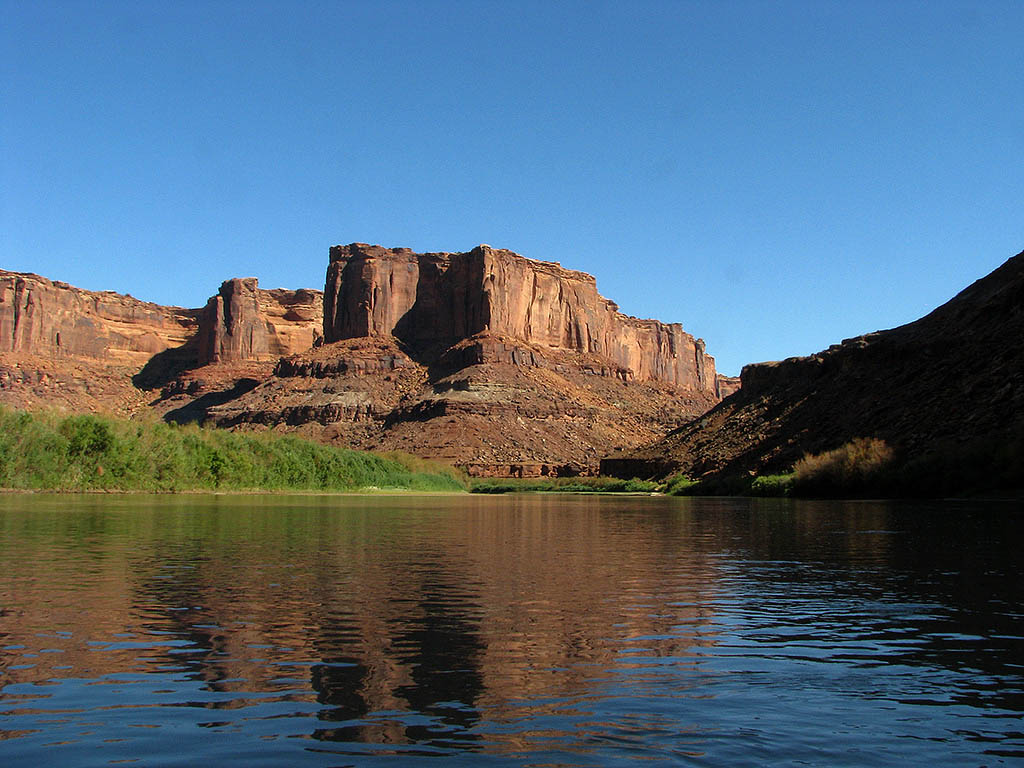 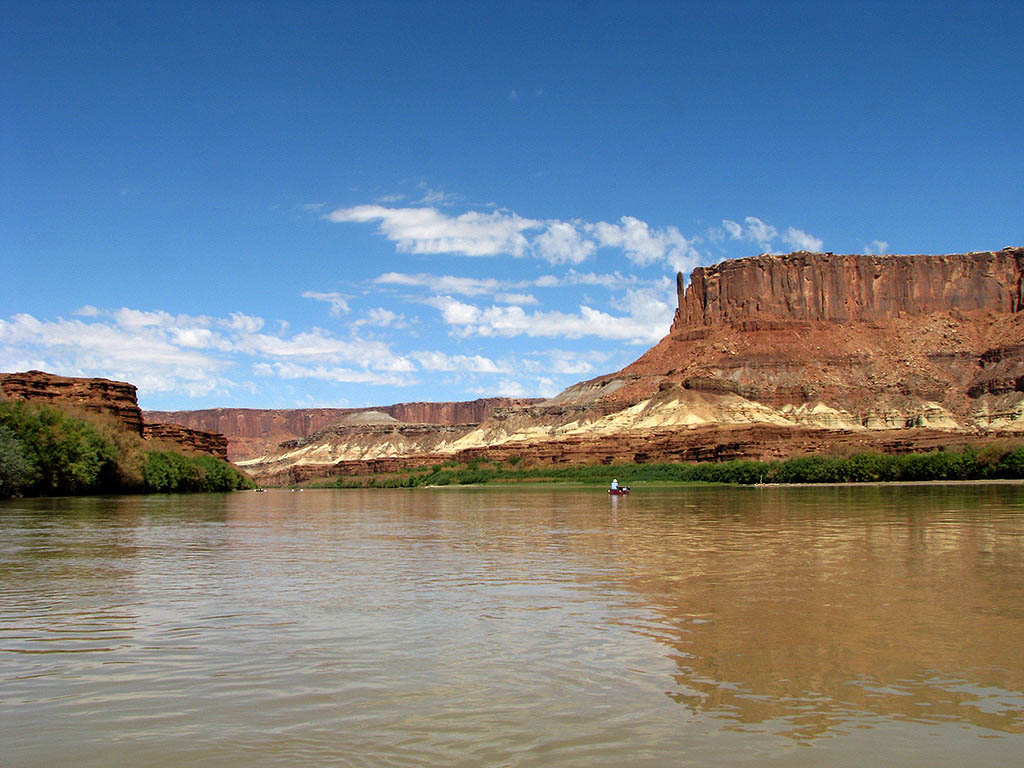 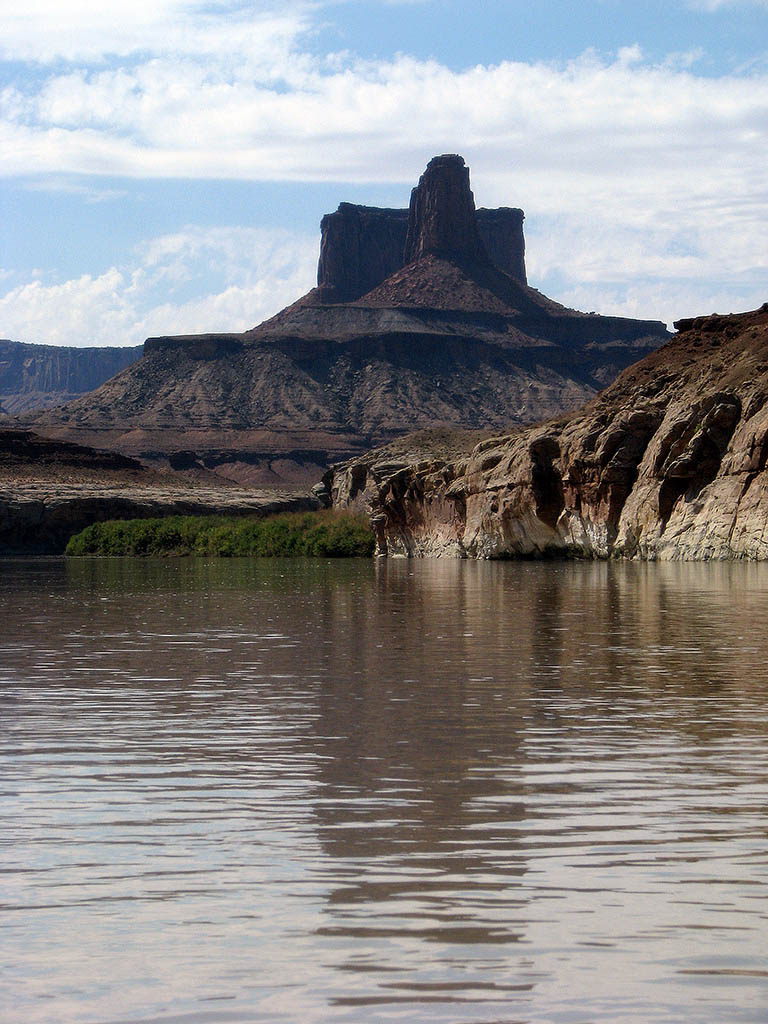 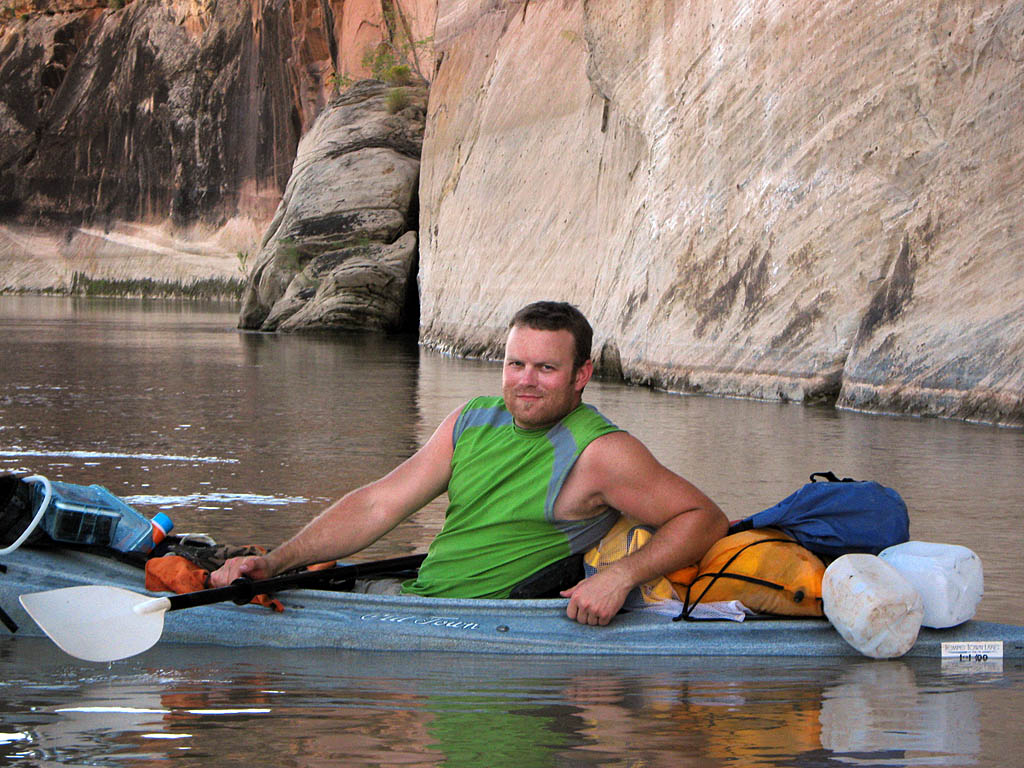 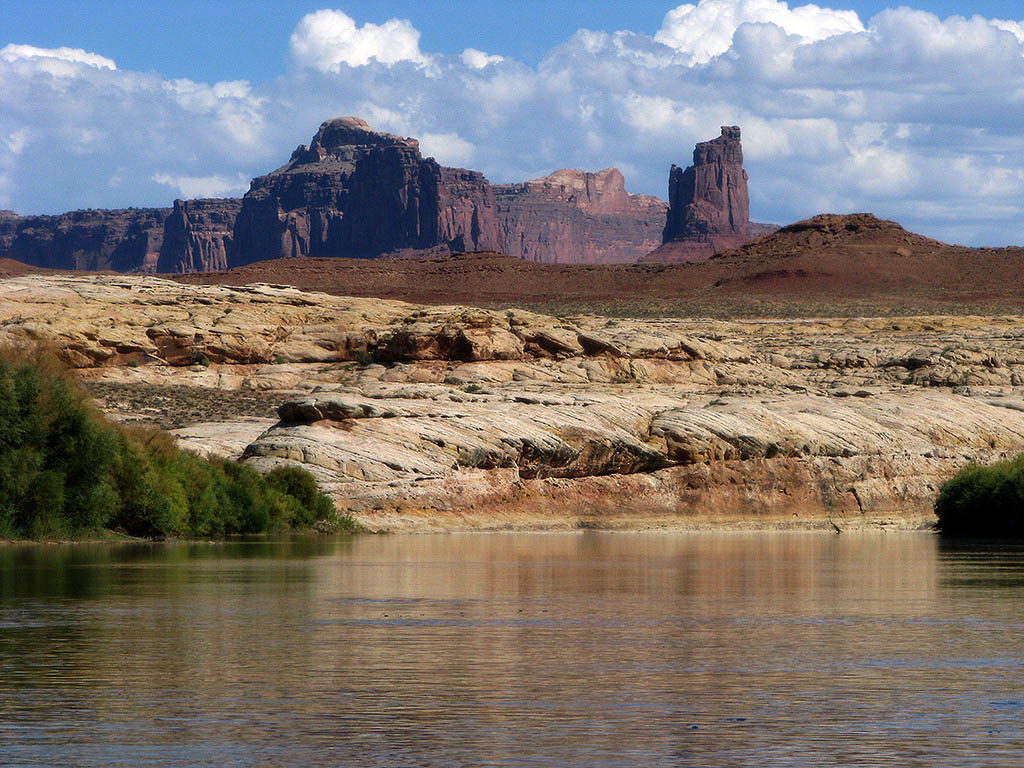 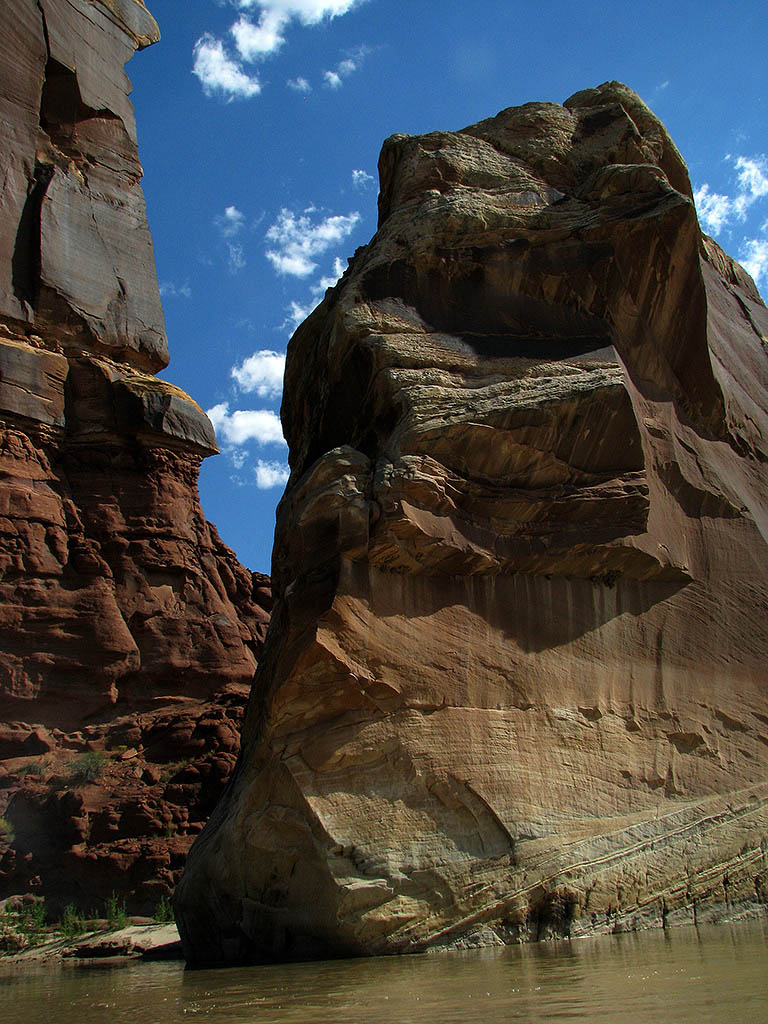 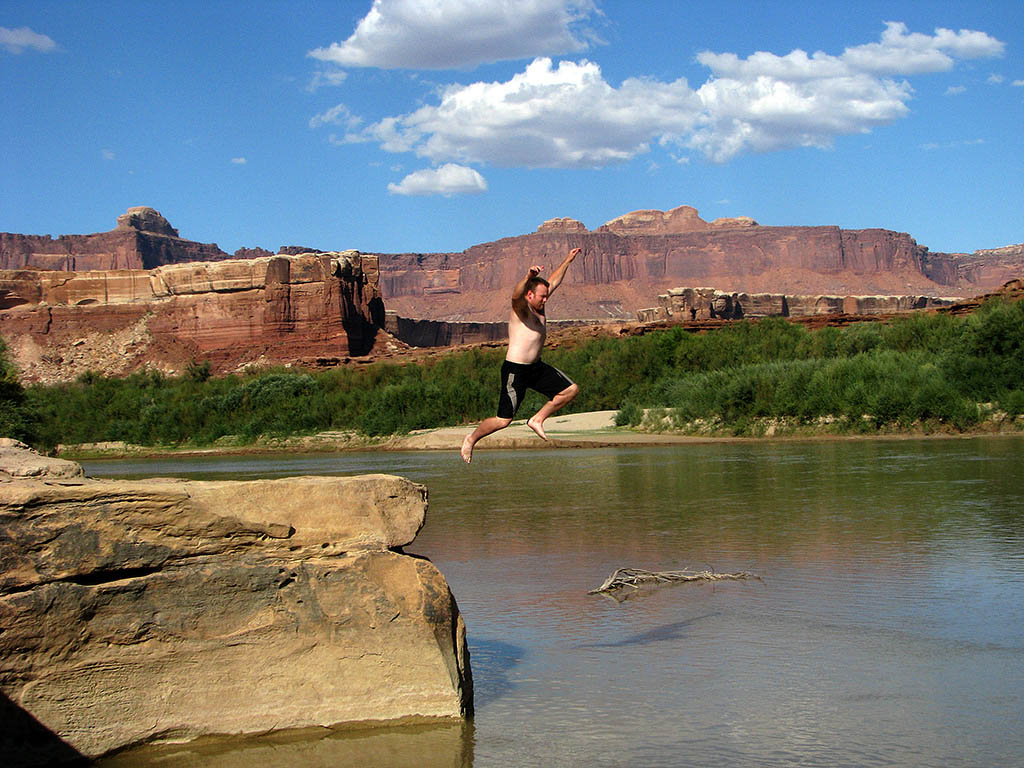 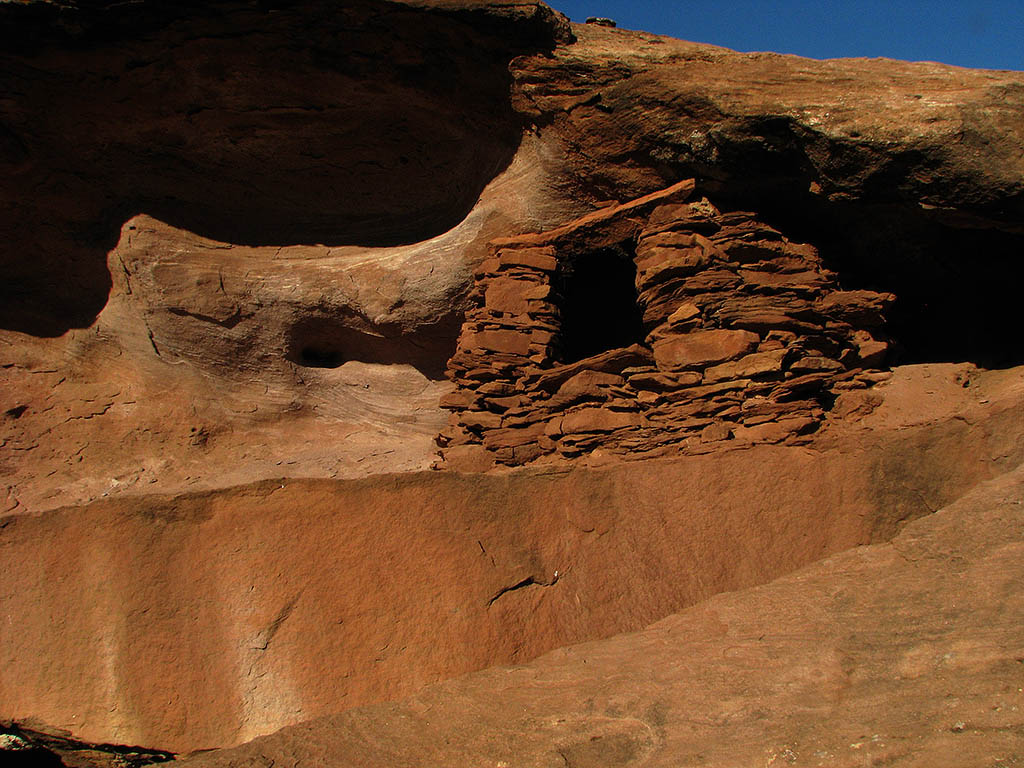 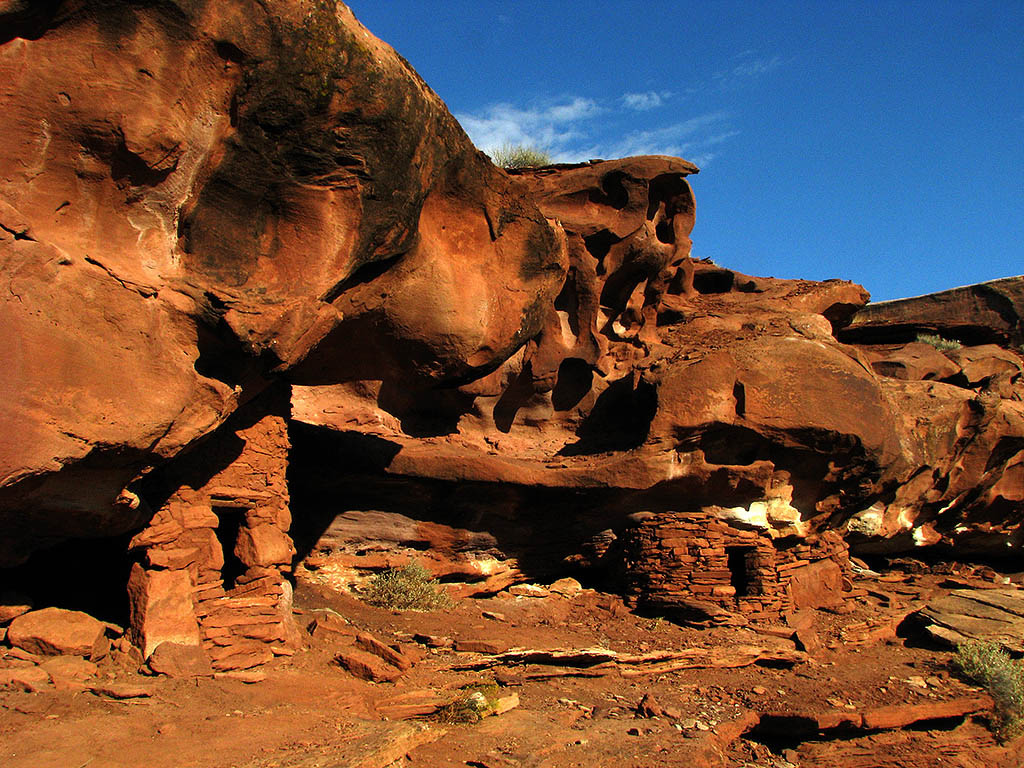 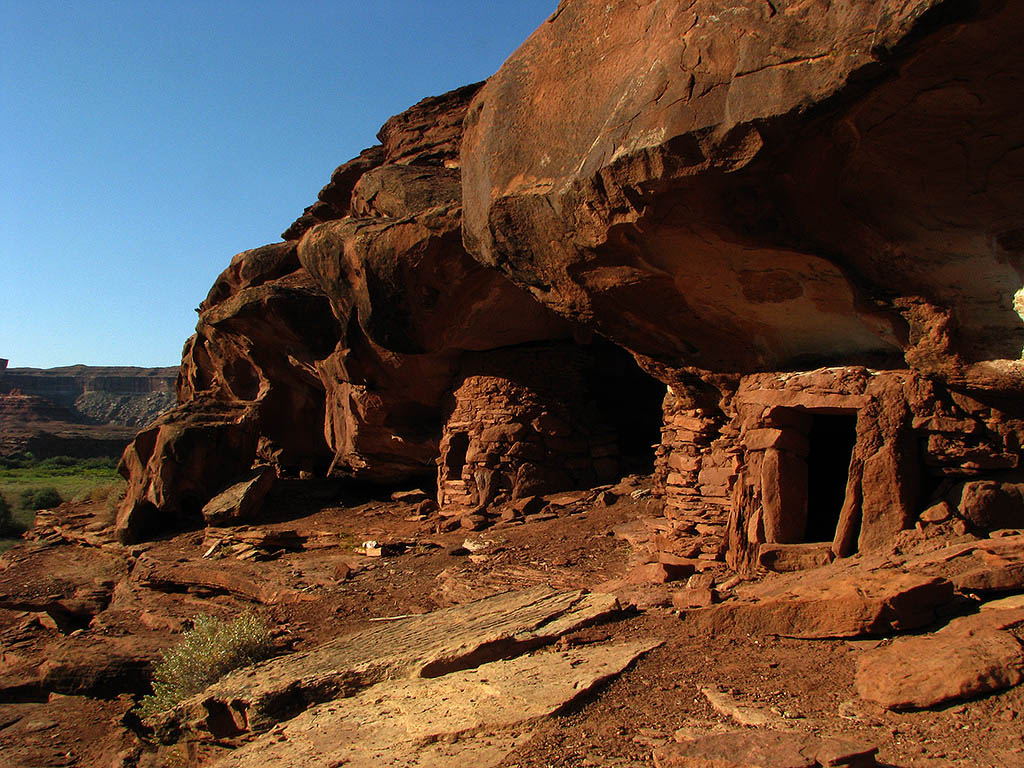 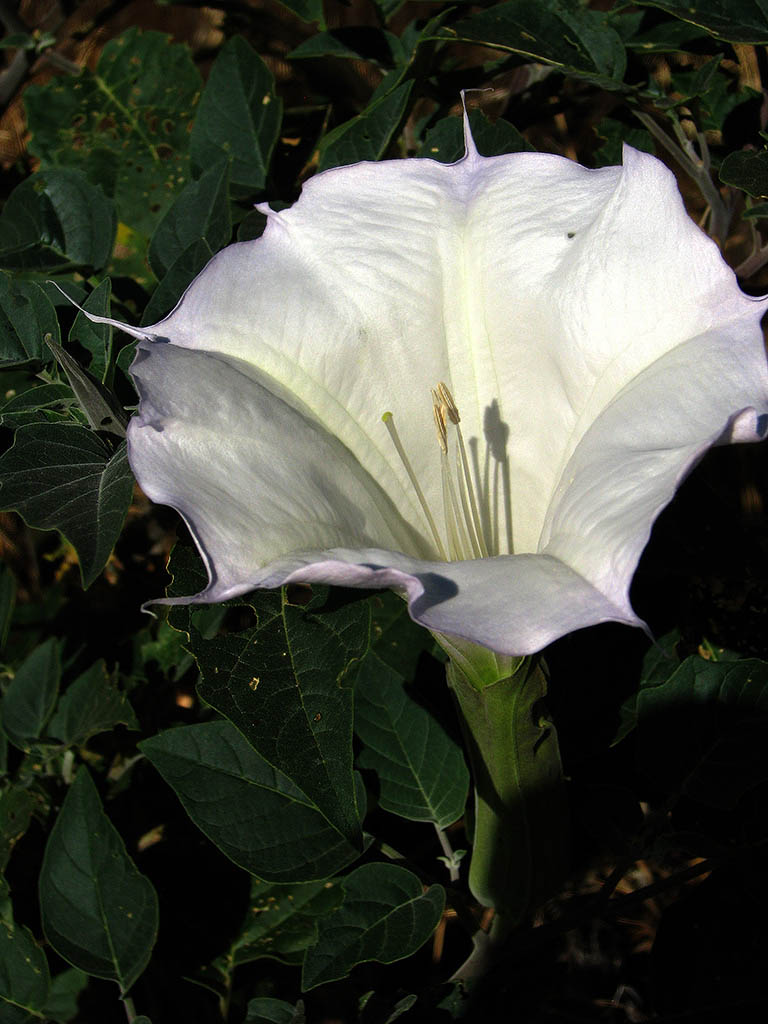 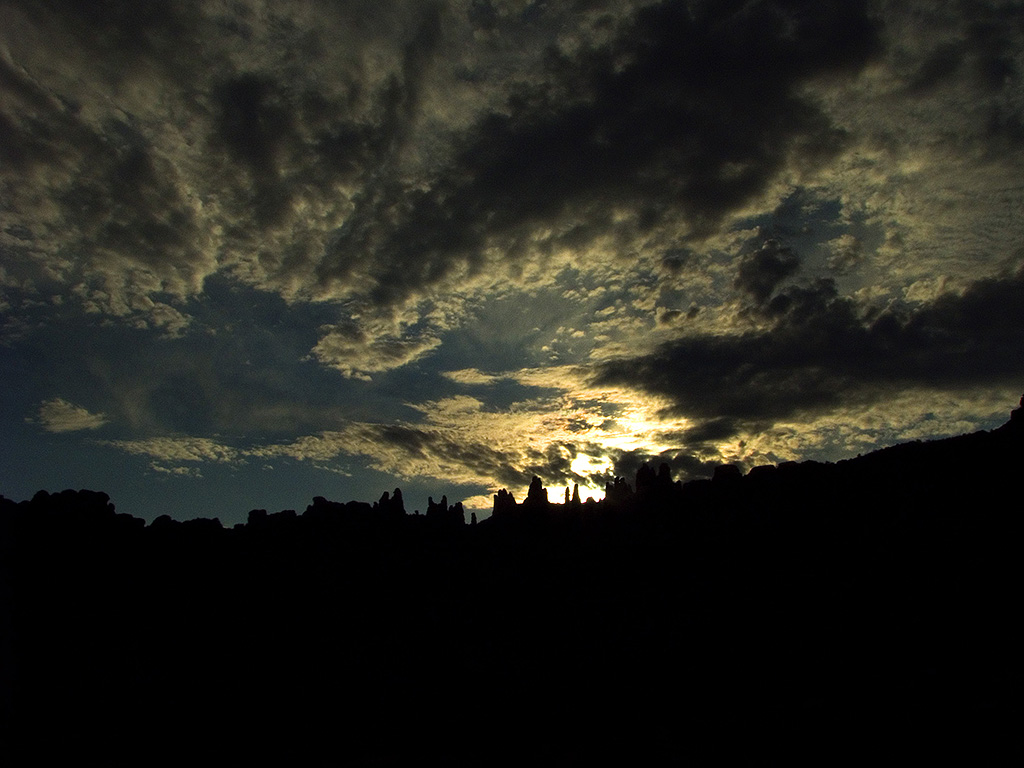 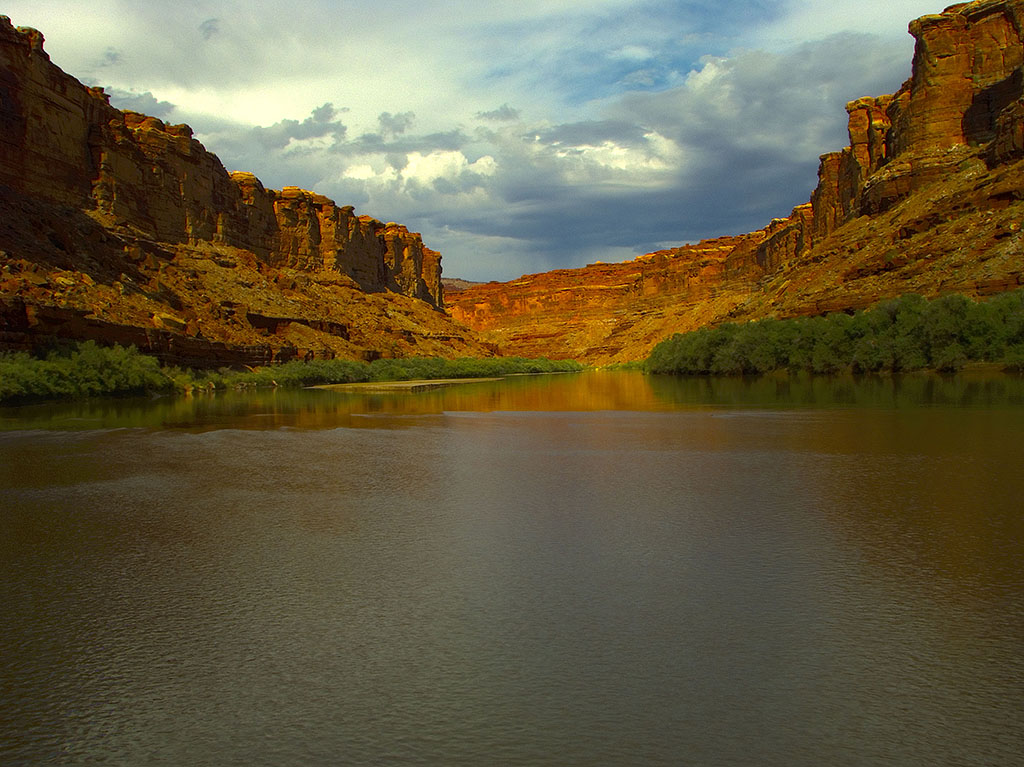 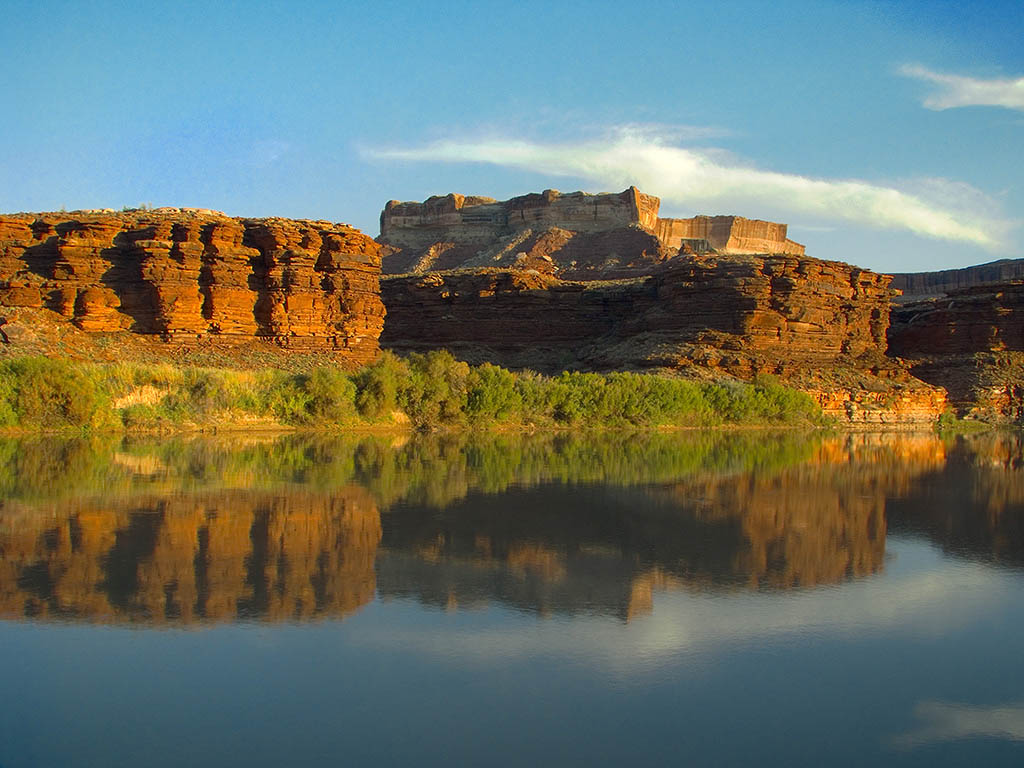 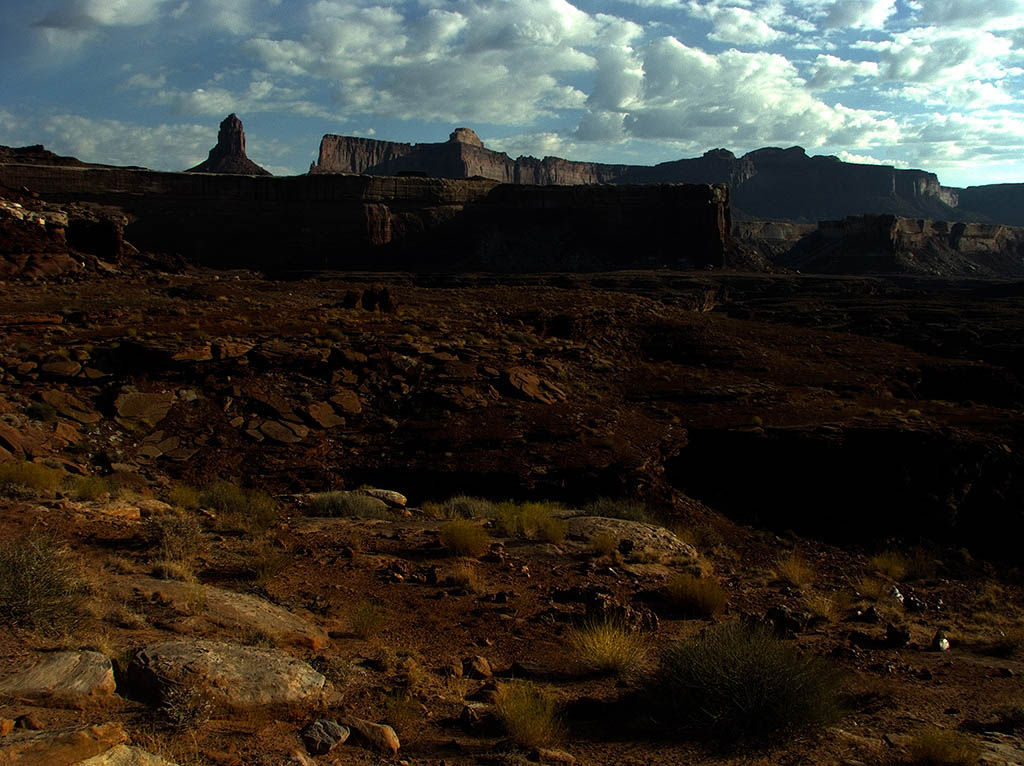 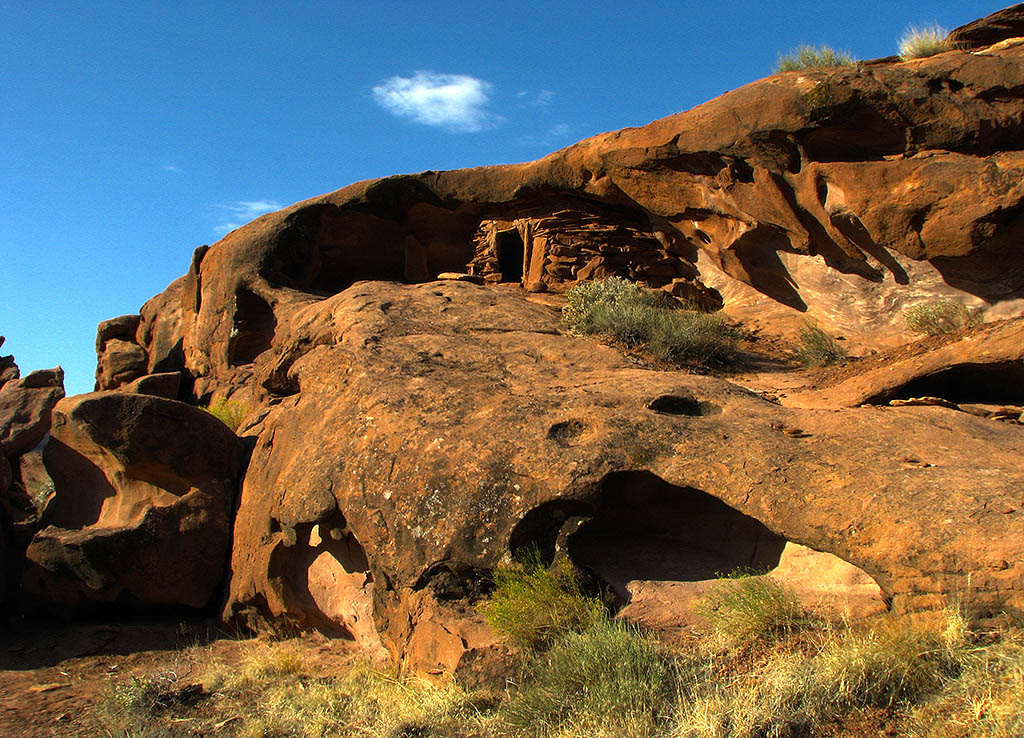 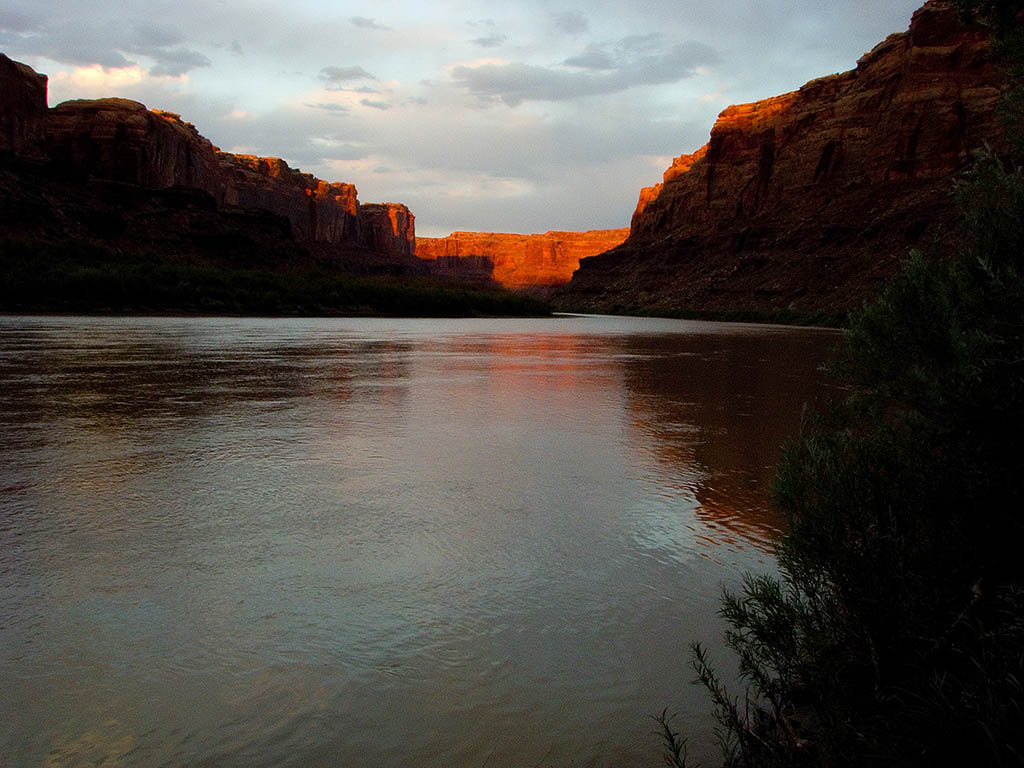 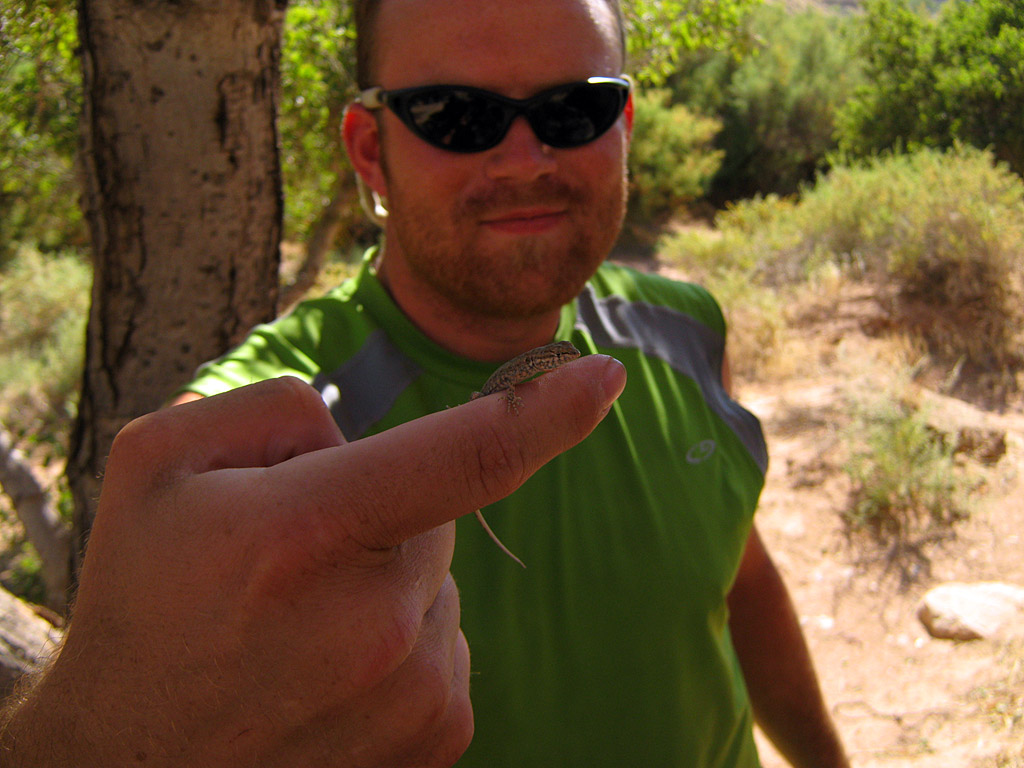 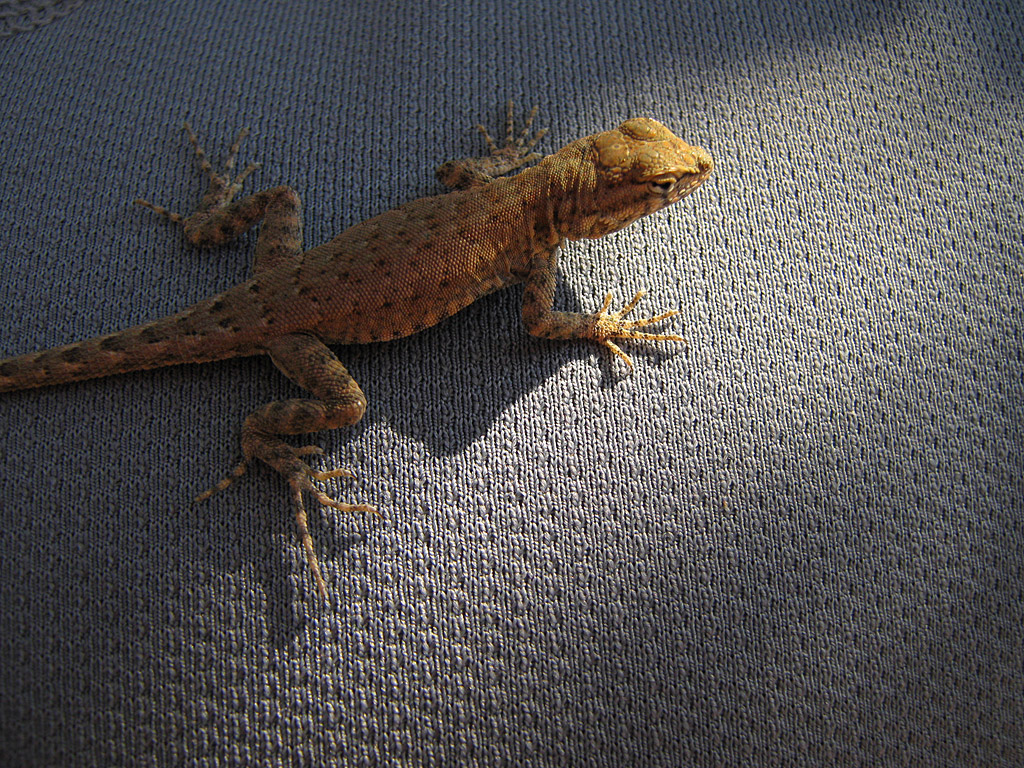 The time finally came to go on a super long trip. This was one of my most complicated trips to plan, logistically speaking, but that’s not saying much. Most of my trips are really simple to put together. The plan was to do 10 days on the Green River between the city of Green River, and the Confluence of the Green and Colorado River, traveling through Labyrinth and Stillwater Canyons. We setup a shuttle with Tag-a-Long to take us to our put-in and pick us up at the Confluence. I switched the put-in to be at Crystal Geyser instead of Green River State Park to avoid the hassle of dealing with a ranger. It also cut off a few mundane miles. If I could do it over, I would just put-in at Ruby Ranch and shave off a few more miles. There is some interesting stuff between Crystal Geyser and Ruby Ranch, but not enough to be worth it, in my opinion. The Labyrinth permit is free, and filled out in duplicate, and one is left at your put-in, the other taken with you. The Stillwater permit is $20 and there’s no limit to how many groups are on the river, so if you request a permit, you get it. That’s totally different than other permit systems I’ve come to know from our National Parks.

We took 3 kayaks and 1 canoe. Fortunately we had the canoe for carrying stuff like coolers, and a camp stove. It made things a lot nicer. We were at Crystal Geyser for a few hours getting our boats loaded up, and hoping that the geyser would go off. The wait paid off, and the geyser went off for about 10 minutes, shooting in short and tall bursts. Our shuttle driver waited around to make sure we could carry all our gear, but we managed to get it all in. I didn’t have the advantage of having the kayak I was using to do a dry run with packing, so I’m glad that all of my stuff fit, and didn’t weigh me down too much.

So we took off, and started down our long journey through the canyons. The current was slow at 1.5-3 mph depending on the section, so we paddled, a lot. We went through some class toddler rapids almost from the start, then everything was smooth. I knew we should expect some wind to deal with, but what we got the first 3 days, was over the top. The wind would make 12â€ waves that we’d be powering through, trying not to come to a standstill, or even worse, blown backwards. After the first 3 days though, the winds weren’t bad at all.

We had to carry all of our water, so at 1 gallon per person per day, it was a lot of water. I was cooking my lunch with river water that I filtered through a bandanna to get rid of the larger sand particles. The remaining silt was unnoticeable in the cooked food. Notwithstanding, we had a collapsible water bucket that we used to let river water settle out overnight, then we ran that through a water filter for dinner the next night. If we had two buckets we probably could’ve gotten away with not carrying all our drinking water â€“ but filtering is such a pain.

We didn’t encounter any other people until we made it to the Trin Alcove, then we saw them taking off before we got there. We didn’t see them again until we were at the Bowknot Bend. They had camped at the site where the trail is that leads up to the divide. They were only doing Labyrinth, and had a large raft, and a ton of kayaks.

That night (night 3) we slept on a big sand bar, on our own island. The sunset was incredible, and someone had sculpted mud into a frog, a mouse, a little man, and something else. It was fun to be on our own little island.

When we got to Mineral Bottom, where there is a take-out, we didn’t see anybody there. I was expecting to see a ranger, maybe a backcountry office, or something since some people mention talking to rangers there in their trip reports, but there were only a few signs, a few registries, and two pit toilets. So we had lunch there, and kept on going through Labyrinth.

When we officially entered Canyonlands the landscape opened up and we were out of Labyrinth. Stillwater wasn’t as scenic as Labyrinth, but the far-reaching vistas of Canyonlands were cool. The cliff walls were fairly short until we got closer to the Confluence. It was here that we first started seeing people again. The first were on a sandbar spying on us with some binoculars. We later found out that they were looking for Tag-a-Long branding on our boats to see if we were the group they were taking out with. We didn’t rent our boats, so they didn’t know till we met in person that we were. We kept on until we got to a site further down the river where there are some ruins and an old cabin. We shared the beach with a man and 5 women in one group, and two guys in another group who read the bible out loud non-stop.

When we stopped for lunch the next day, a raven descended on our boats. It grabbed an empty trail mix bag and took off before I got down to them and tried to take off with it. It had a hard time doing that since the bag was half its size. Another raven came, and opened a zipper and tore into a small ziplock full of trail mix, and took off. I don’t like ravens. They still haven’t gotten into anything of mine, but I know they want to, and I don’t want to give them the chance.

We hit a class 1 that day. I thought there was only flatwater, but it was really nice to see a small amount of action on the water. We had a massive campsite with tons of cottonwoods perfect for hammocks, and lots of shade, but it was a long walk from the boats through a tunnel of tamarisk. So we camped on the beach where it was cooler, and hung the hammocks up in the cottonwoods. The bible boys camped on a sand bar close by, and the group of women were further upstream. The bible boys kept on reading and talking away into the night.

The next day was really short as we were only going as far as the Turks Head so we could hike to the ruins. There was a great rock for jumping into the river there with 6′ deep water, and a sandbar beyond that. The tamarisk didn’t have a chance to encroach on this campsite. We camped on a 15′ cliff. The next morning when we went up to the ruins, the trail was faint, and due to the ground cover of tiny rocks, was going to stay faint. I did some serious cairning to help future guys find their way. There were around 5 ruins of grainaries there, mostly intact overlooking a broad desert landscape with the river flowing around the bend beyond that.

We met the guys with the binoculars the next day and camped just downstream from them. The cliffs were starting to get tall again, and we were less than 10 miles from the Confluence. We had a fat squirrel in this campsite. I threw rocks to drive him away, and when he came back I chased him out of camp and threw rocks until he was a good ways away. It still came back and was rummaging around a tent out of view. After it was chased away twice from there it didn’t come back.

The Confluence is an interesting area for the water. The blending of two waters with different levels of silt, and temperature produced bursts of water that would break the surface and push out the water that was on top. The water wasn’t much faster, there was just more of it. We floated through another class 1 and then made camp at Upper Spanish Bottom with our neighbors from the previous night. We paddled down to Lower Spanish Bottom to check it out and hiked down around the bend to where the first whitewater in Cataract Canyon is located. It looked fun. I don’t think it would be much fun in a raft, but in a kayak â€“ definitely. Paddling back upstream, only half a mile, was exhausting, and gave me my first real workout since battling the winds at the beginning of the trip. At least the current wasn’t so swift that we couldn’t make progress against it. As much as I want to kayak through Brown Betty Rapids, and the rest of Cataract someday, I want to build some skills before I tackle those rapids.

Shortly before our jetboat came to pick us up a group of two couples came up and landed just upstream from us and annoyed everyone within a mile with their bickering. I guess 4-5 days of non-stop contact with each other is too much for some people. It made me really, really glad that my group was very chill. We were hoping that they wouldn’t be on our jetboat….we were wrong. Thankfully the jetboat was super loud. We zipped on up to Potash in about an hour and a half. The jetboats can get up to 40 mph on the water. Maybe faster. The jetboat from there was towed back into town by our bus â€“ where we found that a hotel was being built next to Tag-a-Long, and when we left there was only an empty lot. Nothing like seeing an entire first floor of a hotel being all framed out on a foundation that didn’t exist when we left to remind us how long we were gone.

It was an awesome experience. I can’t believe how fast it went by. I’m really glad I did it.