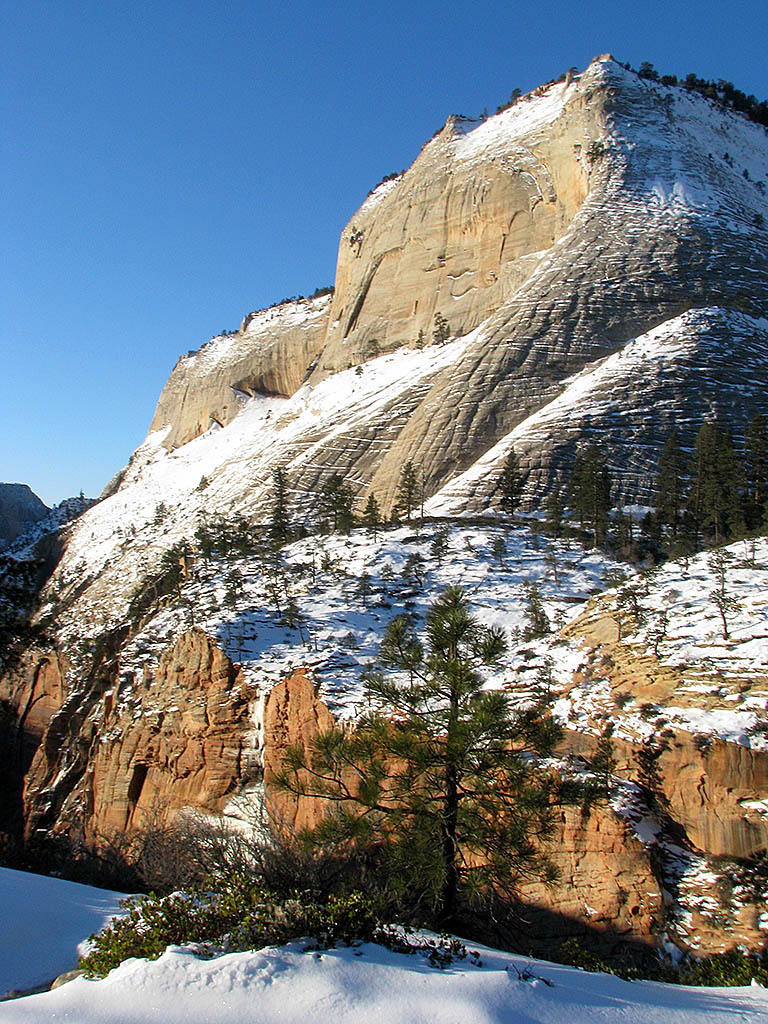 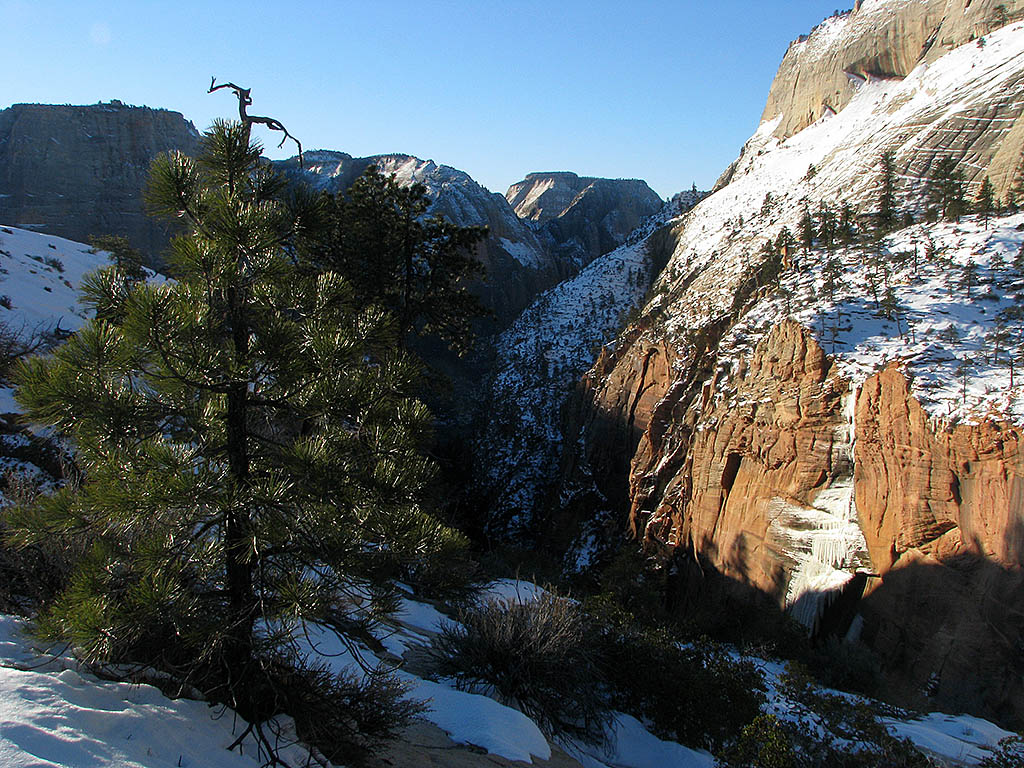 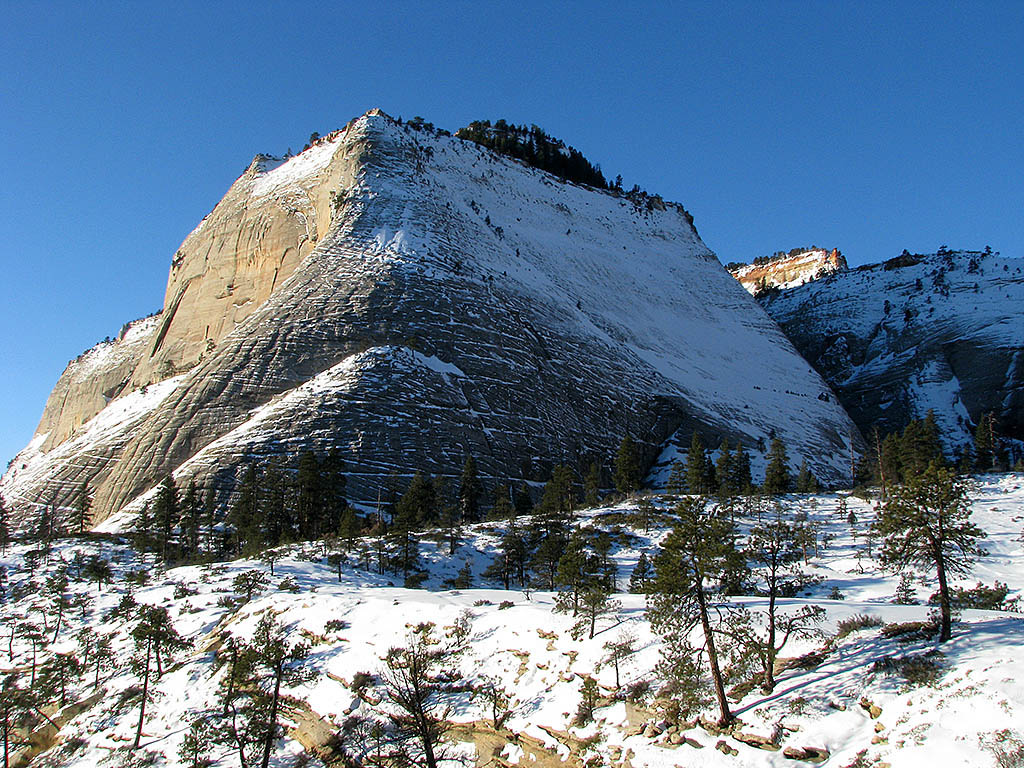 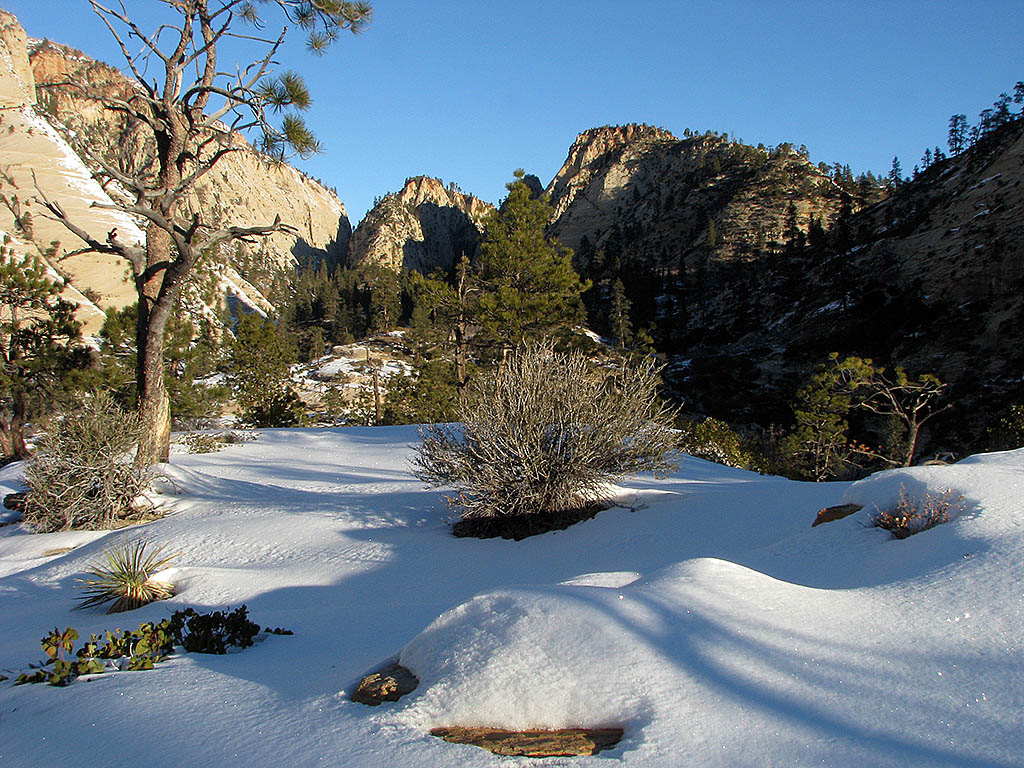 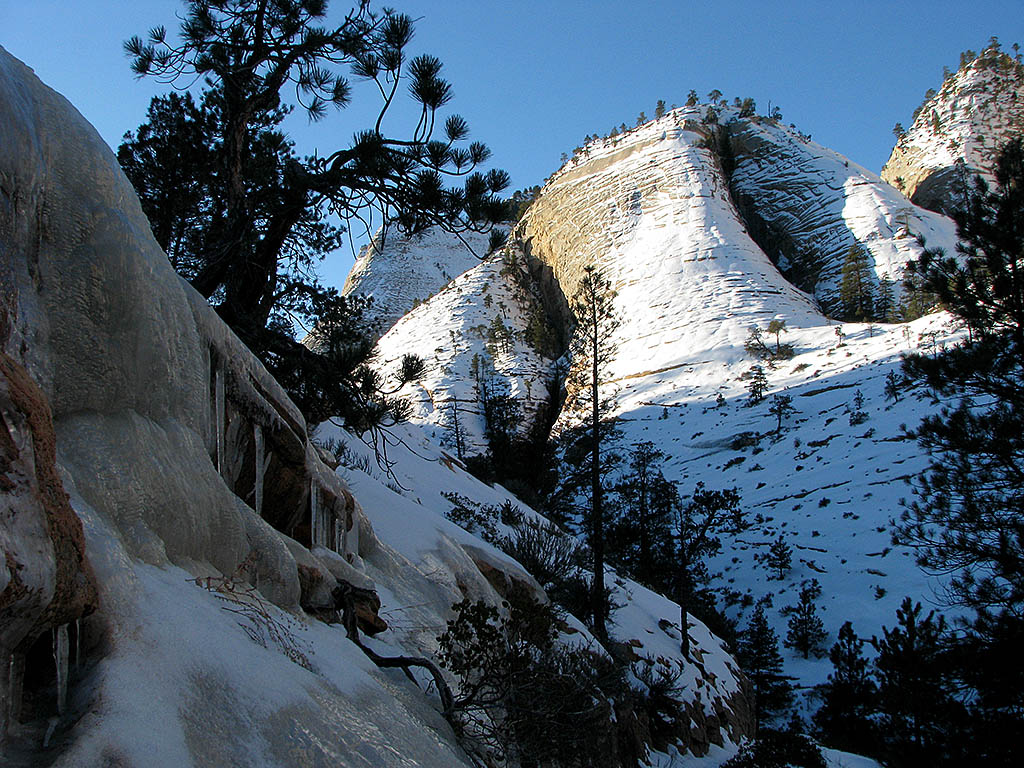 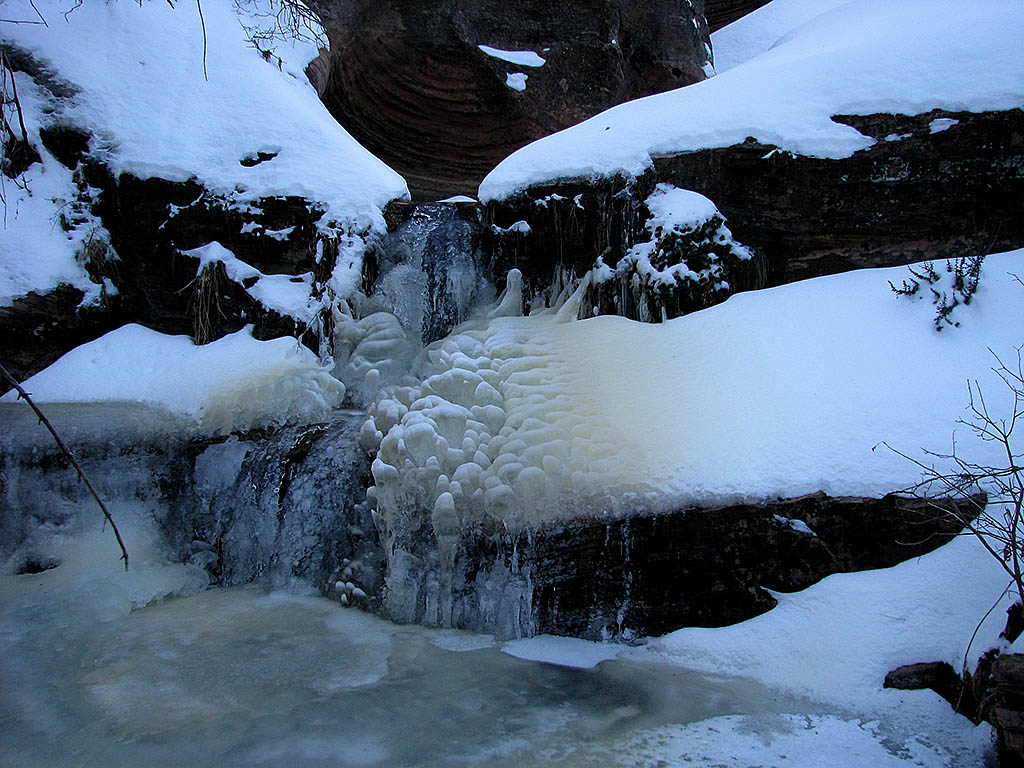 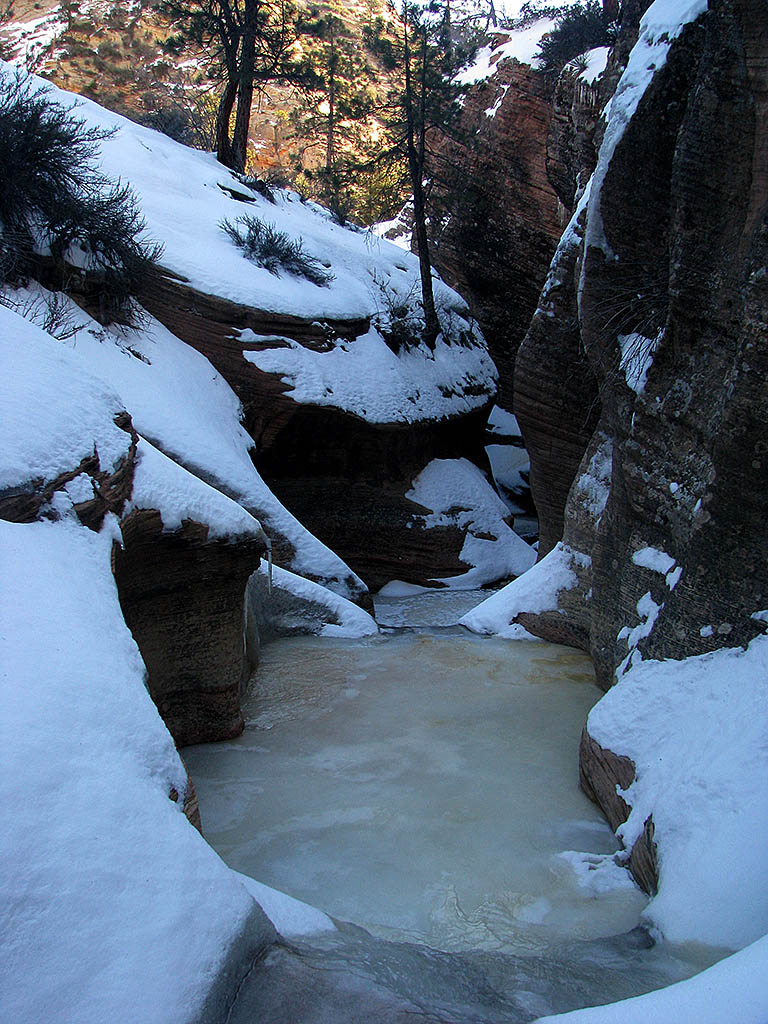 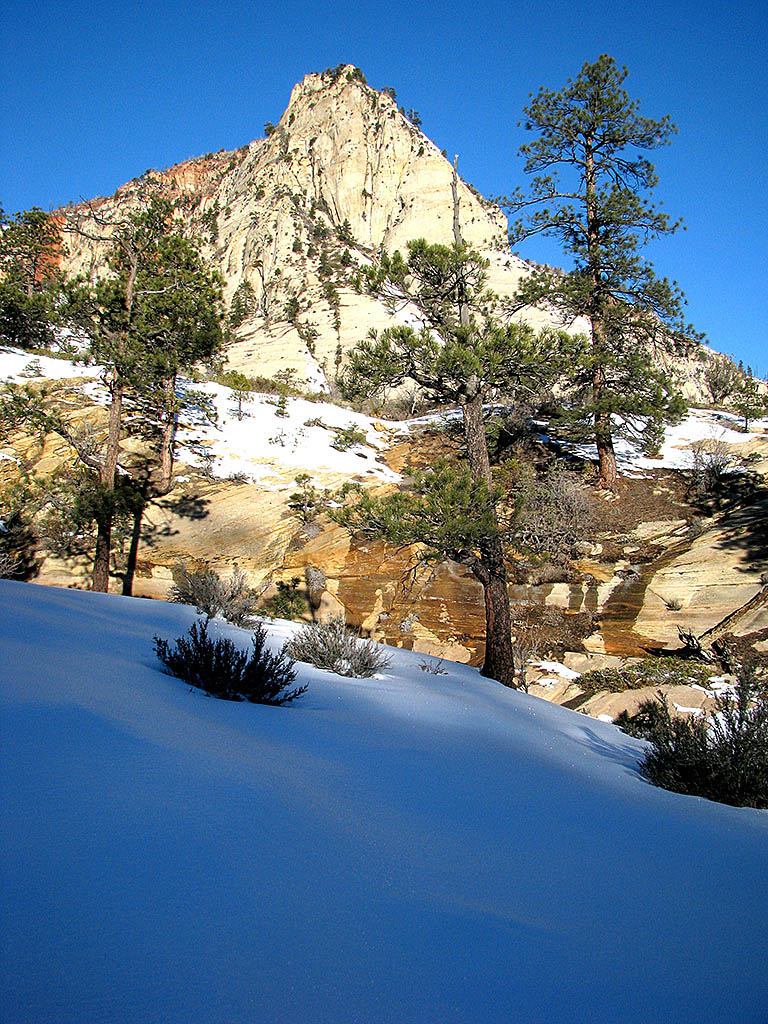 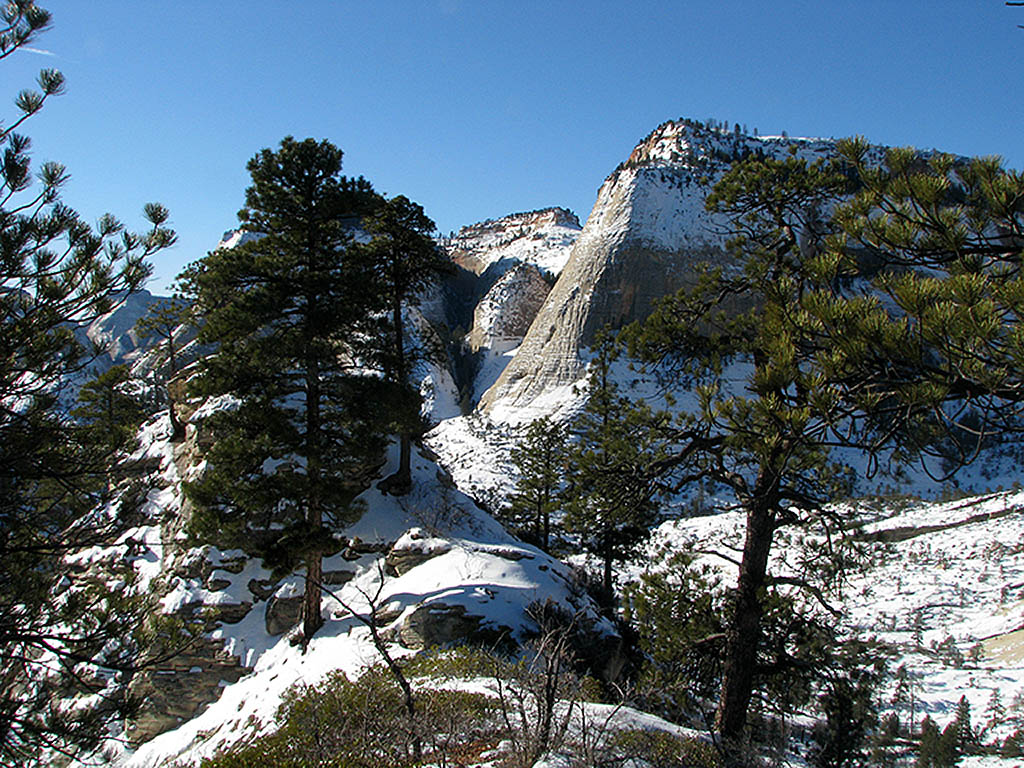 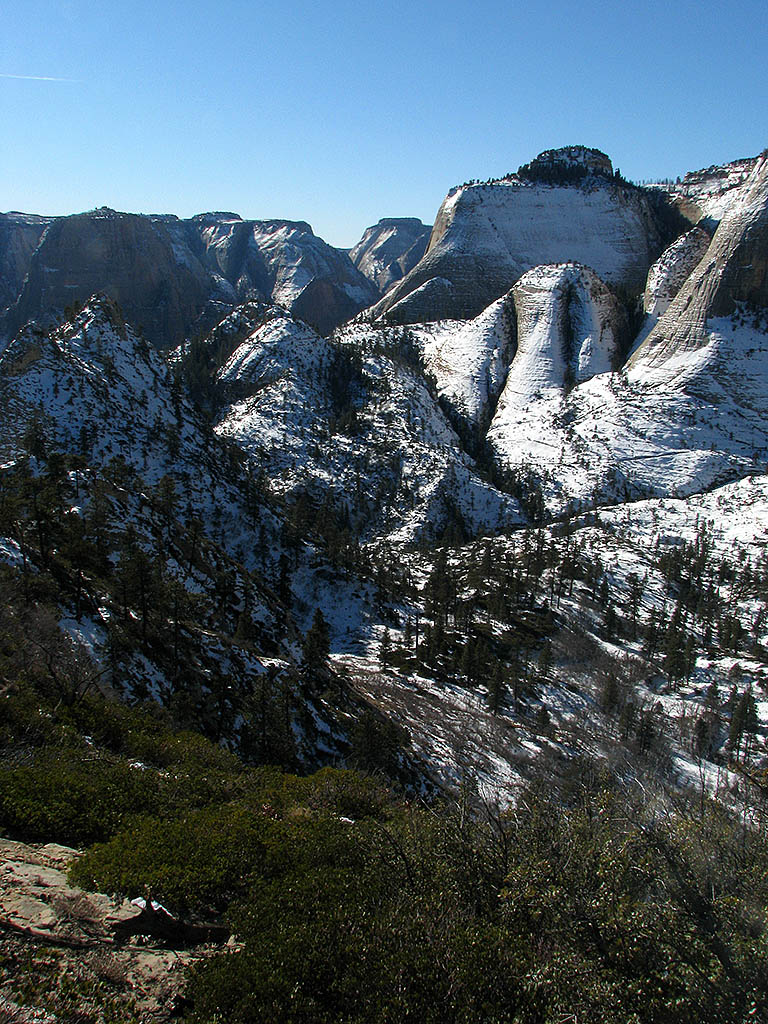 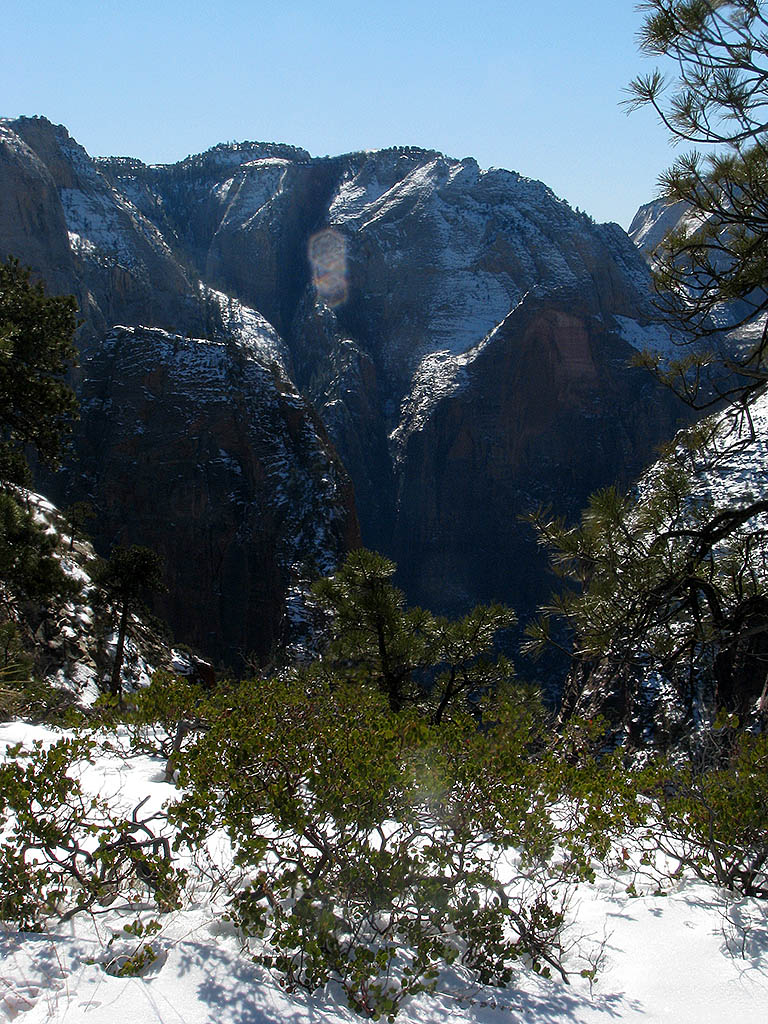 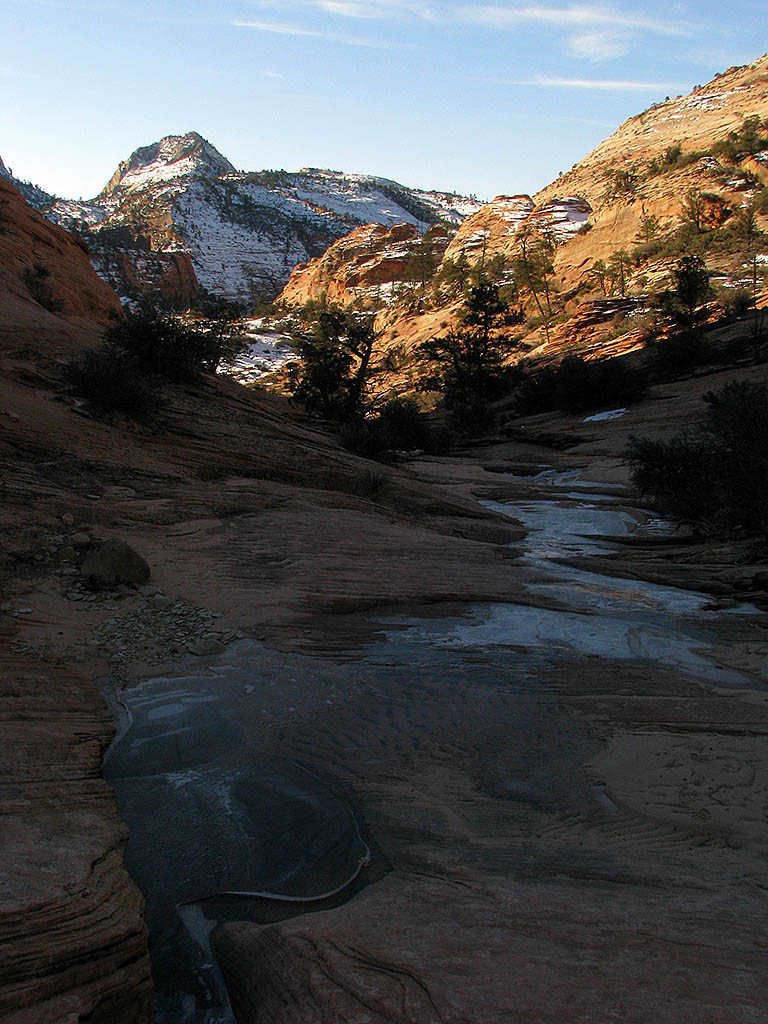 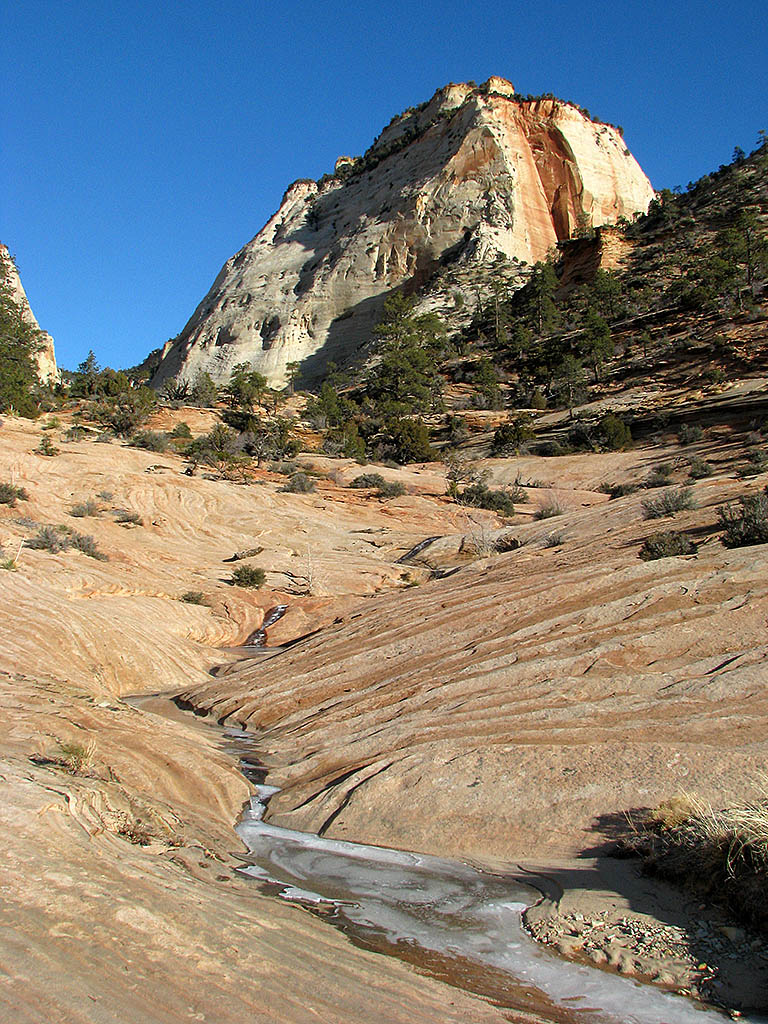 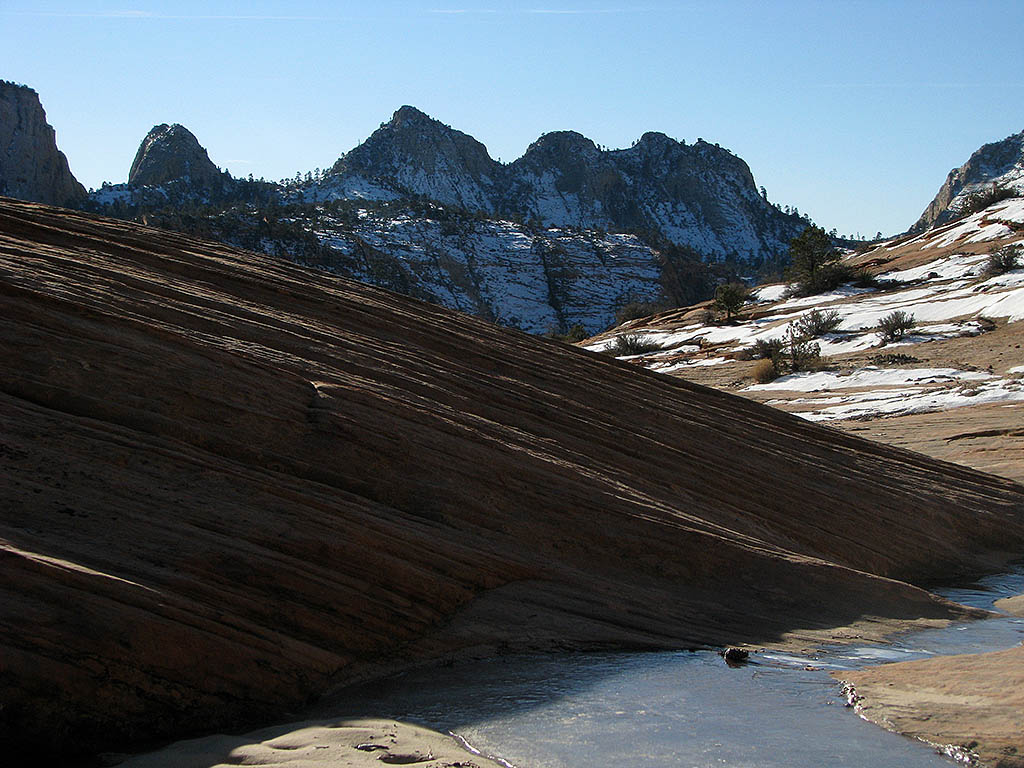 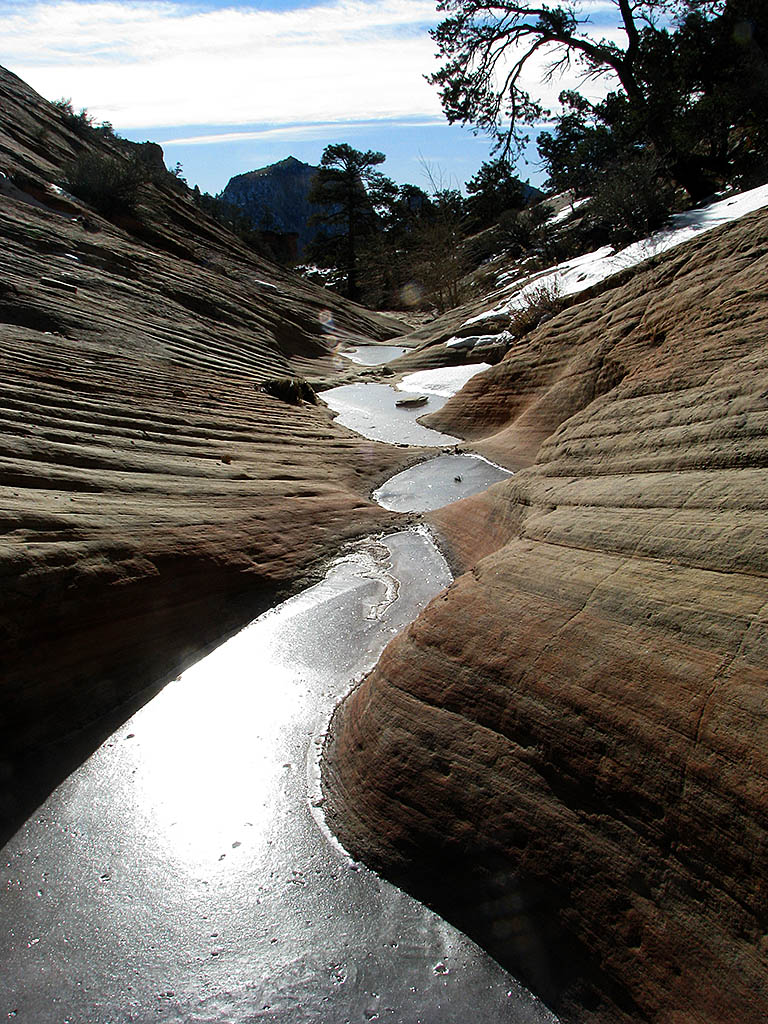 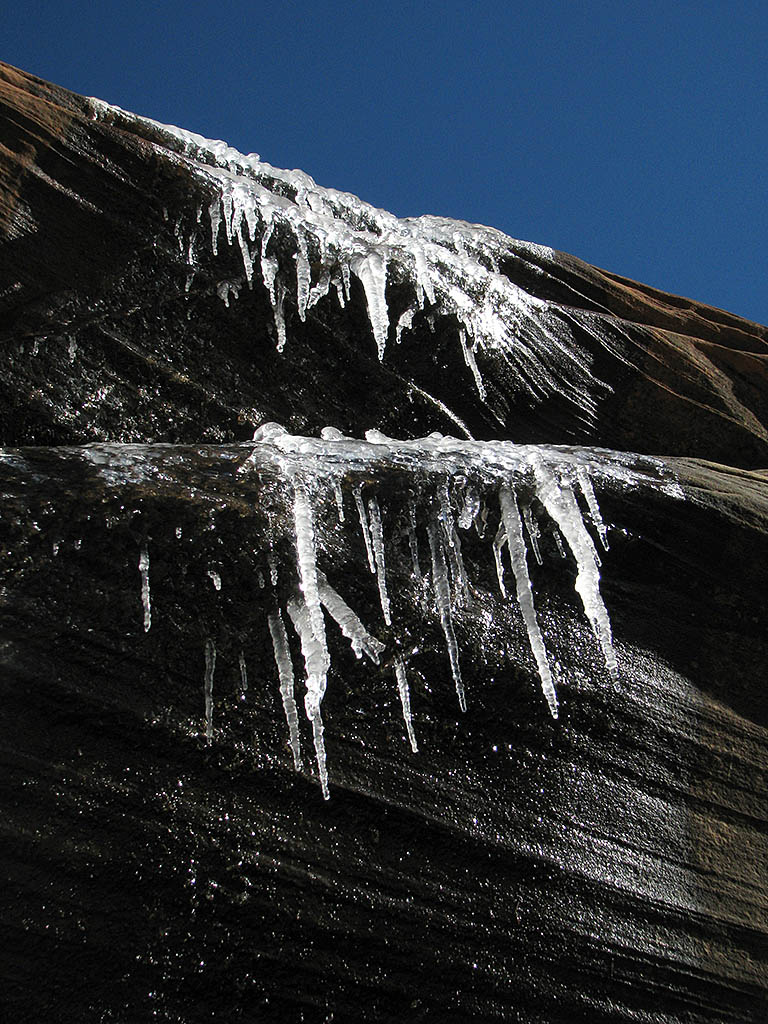 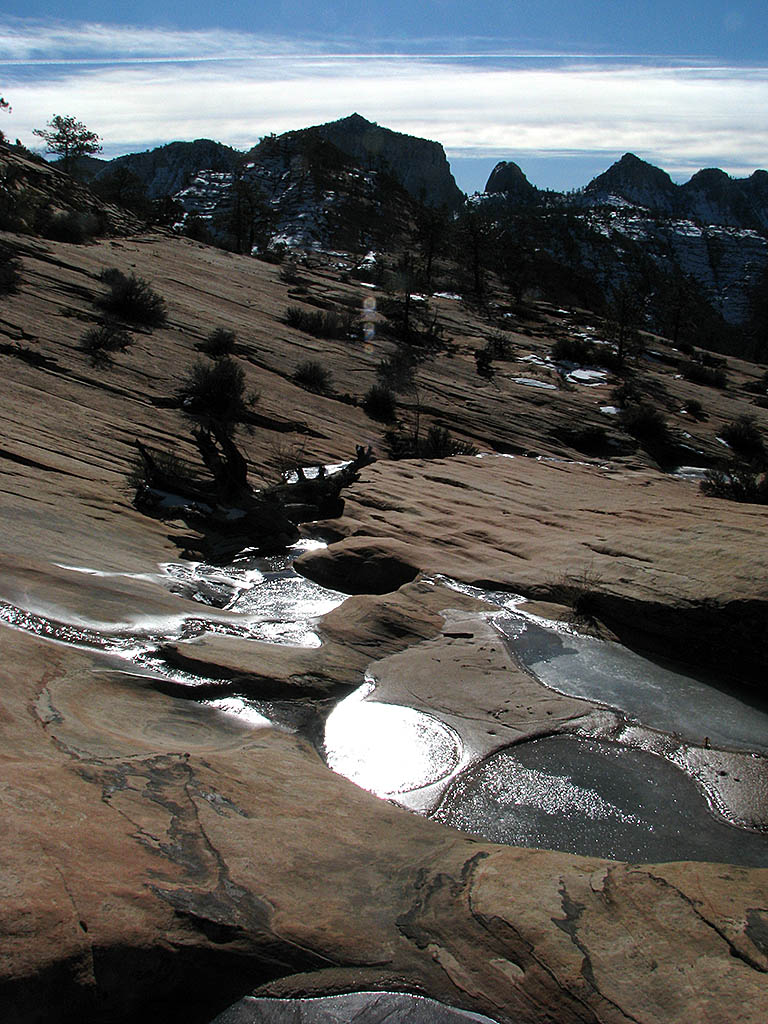 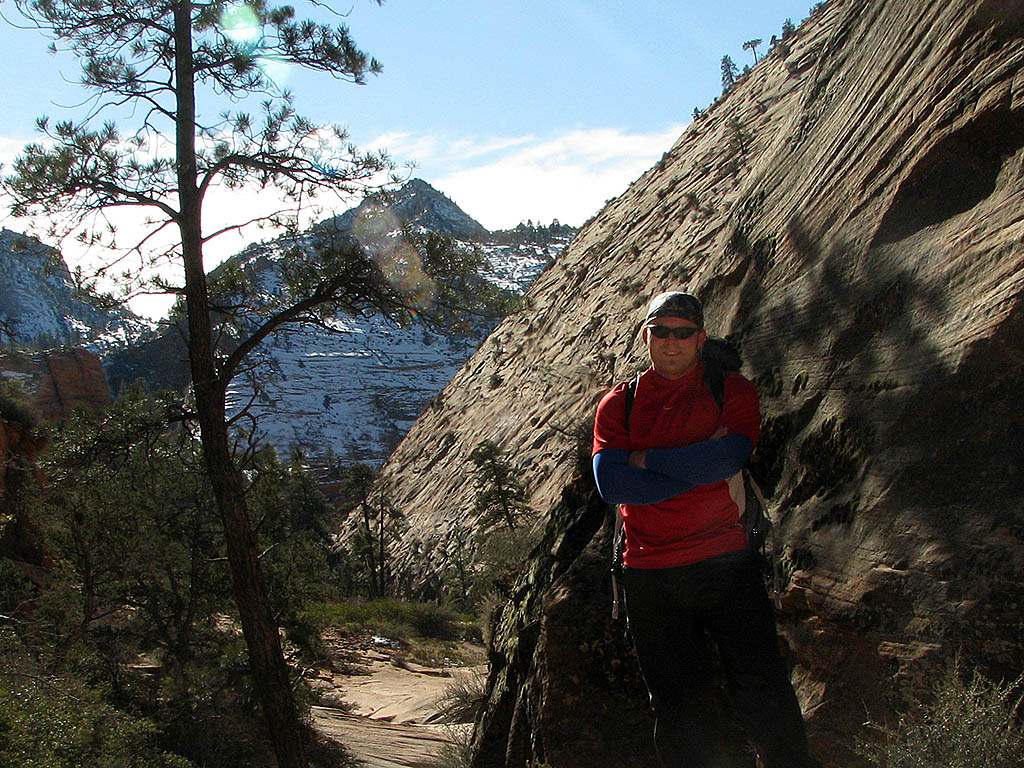 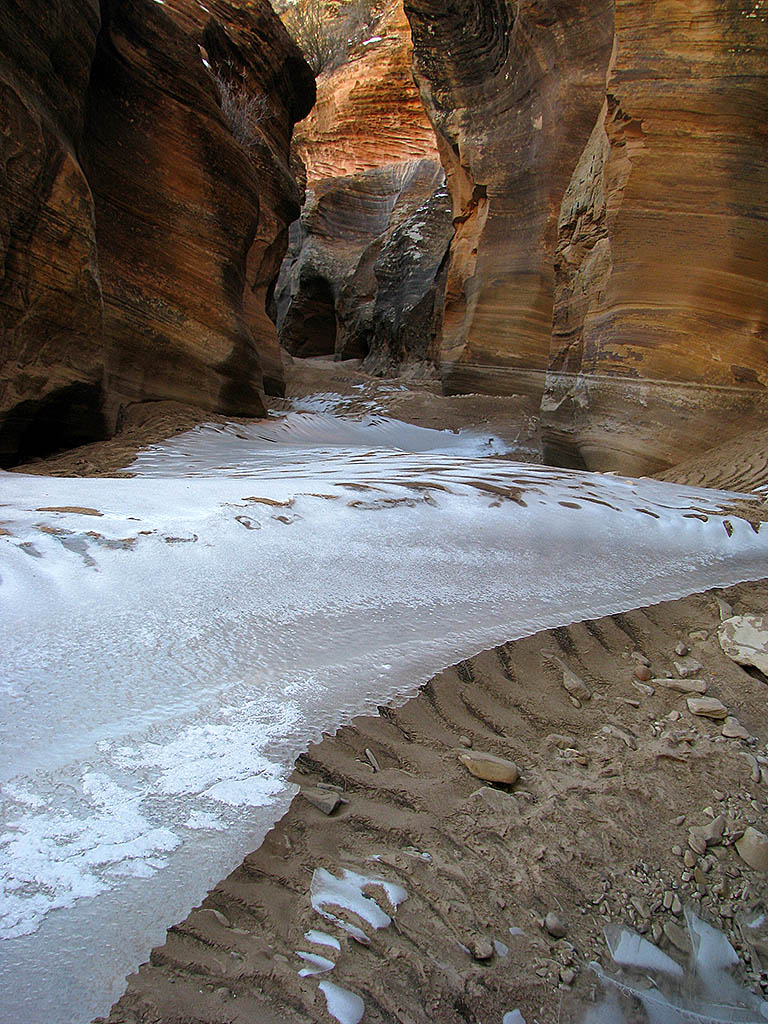 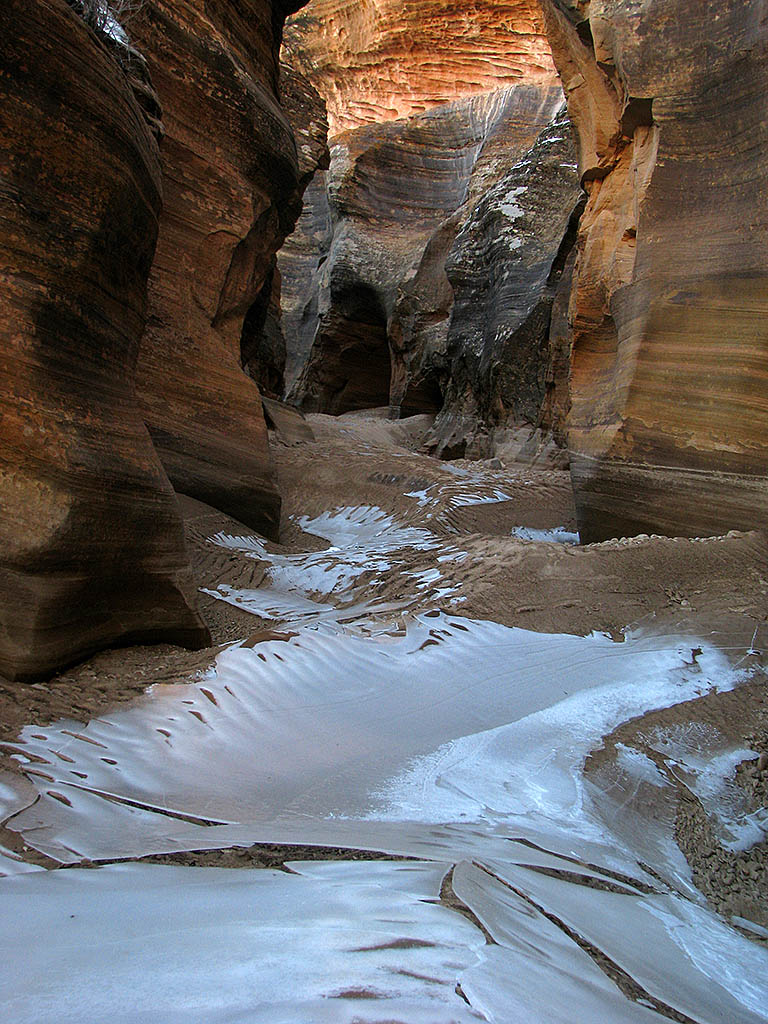 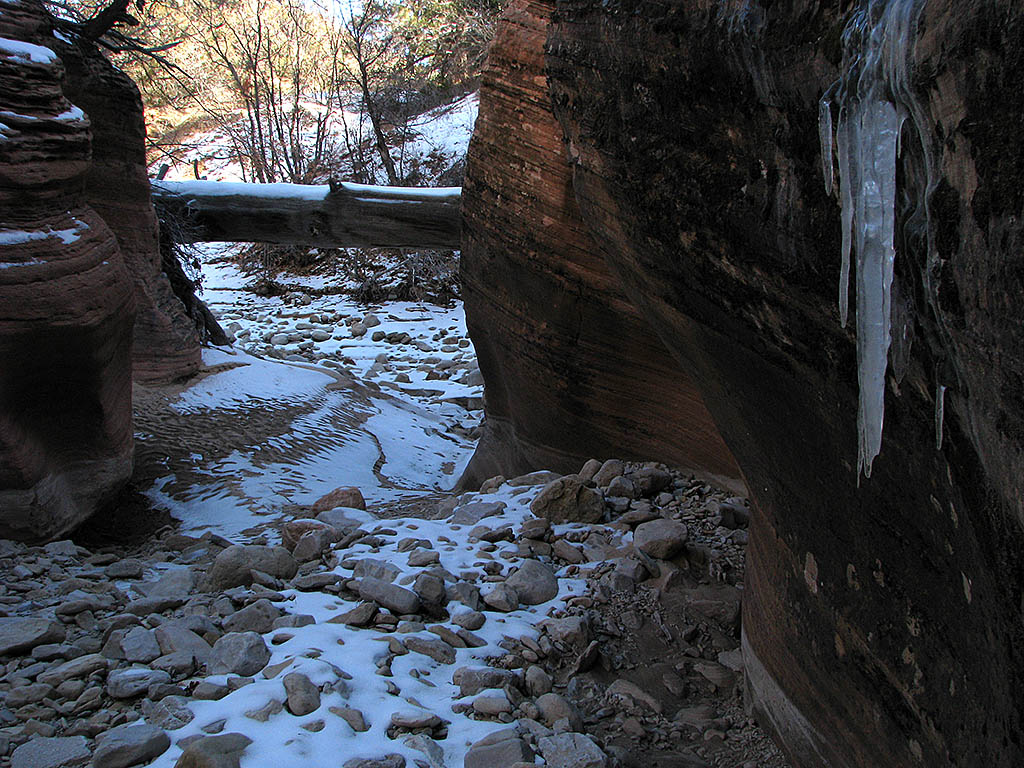 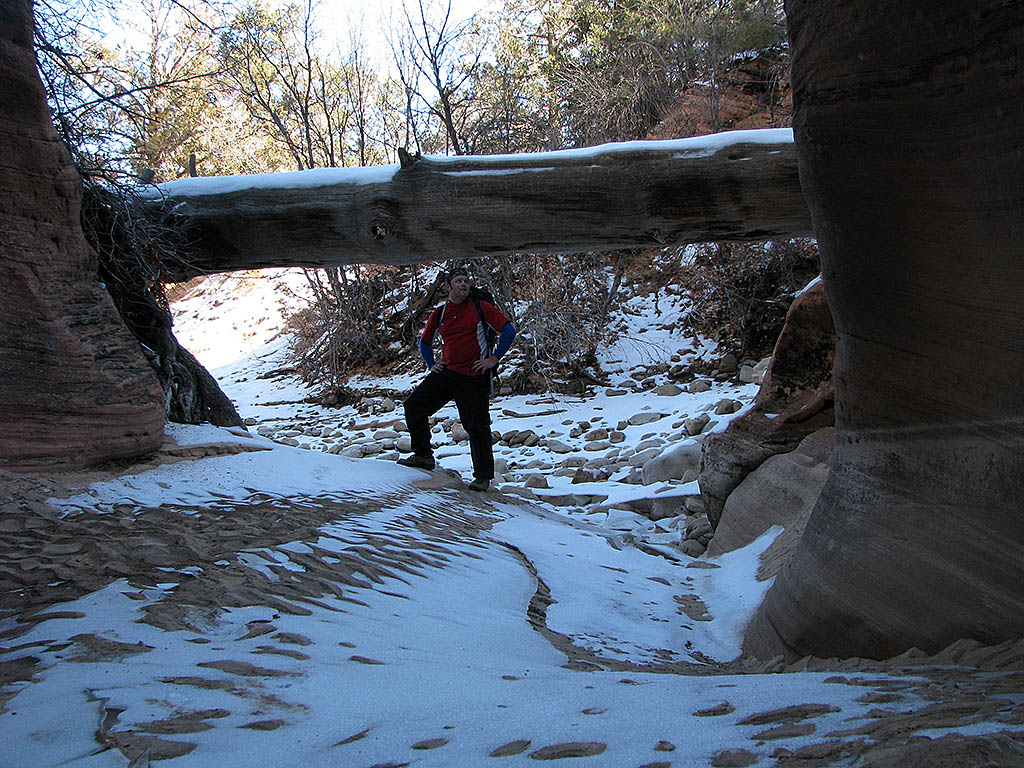 I was really looking forward to getting down to Southern Utah, just hoping beyond hope that it would be kinda warm, and that I wouldn’t have to see any snow until I got home. Looking at recent pics of Zion showing huge icicles, and snow galore didn’t phaze me. I honestly realized it was gonna be cold part of the time, but I just psyched myself out to feel better.

To help with the cold I picked up the Kelty Light Stalker 5Â° sleeping bag. It’s made exclusively for Sportsmans Warehouse. It’s got a mummy hood, but rectangular bottom. You can unzip it all the way to make a blanket if it’s warm. The one I bought was 650 down. That bag has some crazy loft. There are hardly any draft tubes for the zipper, just an inch wide flap that covers it up, but I didn’t notice any exceptional problems with this. The advertised length is 80″ they don’t translate that into height tho. The regular size is sized for someone under 6′, and the long adds the standard 6″. The temps dropped to around 20Â° the first night. I had my light thermals, and a fleece jacket on. I ditched the jacket cause I was too hot in the bag. The bag was awesome, but my Big Agnes pad couldn’t provide enough insulation against the cold – it wasn’t bad, but it was enough to keep me awake. I’ve slept on it in colder conditions but it was in a synthetic fill bag which keeps more insulation on the bottom when it’s compressed than down. So around 4am I crawled into my truck cab and shivered for 10 min till I was warm again. Just when I started to get some real sleep, the alarm went off.

The meeting time for Saturday morning was 7am. Uggghhhh. It was still dark, and Springdale was still asleep, so no real breakfast, just protein shake. It started to lighten up a bit when we started across the bridge at the trailhead. When we were approaching Walters Wiggles we heard a horrible scream…not something you want to hear when the conditions are cold & icy, and the route to Angel’s Landing is straight above you. I was thinking, who would be up here this early? Seriously? I didn’t even know what I was doing out that early. We met the screamer and the rest of her group a few minutes later sliding down Walter’s Wiggles cause that whole section was iced over.

The route to Angel’s Landing looked very forboding with the ice and snow covering the whole stretch. I didn’t think anyone would dare try it without gear, but sure enough they started to later in the day. Word was that it wasn’t all that bad to get to the top, but getting back down was another story. I just think ice + cliff = bad time. I’m just thinking they’d better hold onto that chain really tight, and their hands better not get cold, and if they do, I sure hope their gloves have really good grip. Well, no one is dead yet, afaik.

Back to the trip tho. We continued up the West Rim Trail into the area behind Majestic Mountain. We crossed the bridge and dropped down into a creek then up the other side, and made our way up to the start of our ascent. Keep in mind we’d been on snow or ice since Walter’s Wiggles. The ascent wasn’t too bad. We had to look for a decent route in a few places, but nothing bad. Just when we thought we were going to hit the top it turns out there was a big gap between where we were and the real summit. I was happy with where I’d made it. I’d seen some of the terrain I wanted to check out, plus I was tired of snow, and my asthma was acting up despite the meds, which isn’t good, plus everything else. I was just done. On the way back I heard a huge crashing sound, and turned to look in the direction it came from, a second later I saw a 70′ sheet of ice break off of the waterfall formed from Cabin Spring. It broke into smaller sections on the way down. When it hit the bottom the crashing sound echoed back and forth in that valley. It was really cool to watch. The next morning I found out the other guys made it to the top, but it took a while to get up & back out – like it was getting dark – so I’m glad I did what I did.

The plans for the next day fell apart, so I went solo and did some exploring in South facing canyons on the East side of Zion. I went up and did a hike called Many Pools, and indeed there were. I went up quite a ways until a slot canyon started up. I chimneyed 7′ up & over a chockstone, and headed up a little ways. It looked really cool, but I figured I could spend all day exploring further, and I wanted to start driving home around noon. Looking at the map there were two canyons side by side where I was. I thought I was in the one on the East cause the features on the East matched up, but the canyon on the West had features on the West side matching up. It wasn’t until I was halfway back that I realized there could be a whole other canyon to the West of me – it looked like the canyon wall I was in continued straight up, but it was possible it didn’t. I climbed away from the canyon bottom maybe 100 vertical feet and sure enough there was another canyon down there, and it was deep! I followed close to the ridge between the two looking for a route down, but didn’t find one until I was fairly close to the highway. Once at the bottom, there was a little used trail bypassing short stretches of impassable slot. I turned back when faced with a tight 25′ scramble. I need to read up on which canyon that is, and what’s up there. When I got back to the highway, I didn’t know I was at the highway cause I was 25′ below it. There was a steep embankment and a dark hole, which turned out to be a drainage tunnel carved out of rock the highway goes over. Through there and to the East and there was a short section of slot canyon. I went upstream a ways, and decided I needed to climb out and start looking for my truck. Conveniently enough it was right there when I got to the top.

So now I realize the vastness of opportunities to explore the terrain there, and I don’t know where to start….or when I’ll have the time to drive down there enough to even make a dent, but I gotta start.