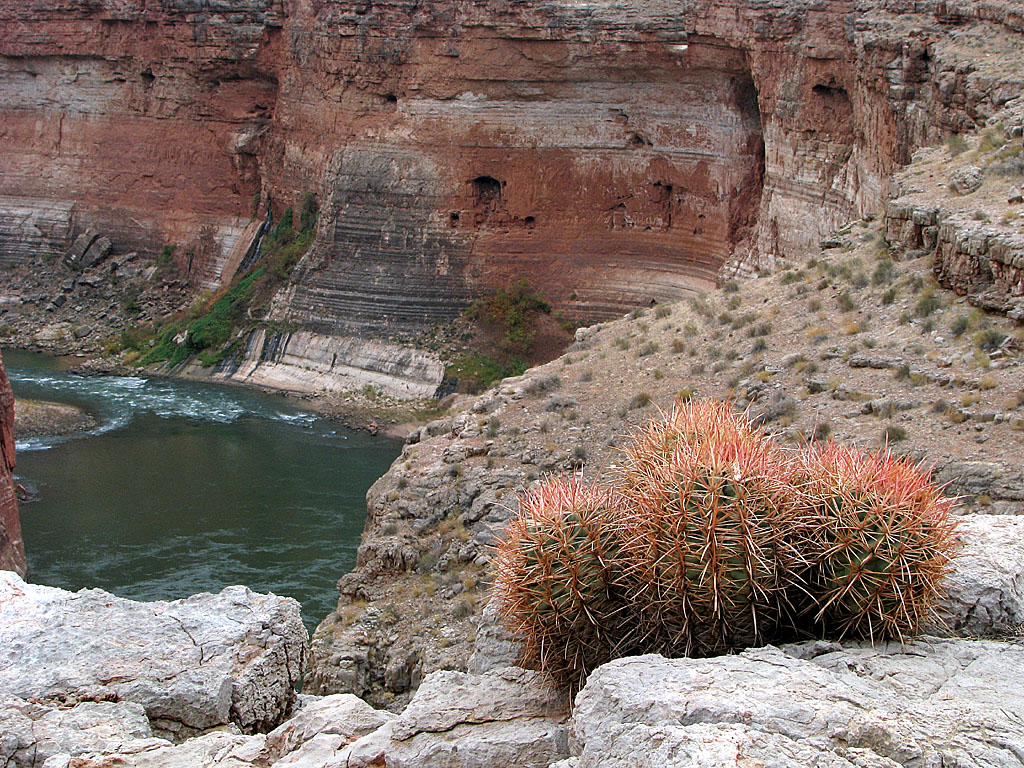 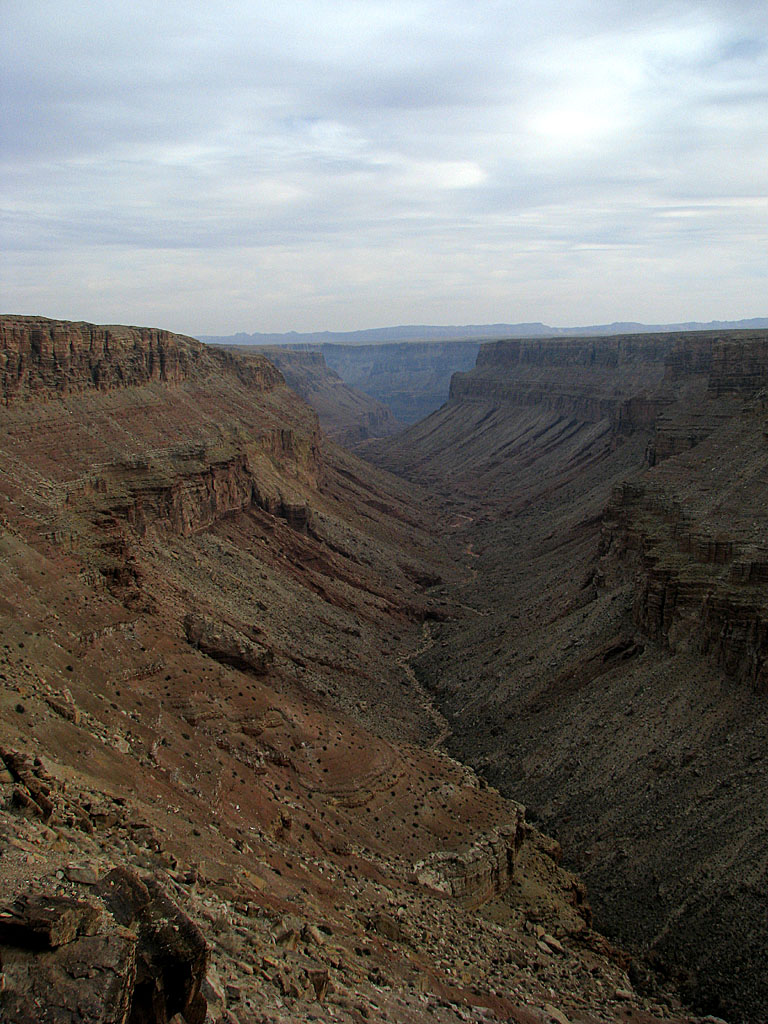 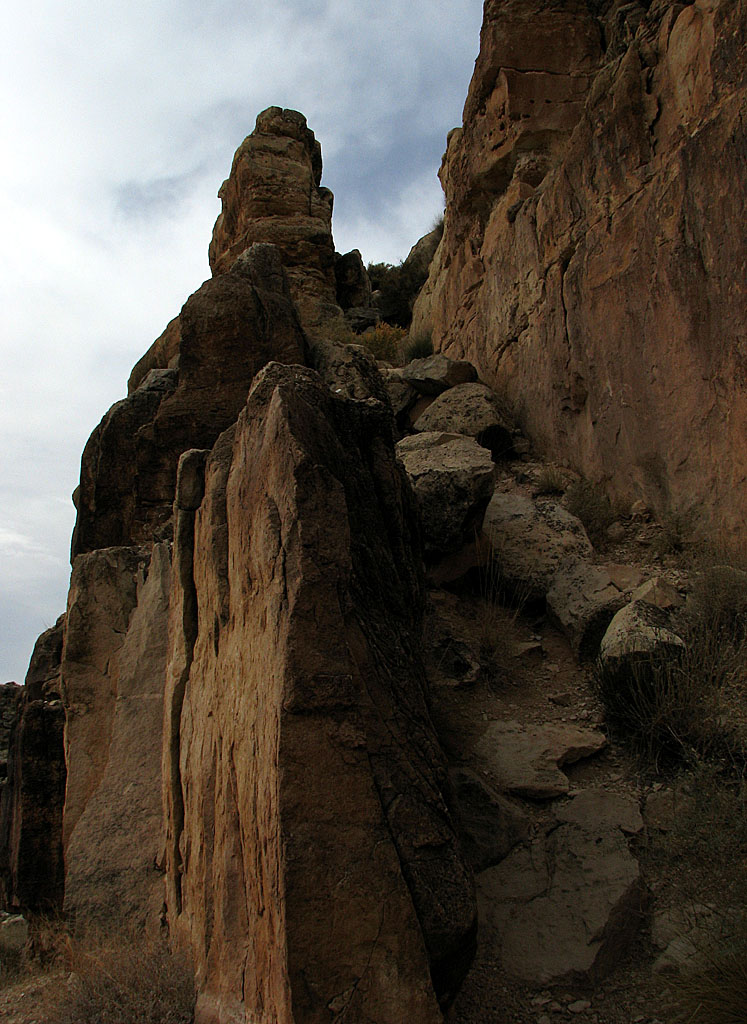 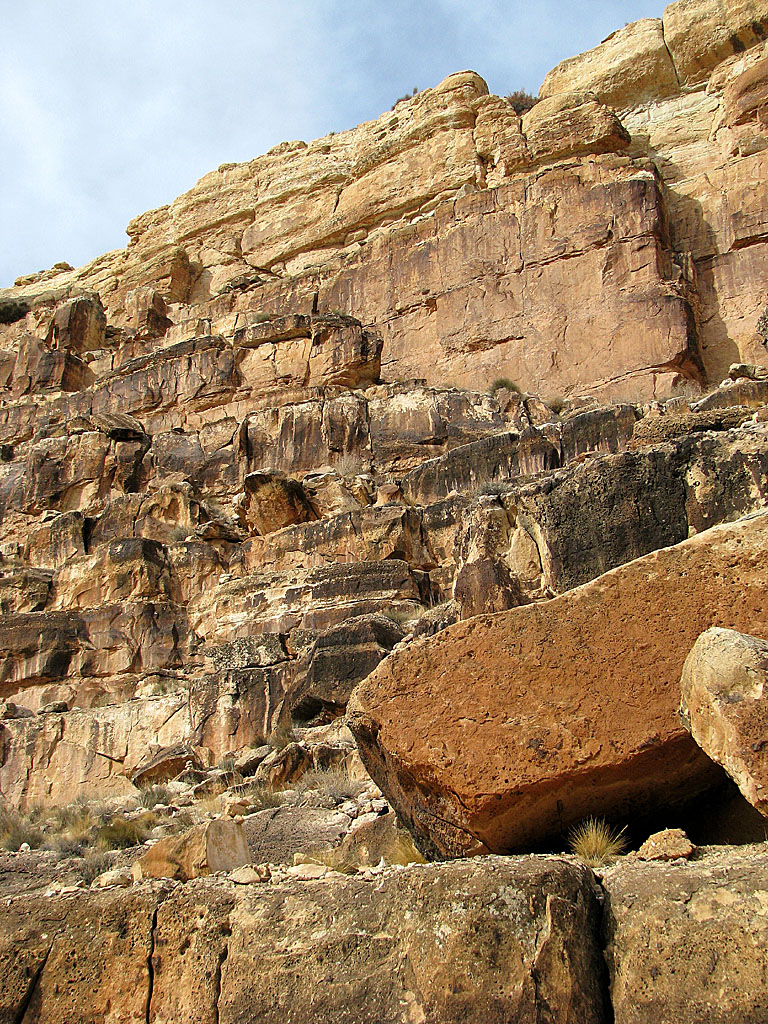 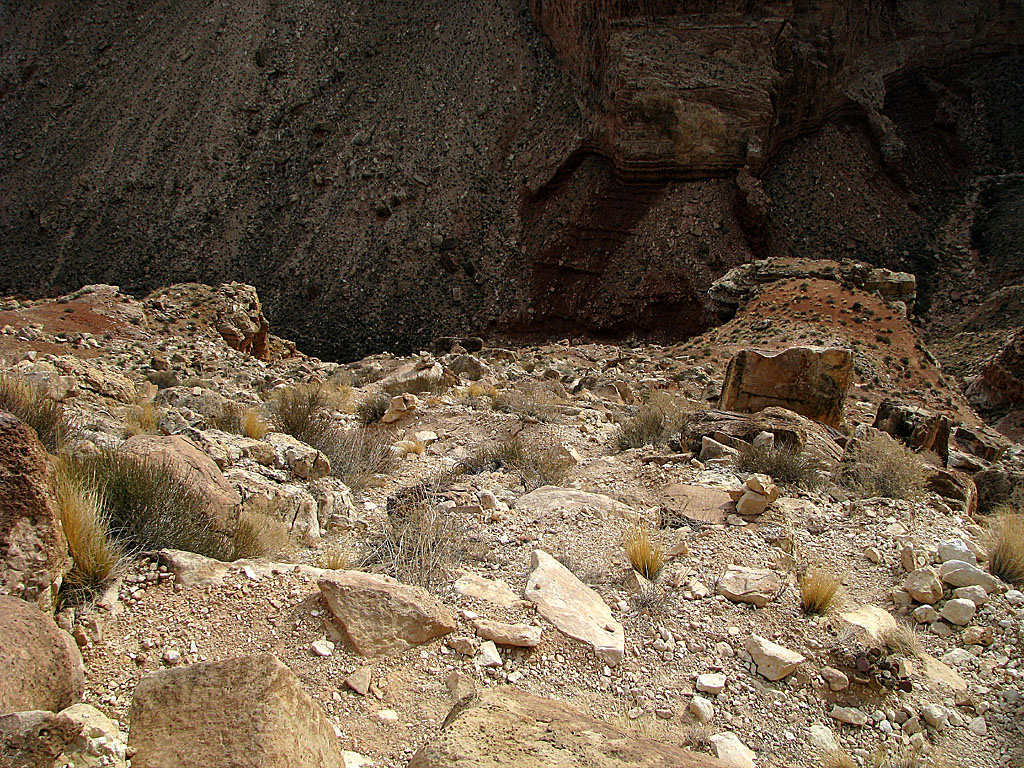 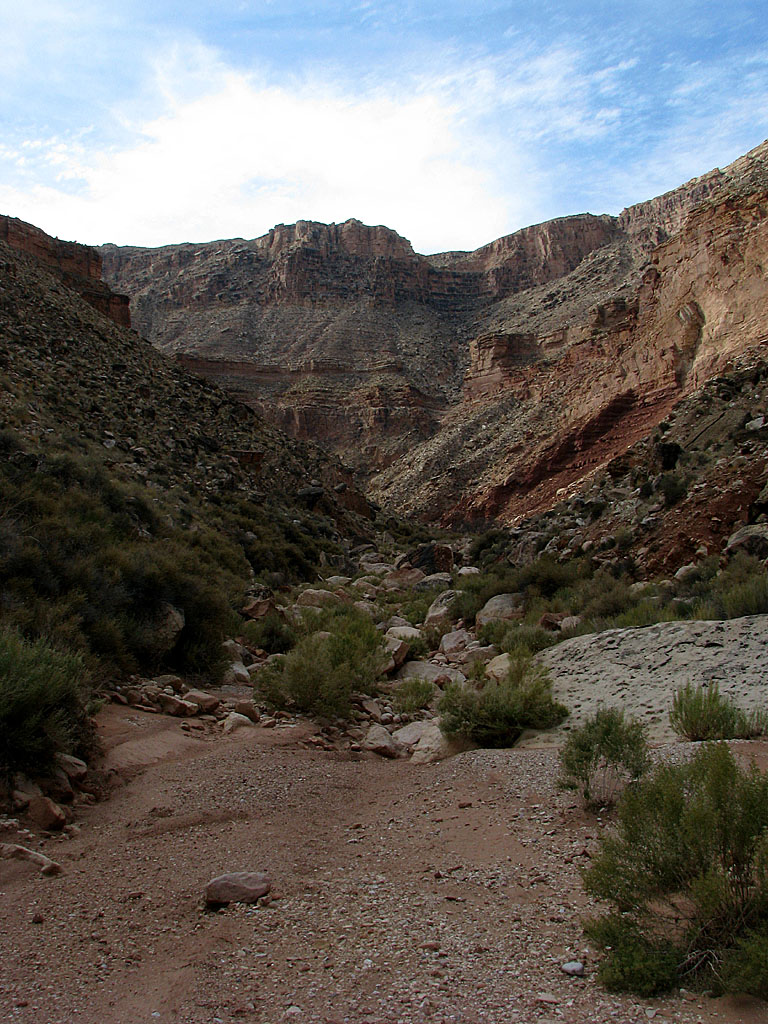 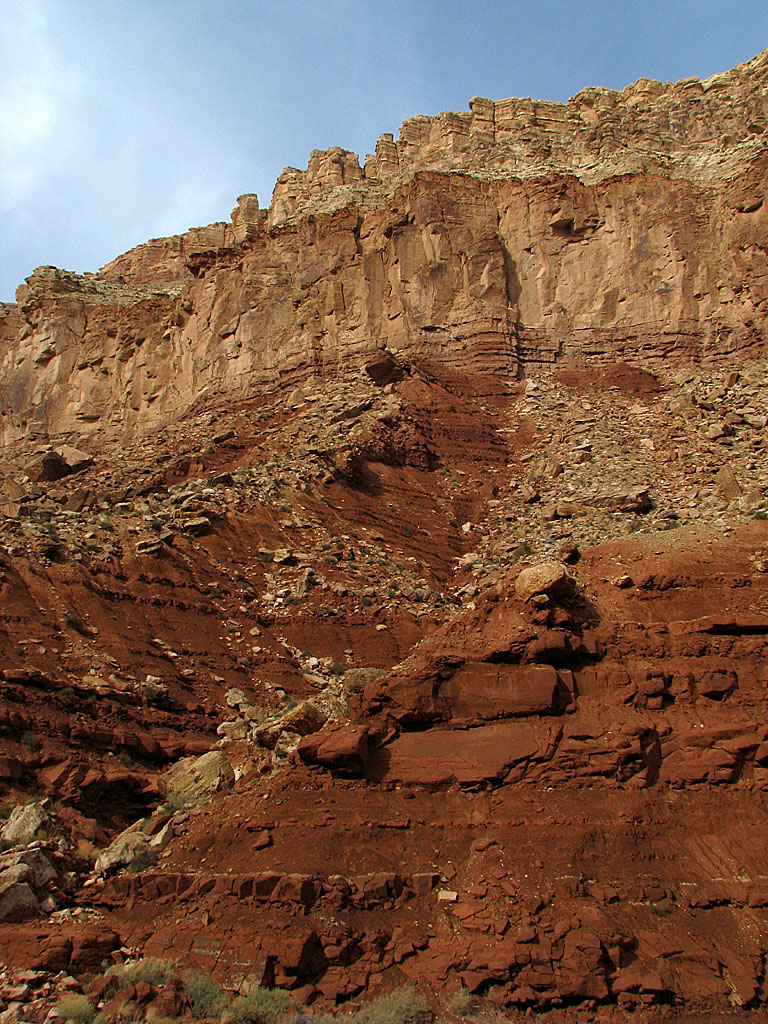 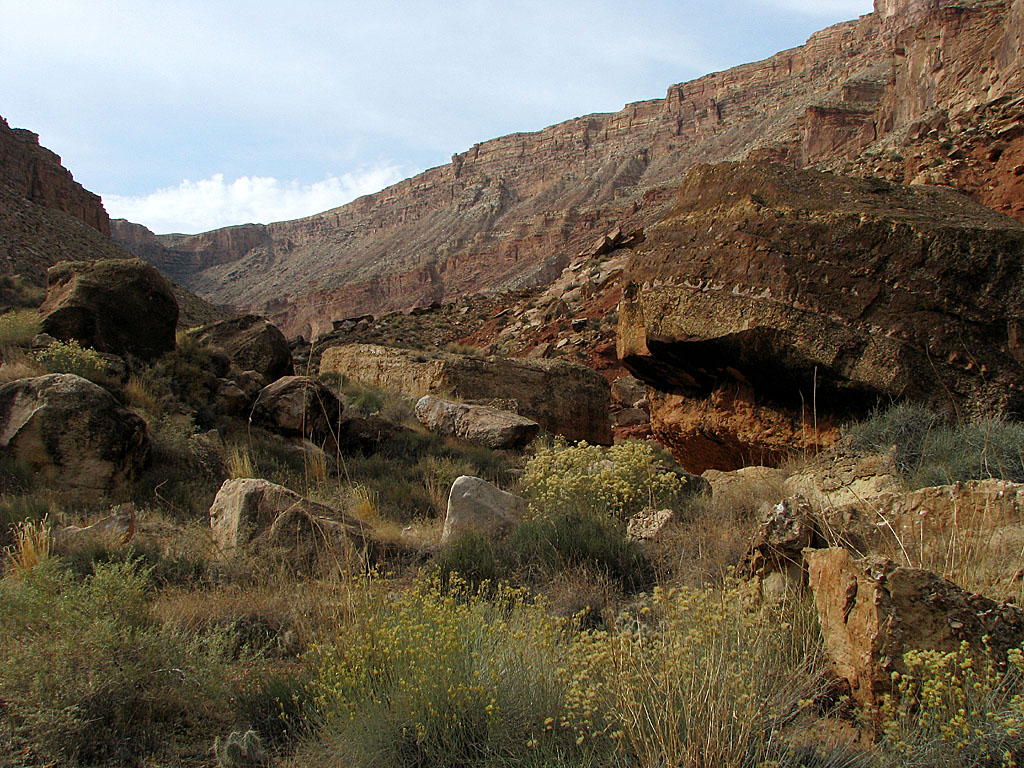 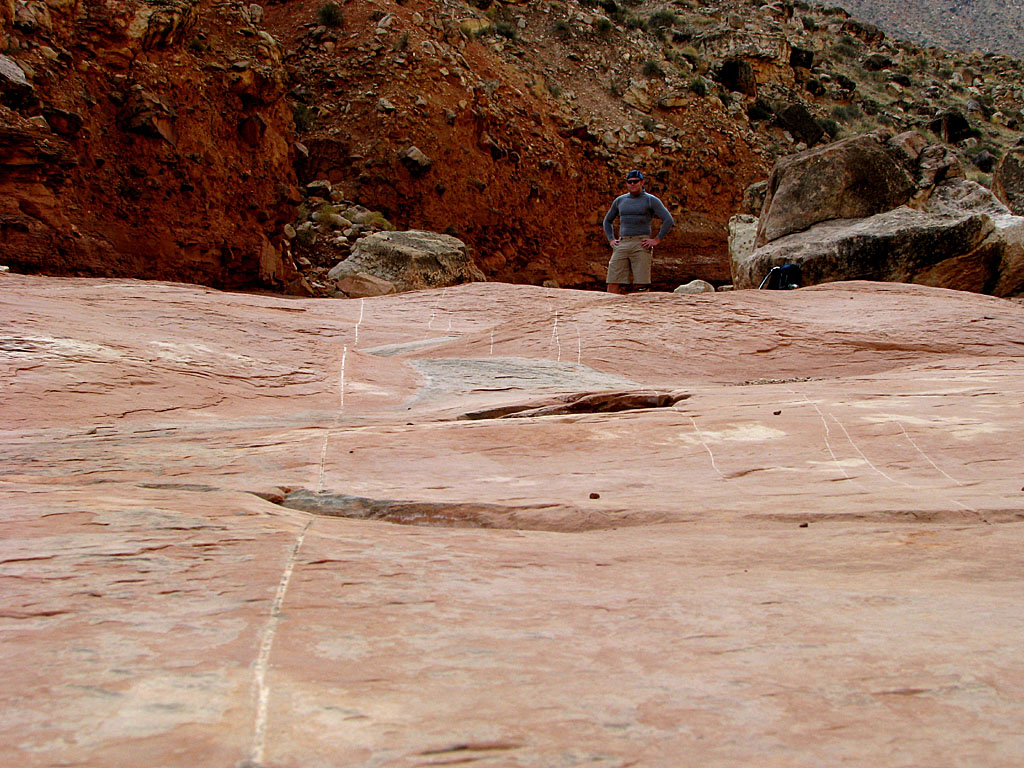 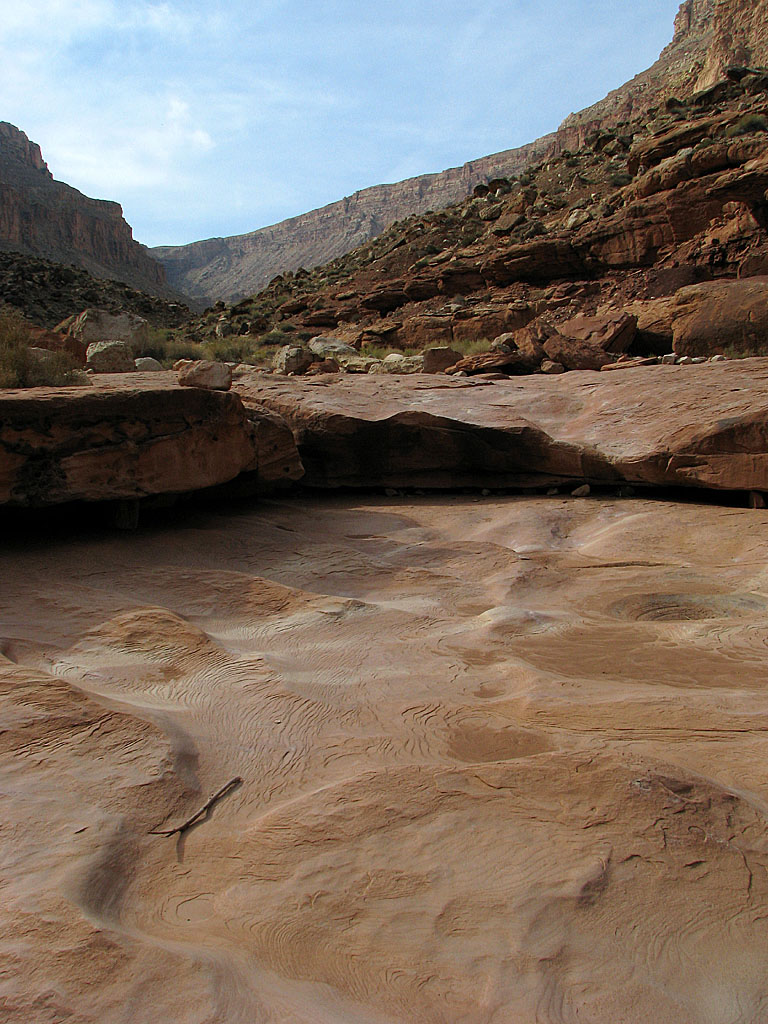 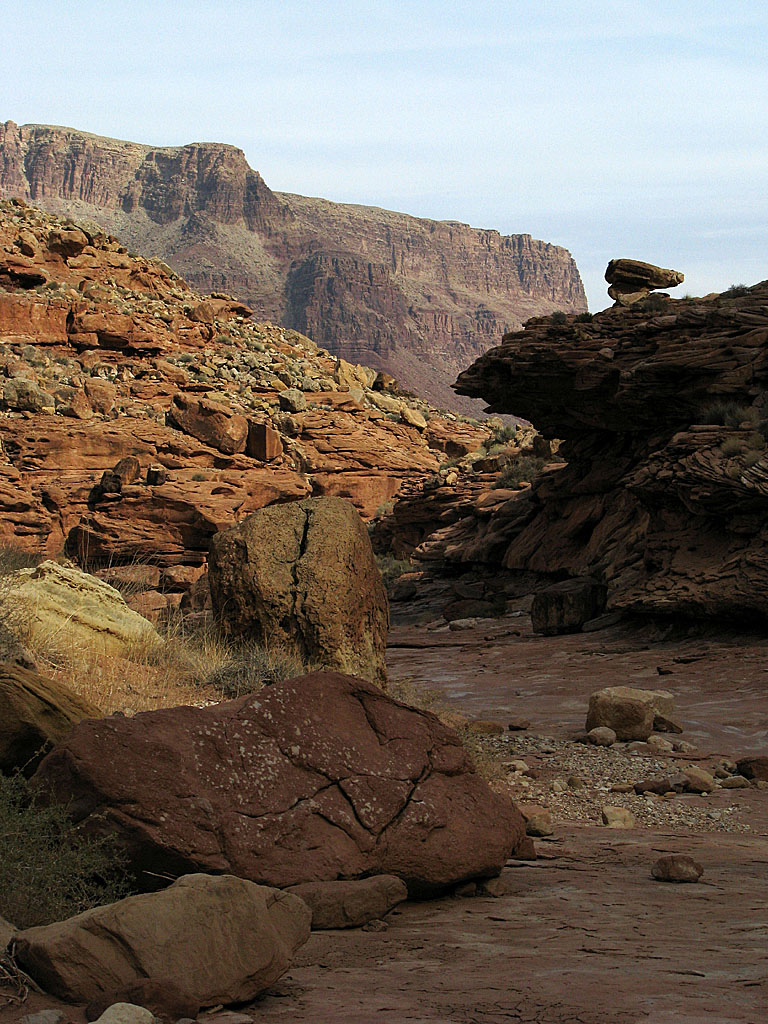 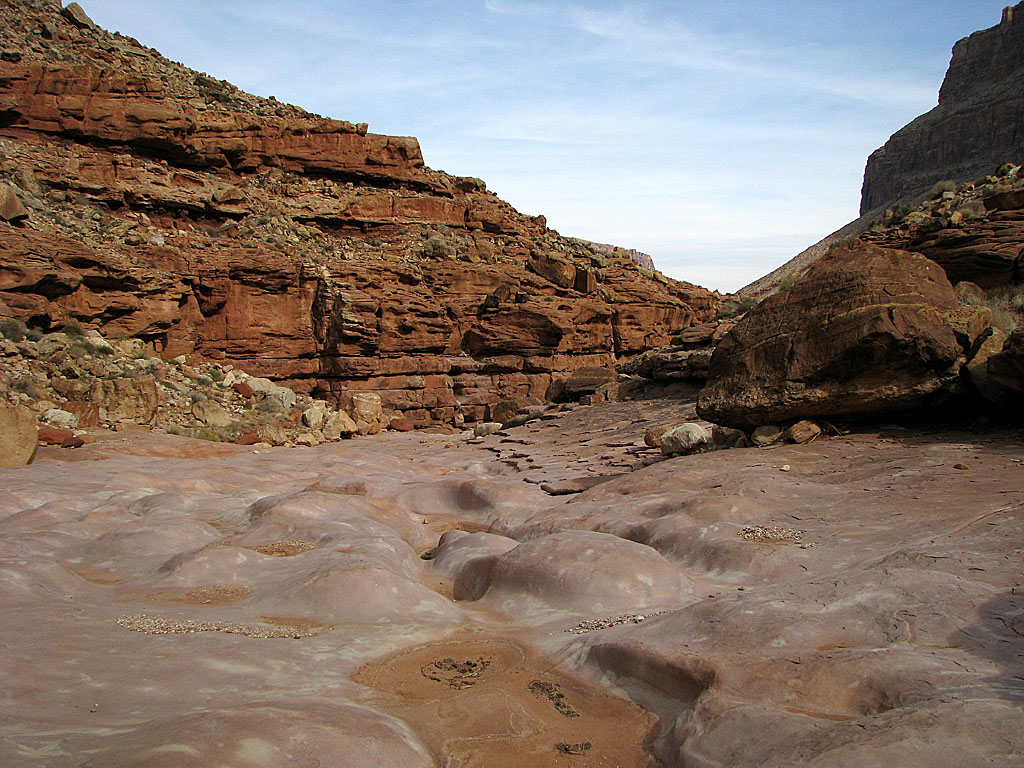 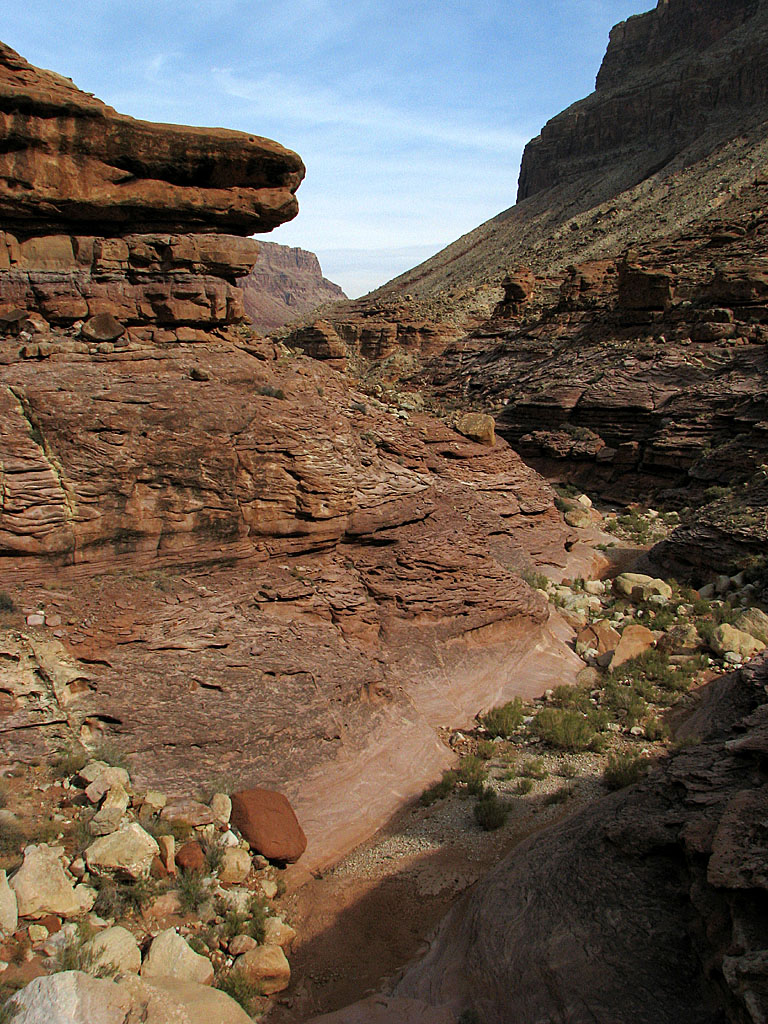 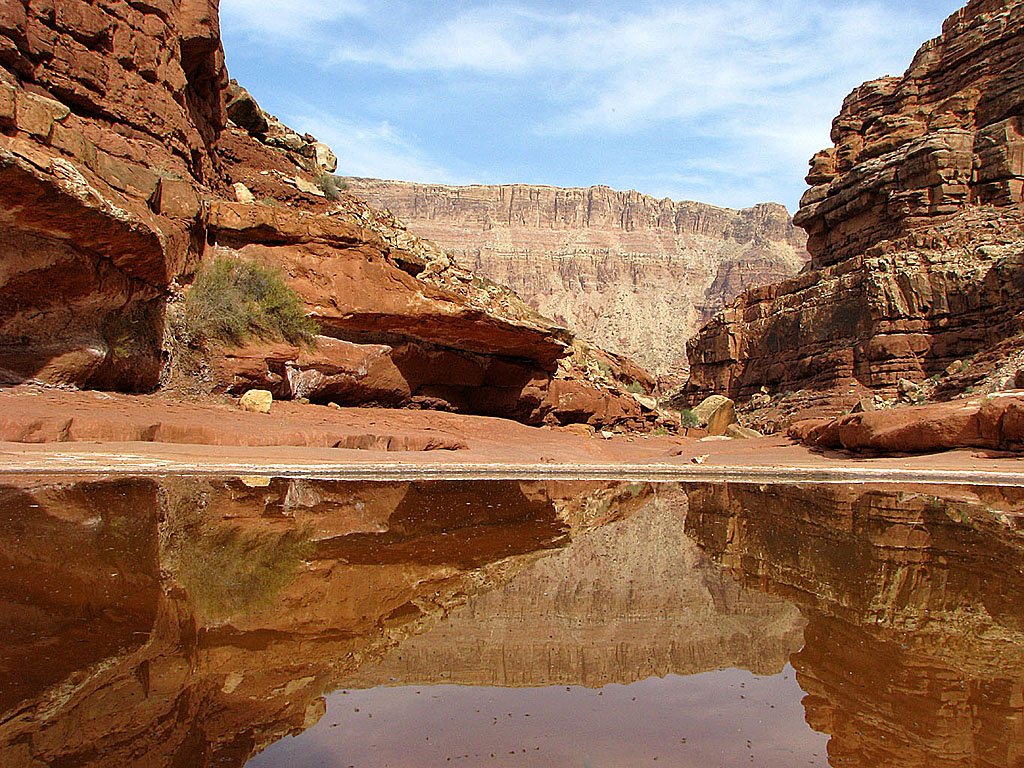 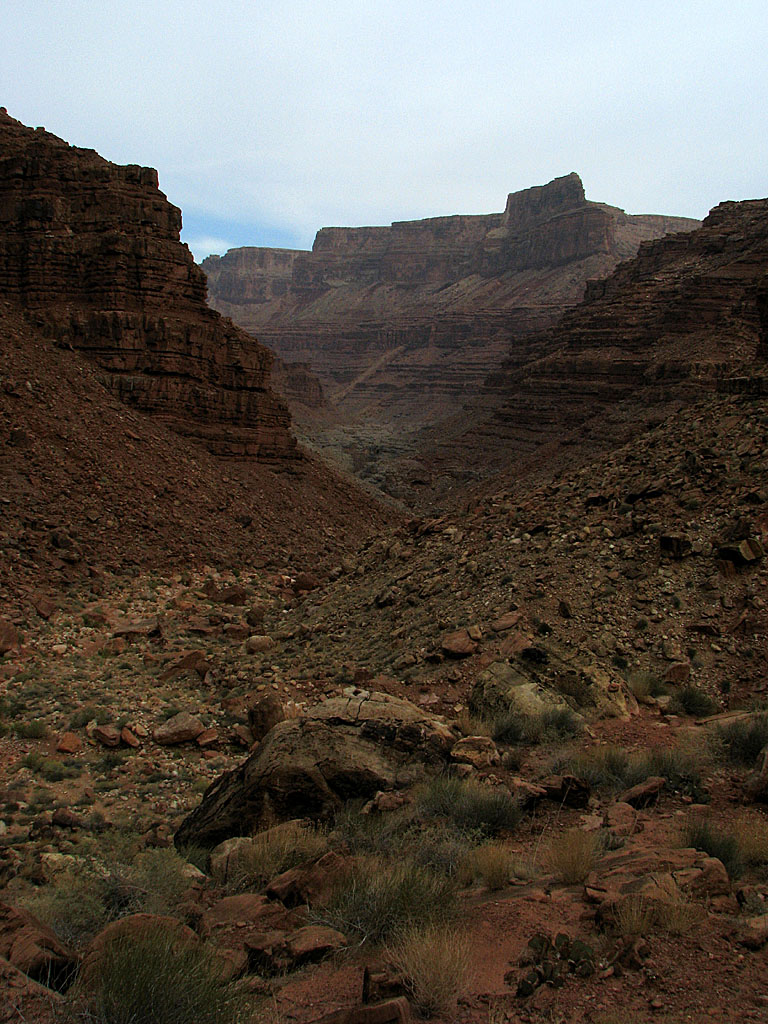 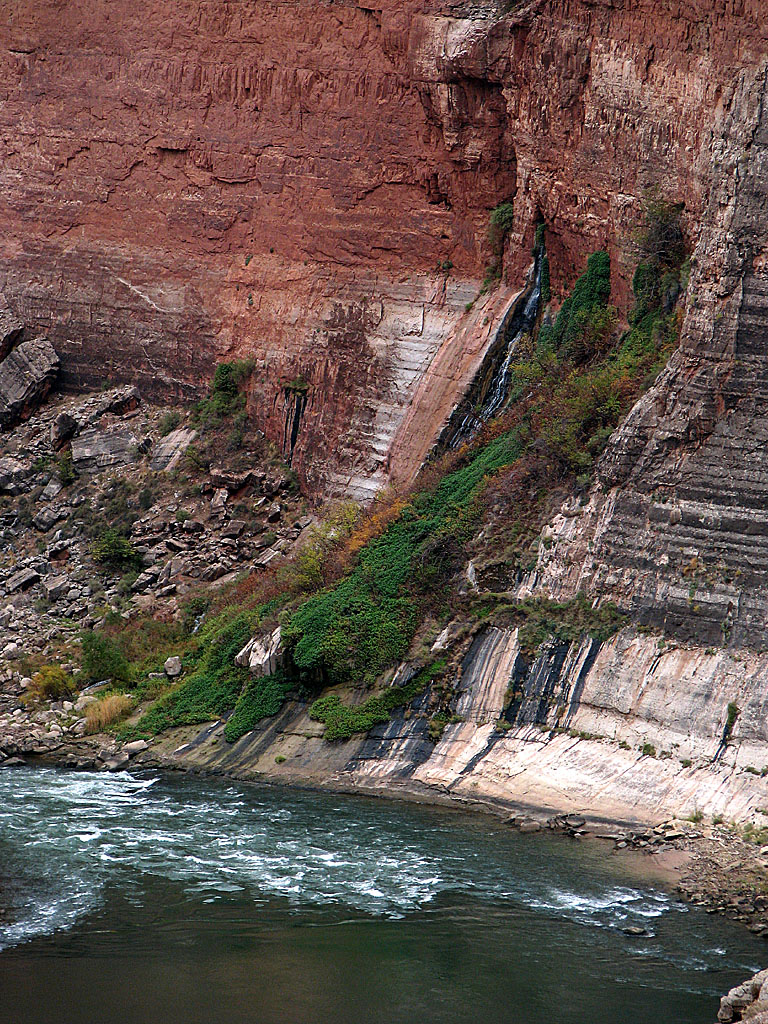 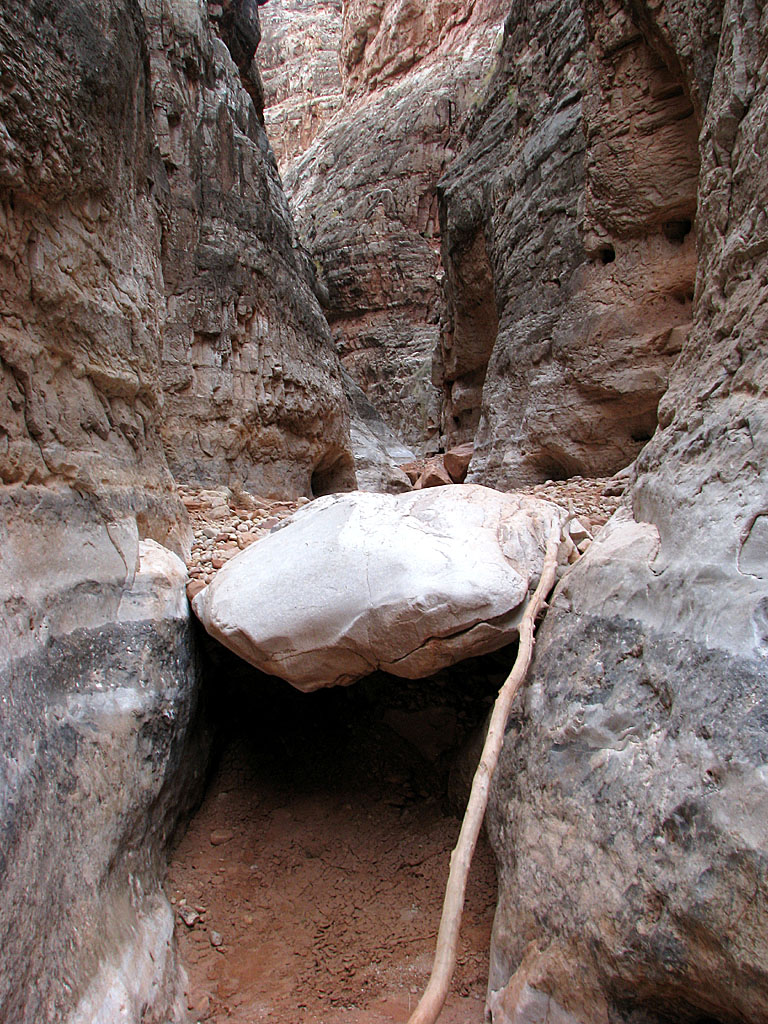 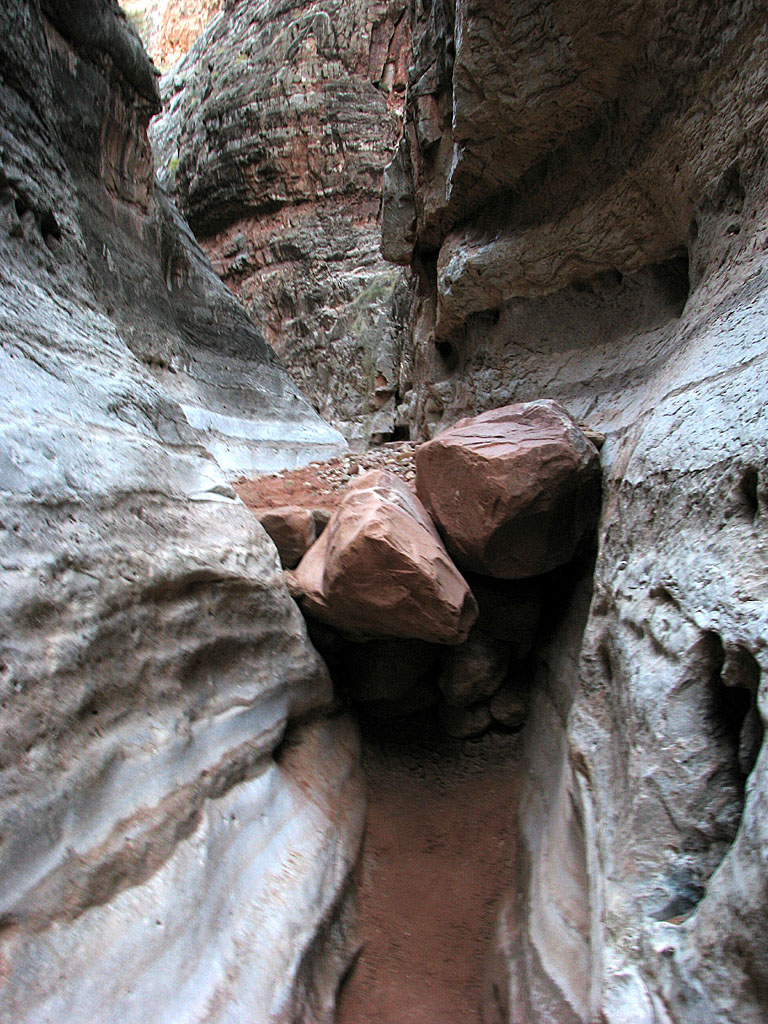 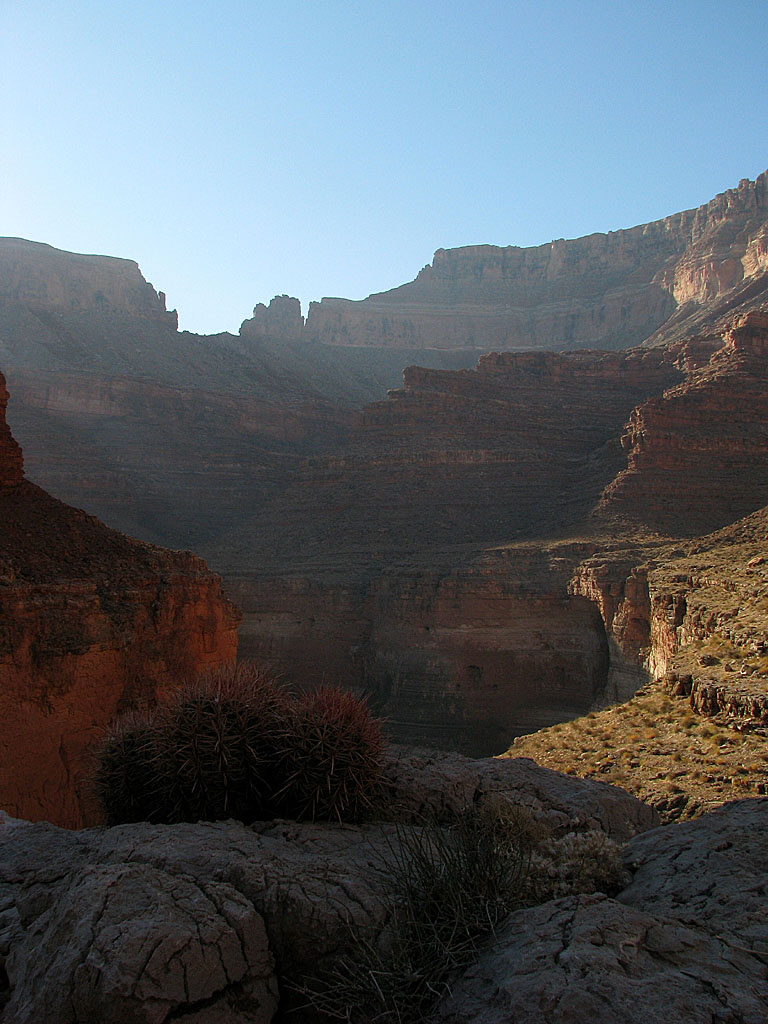 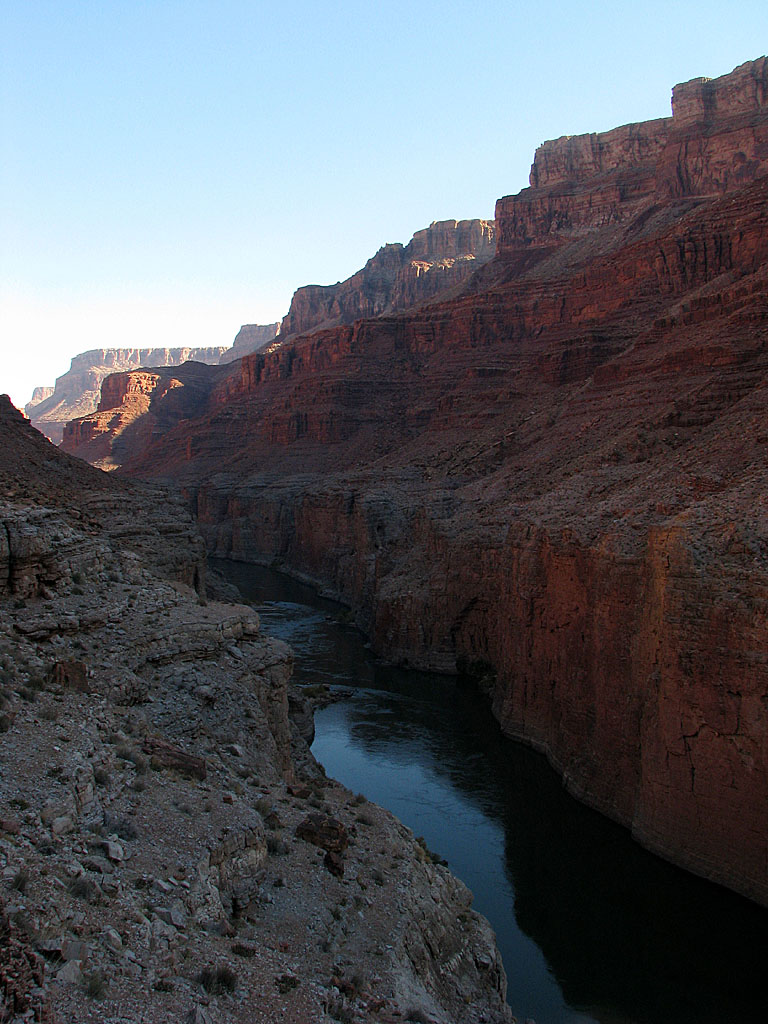 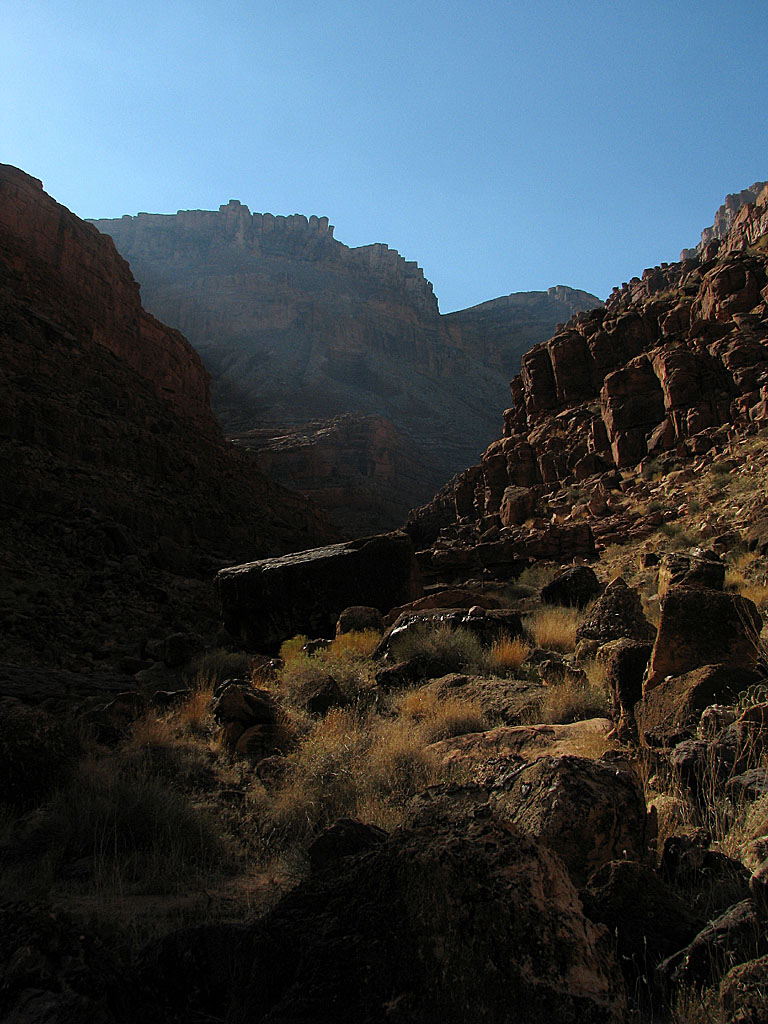 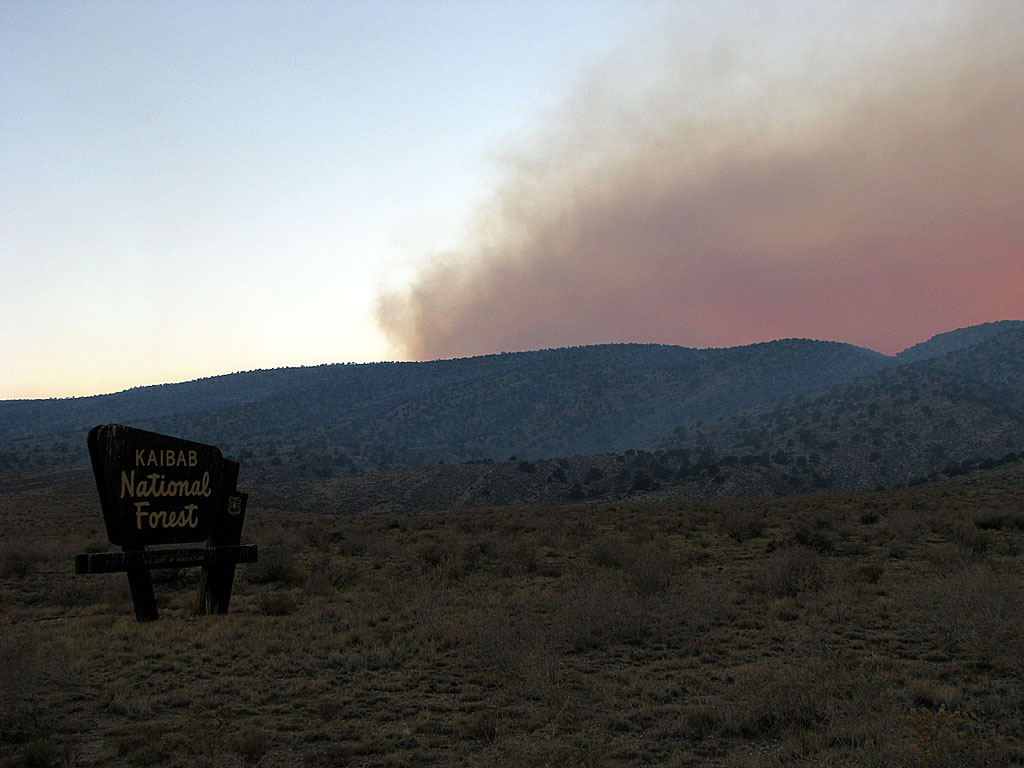 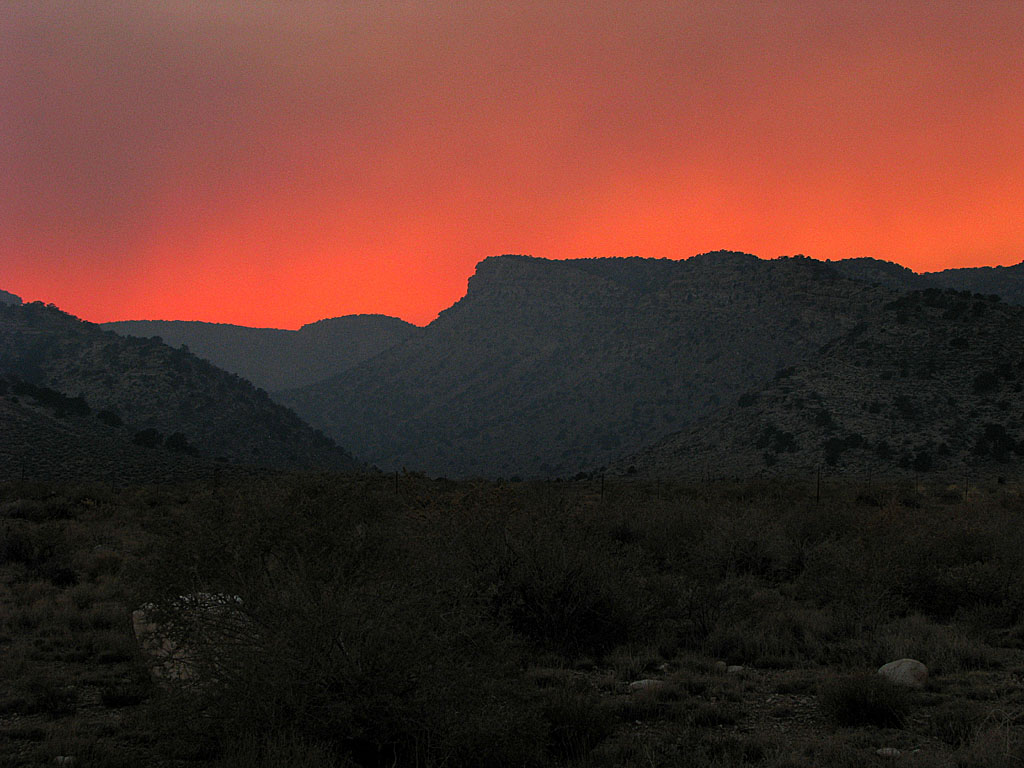 This trip concludes the Fall trip series. It was fun. Especially the two weeks I didn’t go on trips so I could catch up on everything I was missing all the other weekends. I’ll have to remember that for future trip sprees.

South Canyon is a fun, quick trip….kind of. It starts out by dropping down to the bottom of upper South Canyon which is no easy task. The route is pretty direct,after you make your way down the crack through the upper most layer of cliffs. The trail switchbacks tightly from there down several bands of rock layers, then several hundred feet of loose rock and that ends at the top of some cliffs with a nice flat area suitable for camping. Then it’s over to a gully where you drop down some trickly ledges, and make your way down to the base of a cliff, and switchback your way down to the bottom. Going down, it didn’t seem all that bad, going back up things seemed more technical – it’s usually the exact opposite.

The riverbed of South Canyon starts out with boulder hopping, then the slickrock begins which make things easy for a while. Boulder hopping is always intermittent though. After Bedrock Canyon hooks into South Canyon the boulder hopping gets a little more extreme. Then the terrain gets a bit hillier while taking the trail above the narrows (the narrows are impassable without a little technical gear – never read a trip report where someone went through them). The final drop to the Colorado River is slightly technical, but not bad.

Ten minutes after I got on the beach a small herd of rafters showed up on the river and one came up to see if they could crash with us. Rafters are usually good to backpackers because they usually show up after the backpackers make camp on a beach and kind of impose themselves because it’s either that or try finding a beach further downriver. We got a real dinner, complete with salad and a campfire. Nice.

I visited Stanton’s Cave and Vasey’s Paradise the next morning. It was alright, but just seems like another giant spring in the Grand Canyon. After that 30 minutes of fun, we decided to head out a day earlier, cause what else were we going to do?

Going back seemed much easier than going down. The slickrock sections seemed longer and more frequent which was great. There was the right amount of challenging sections to this trip, but not enough that they seemed never ending like some trips.

So after climbing out the sky to the North was filled with smoke. It later became apparent that the Kaibab National Forest was on fire again – probably a maintenance fire – a big one.

One thing to note on this trip – no ringtails, no chipmunks, no mice, no squirrels…..only ravens, and they were only interested in the rafts. Did someone/thing kill them off?