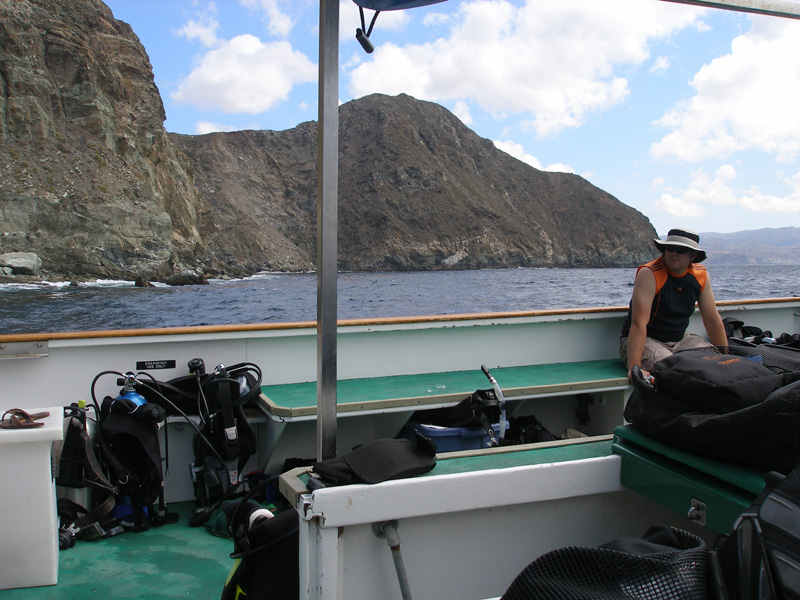 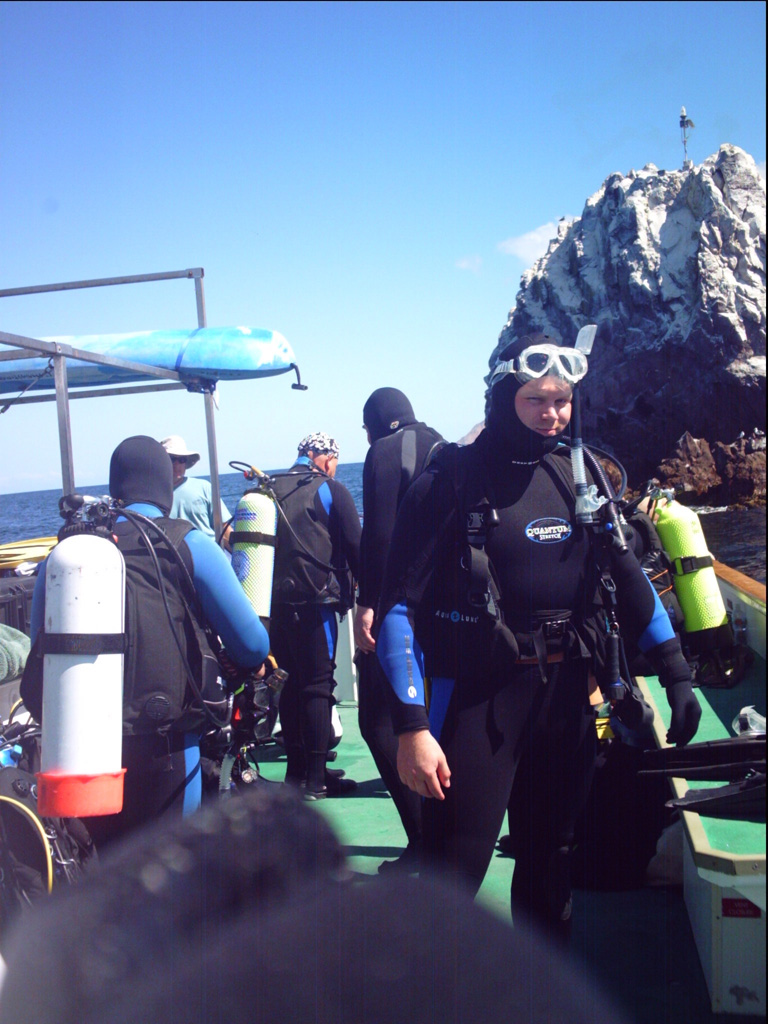 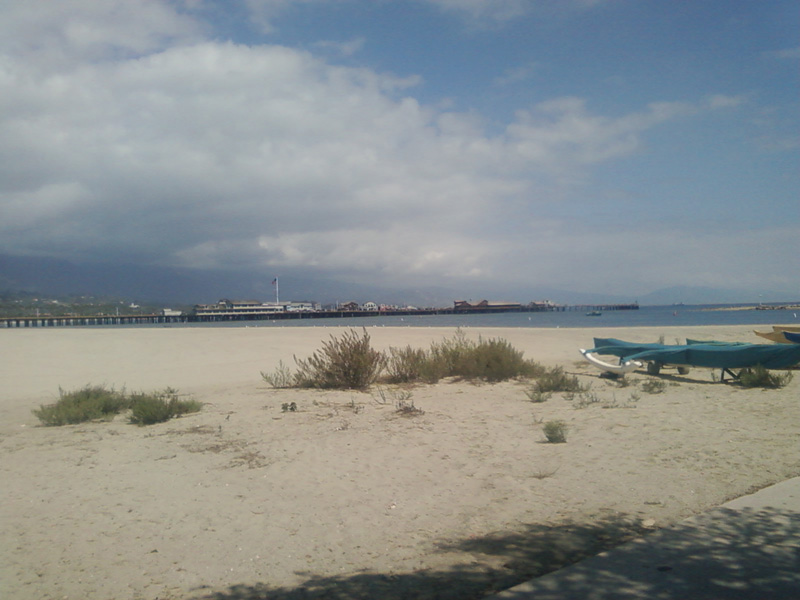 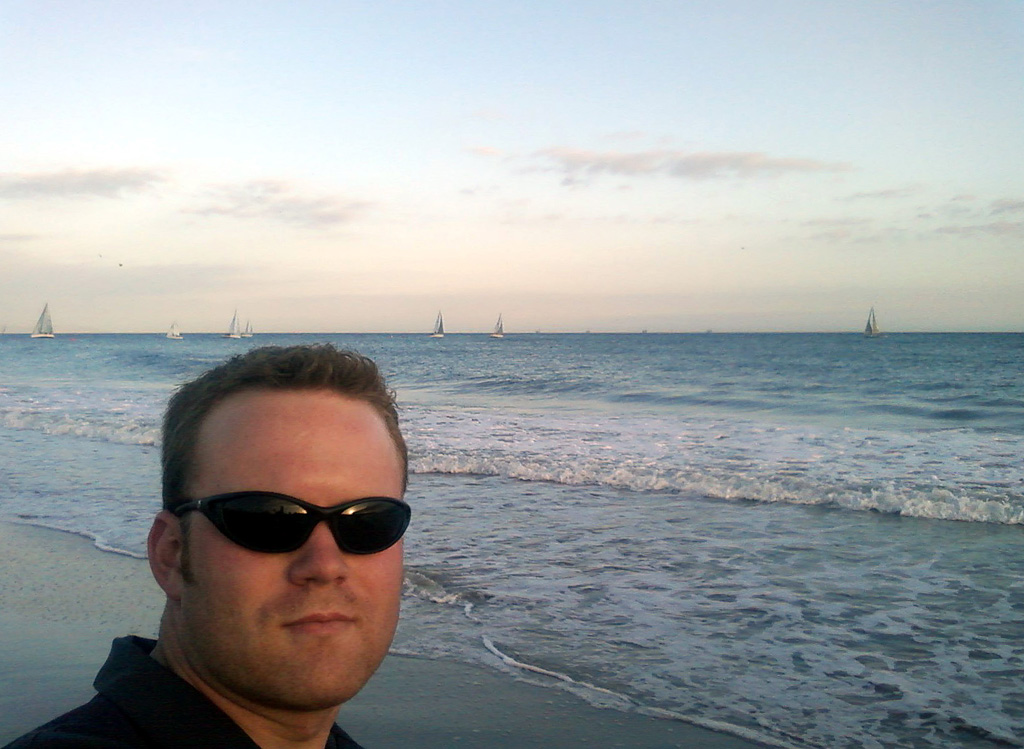 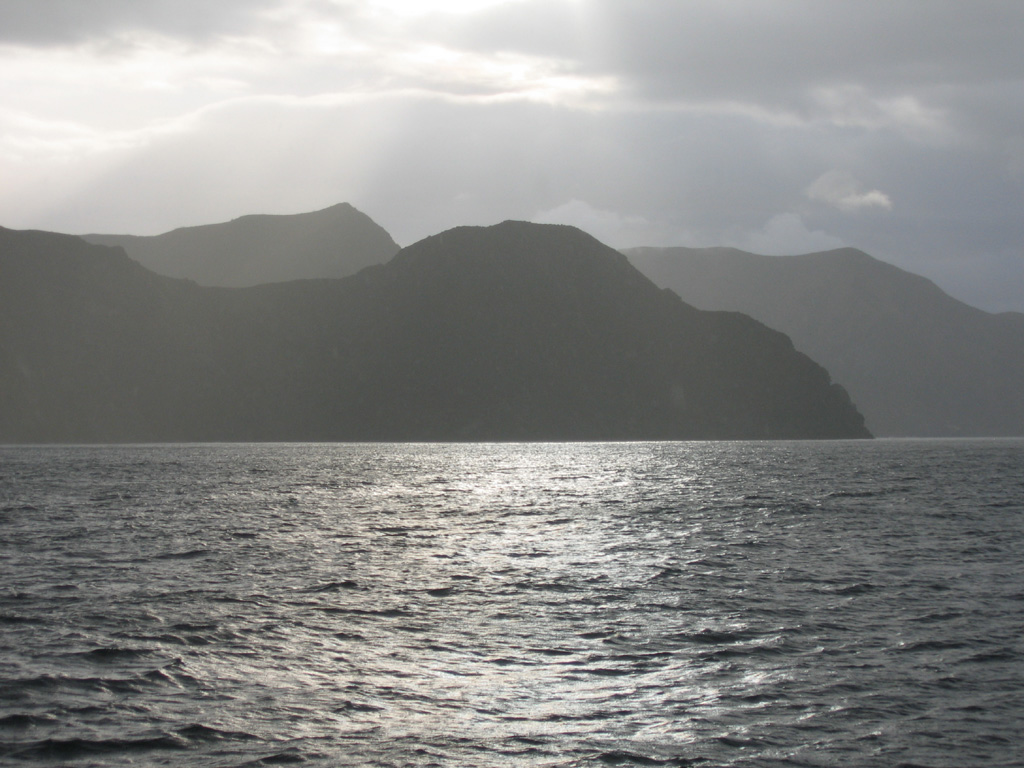 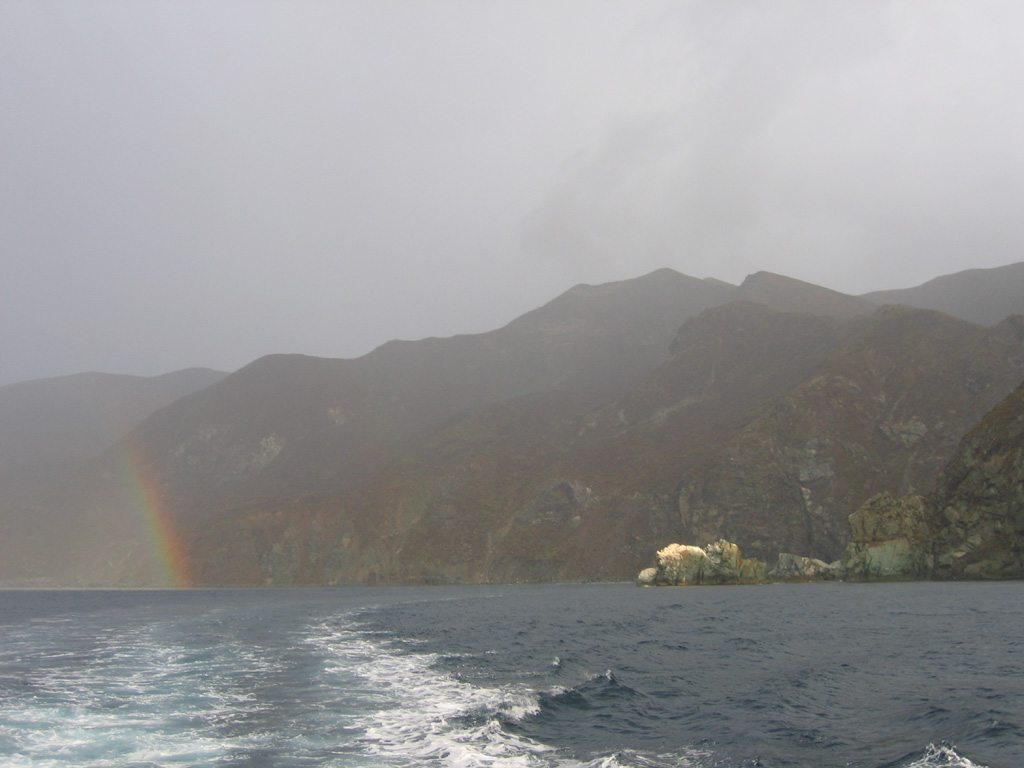 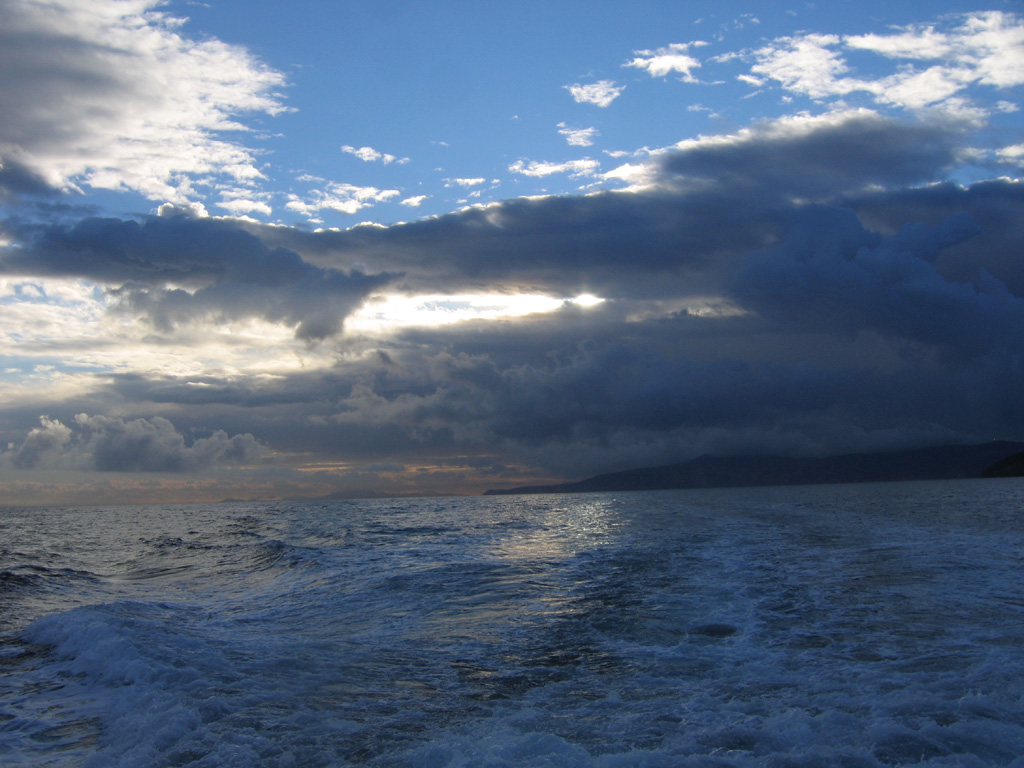 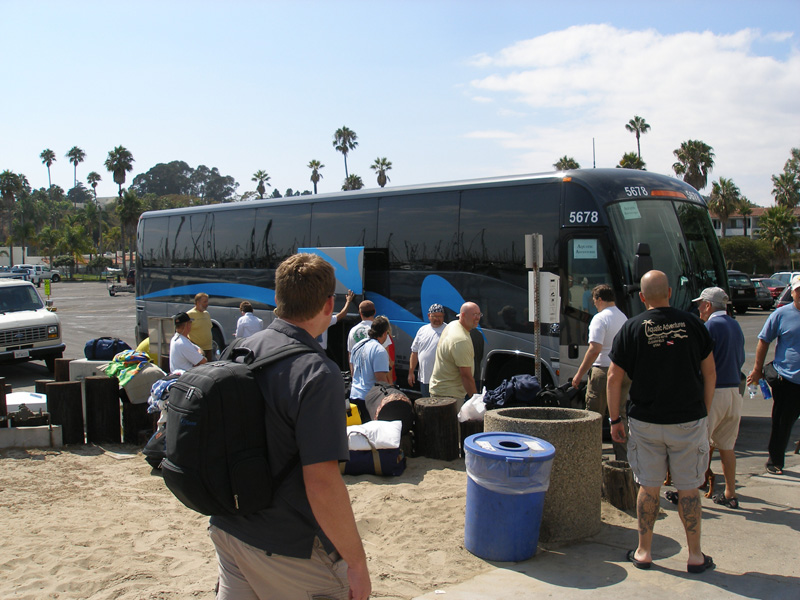 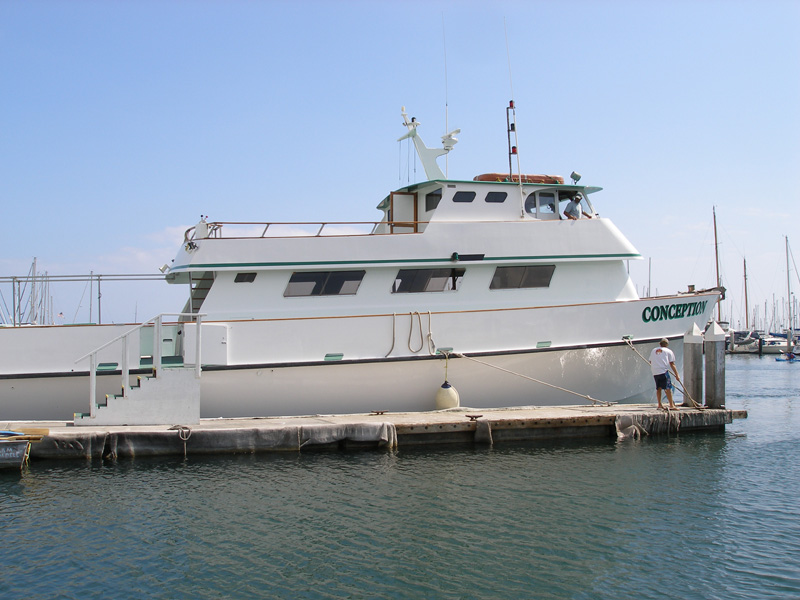 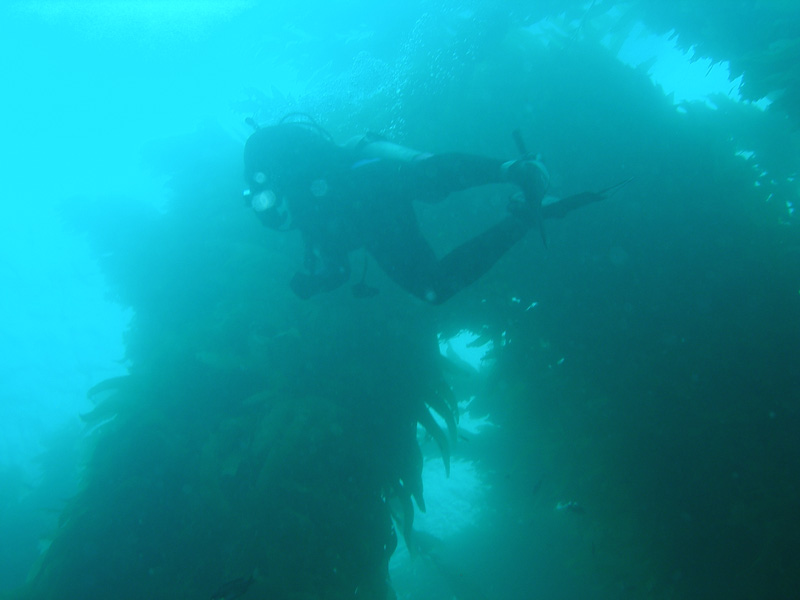 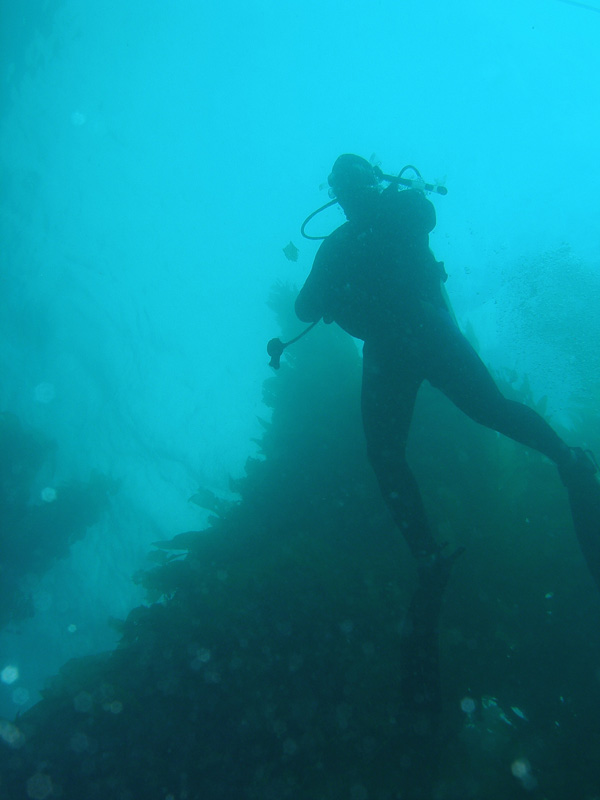 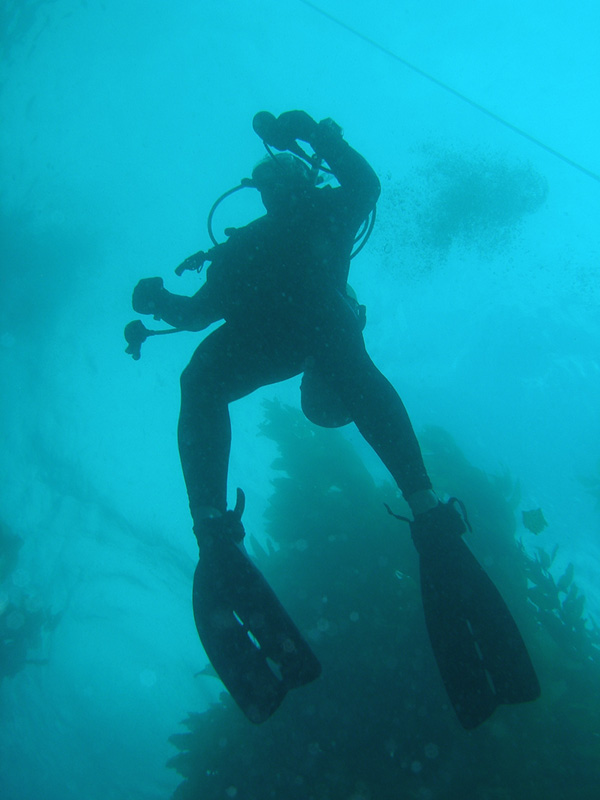 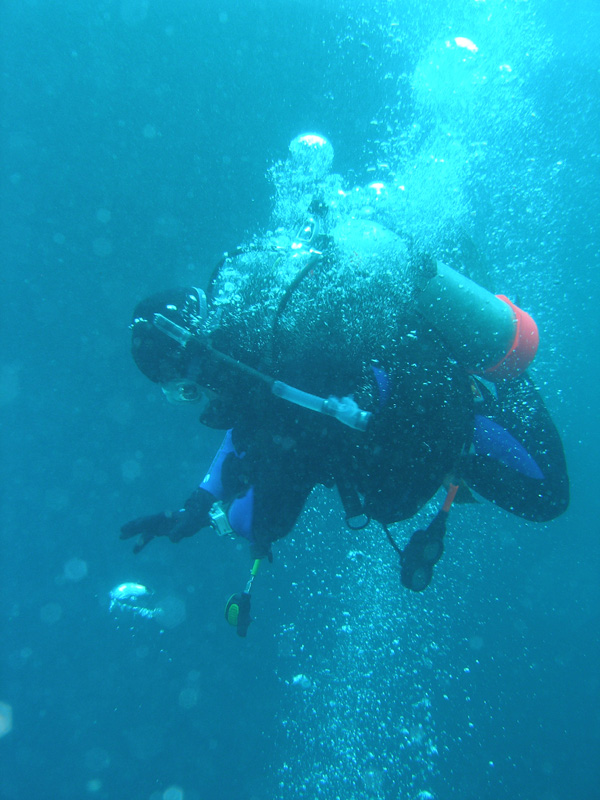 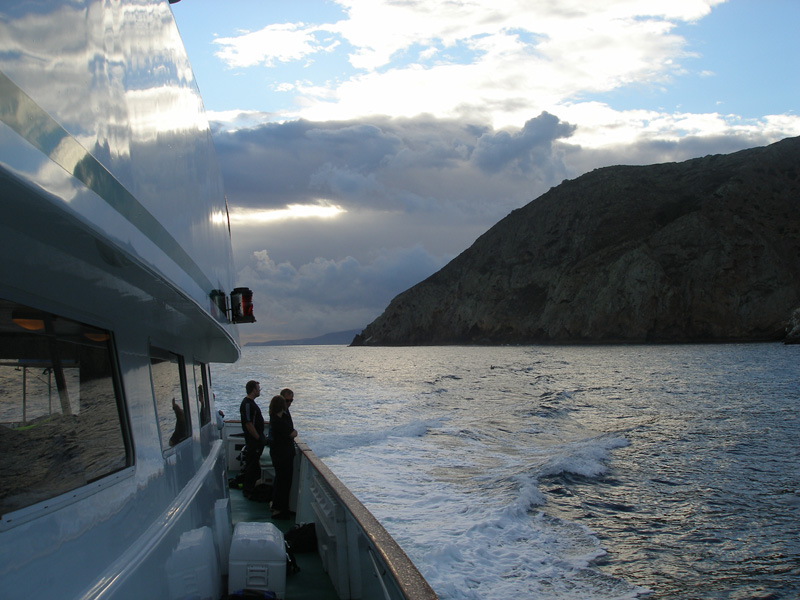 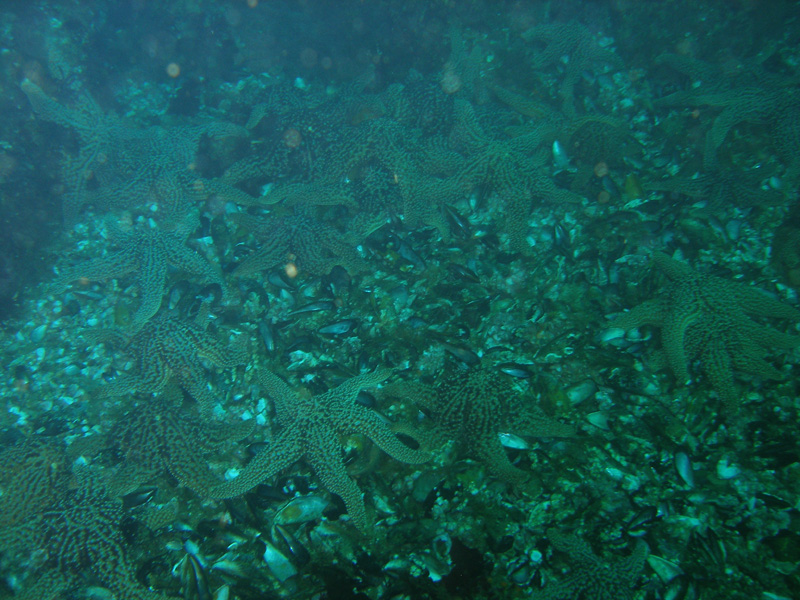 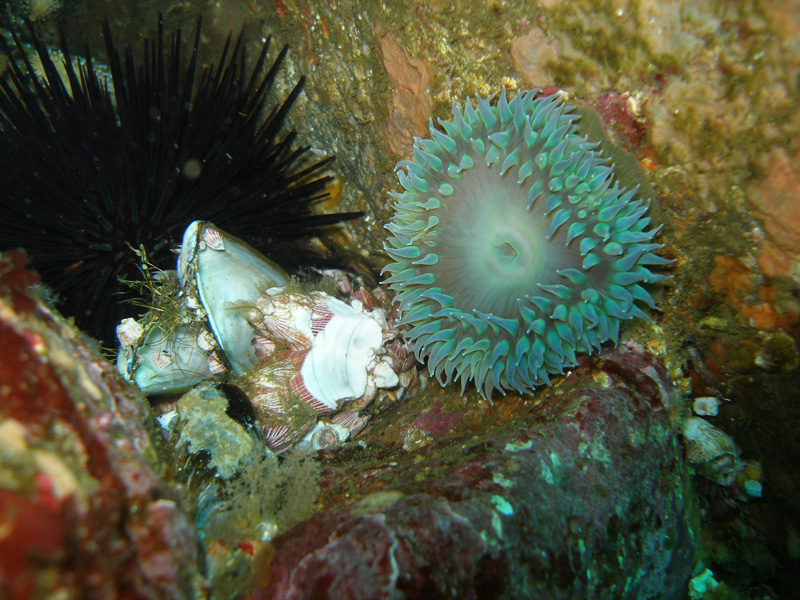 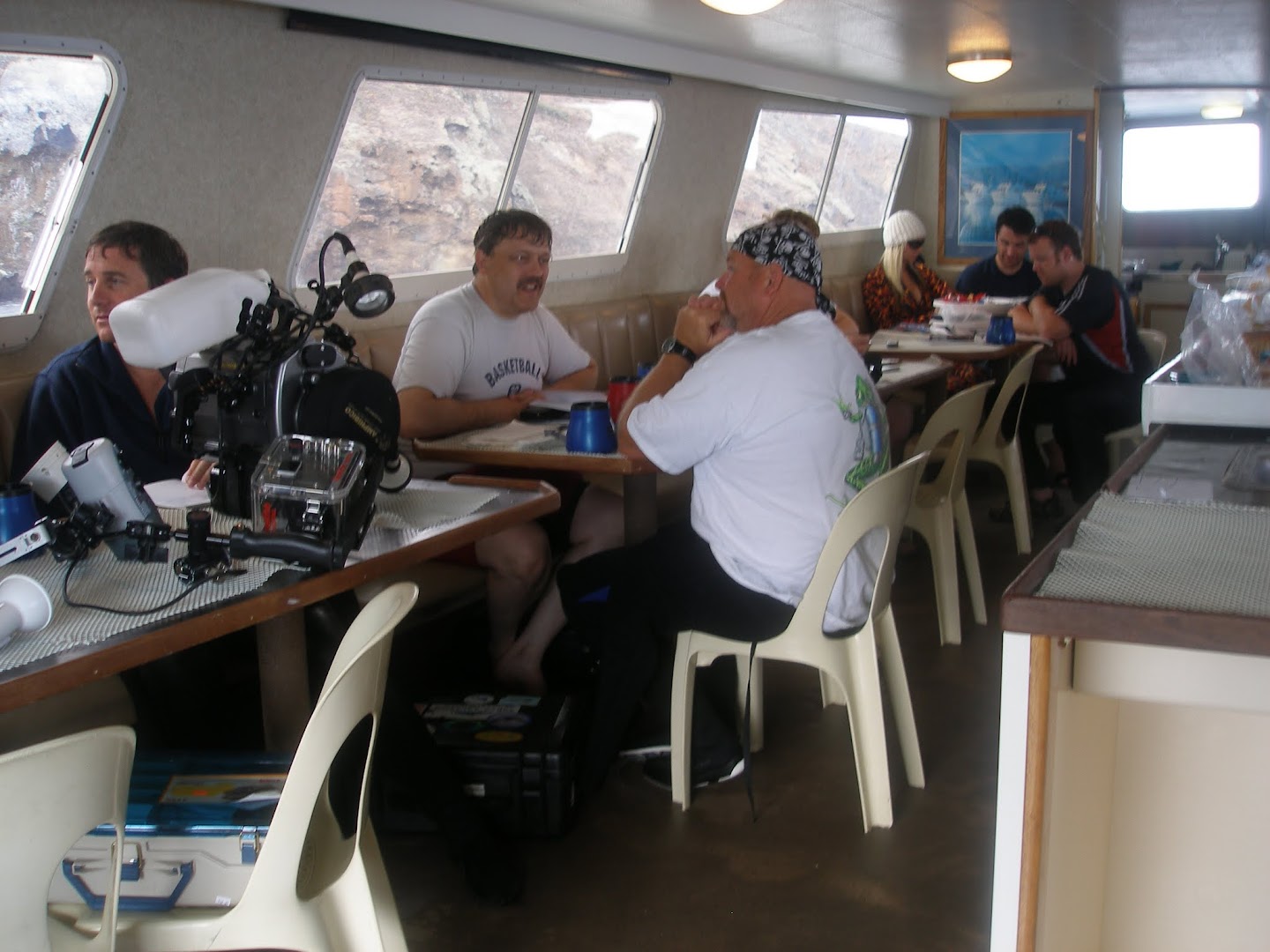 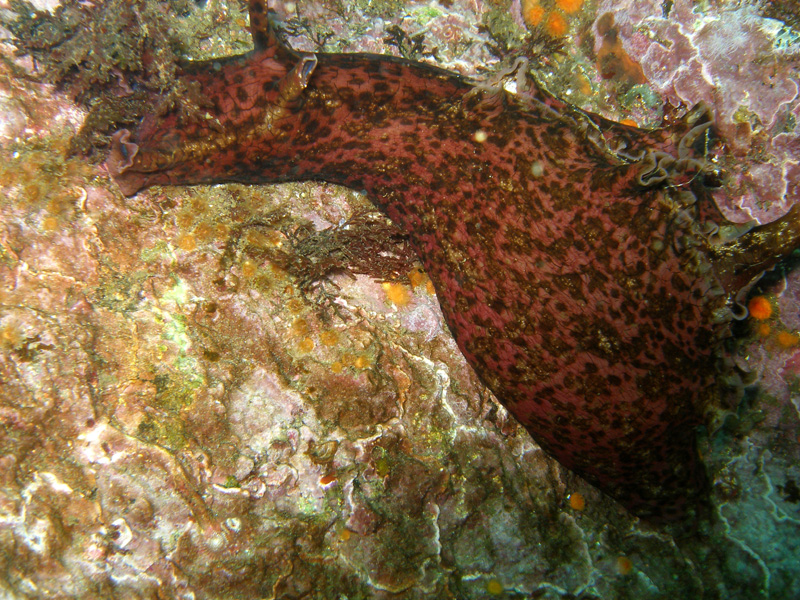 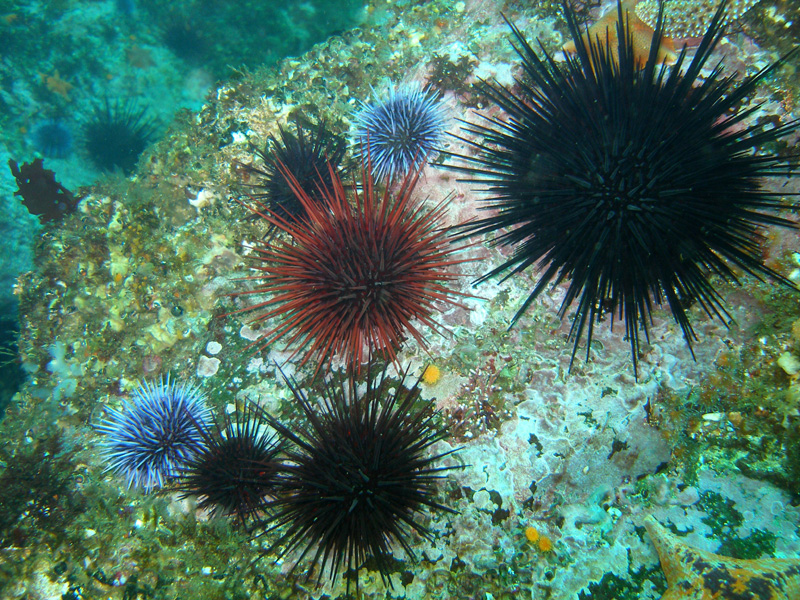 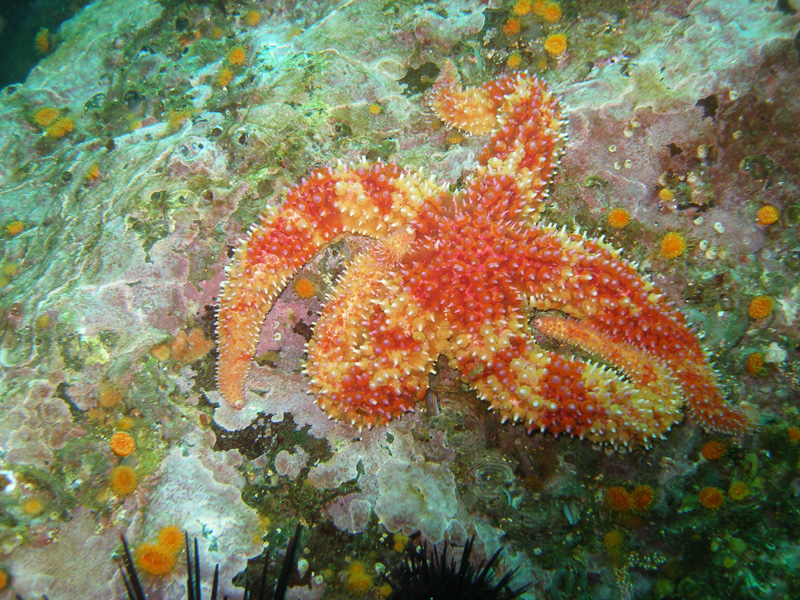 It all started a little after 11 pm on a Tuesday night. I drove off to pick up a friend, then head to the dive shop to load all our gear up onto a bus. Then we were off into the night. Our driver was kind of skittish, but excelled at driving straight. As soon as corners came up it was one jerky move after another, each one jarring me awake. On the stretch of freeway between Cedar City & St. George it was like he was dodging squirrels on the freeway. Fortunately we got a new driver in St. George, and it was super easy to sleep while she was at the wheel. We stopped in Primm for breakfast where we dined to the sounds of jackhammers. That afternoon we arrived in the Santa Barbara harbor and loaded our stuff on the boat then went out to eat. We had 6 hours to kill before we left.

Overnight we headed to Catalina Island for our first dive. By morning we’d been travelling for 36 hours. We spent most of our trip off Catalina due to a storm making for rough water around the Channel Islands. That morning I hopped into the ocean for the first time. As many times as I’d been to the coasts, I’d never been in the water. All I can say is that ocean water tastes much saltier than I thought it would be. It was pretty cool to dive in that area since there is a ton of kelp to swim through, and there are tons of starfish and urchins. I only saw two horned sharks, which don’t really look like sharks, and are really small, so nothing too exciting.

The boat had 3 levels, the lower being the bunks – which are basically coffins w/ a drape on the side stacked 3 high. The main level had the galley w/ the kitchen, and tables along both sides, and the diving deck. The top level was central ops for boat operation and staff quarters, with a deck to lounge on. I really didn’t know what I was in for living on a small boat with close to 40 people and it rained half the time so we couldn’t only occupy half of the boat, and my only escape was the water. I went a little crazy.

The last day we finally made it to an actual Channel Island – Santa Cruz, and the diving was 10x better. So many colors of urchins everywhere, same as starfish plus we had a sea lion and a seal swim around us, but only had two dives. En route between dive sites there we took the boat into what I believe was the world’s largest sea cave and took the boat about 100 feet in. On the ride back to Santa Barbara we saw two blue whales fairly close, and off in the distance a killer whale.

The ride back was mainly through the night, full of restless sleep due to several army movies a few guys wanted to watch, so it was all nice and peaceful, then *BOOM* I was awake again. I got home at 10 am. Would I do that trip again? Maybe – if I flew down, and didn’t stay on a boat the whole time. For the next 3 days, my world wouldn’t stop rocking back and forth.