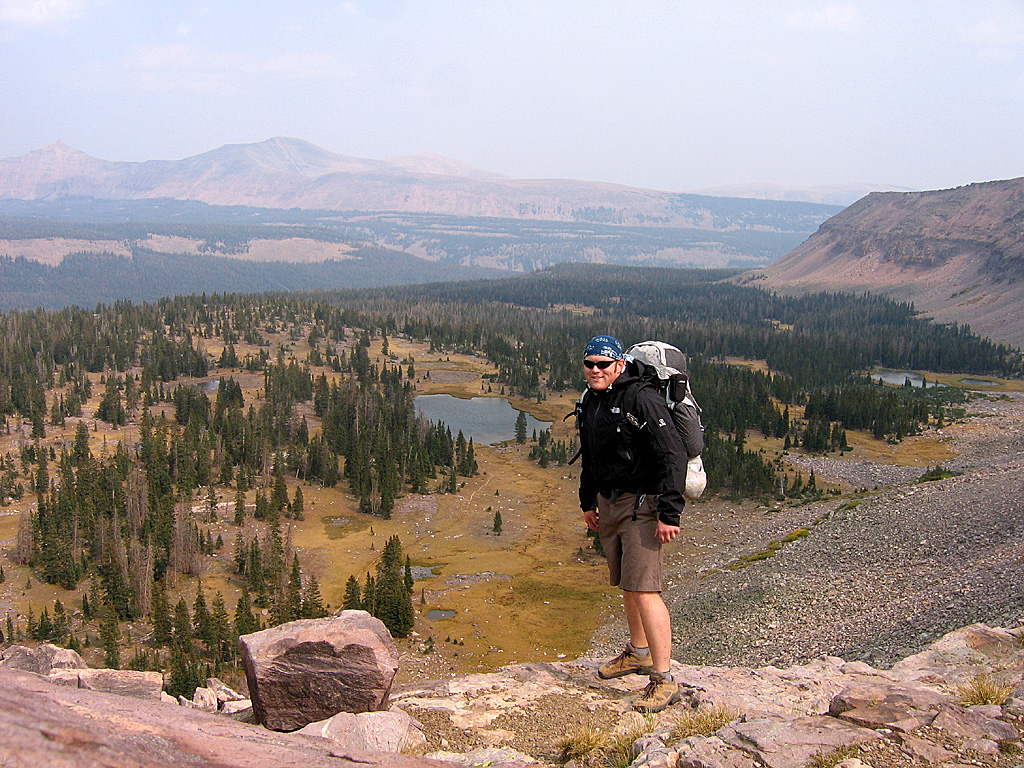 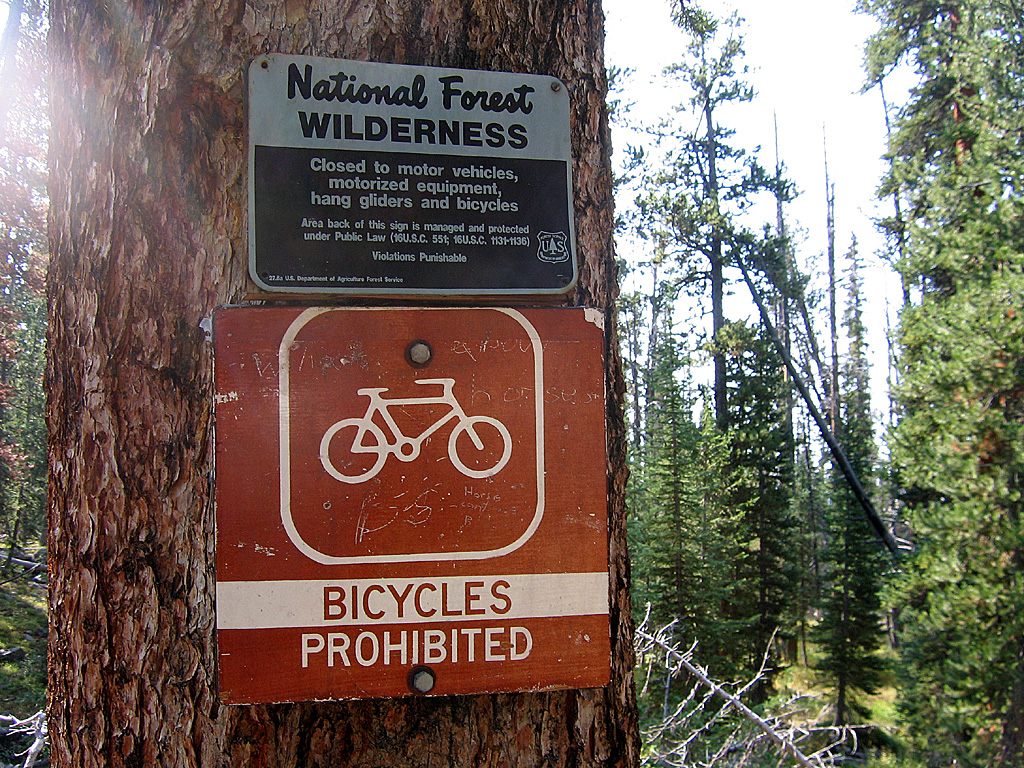 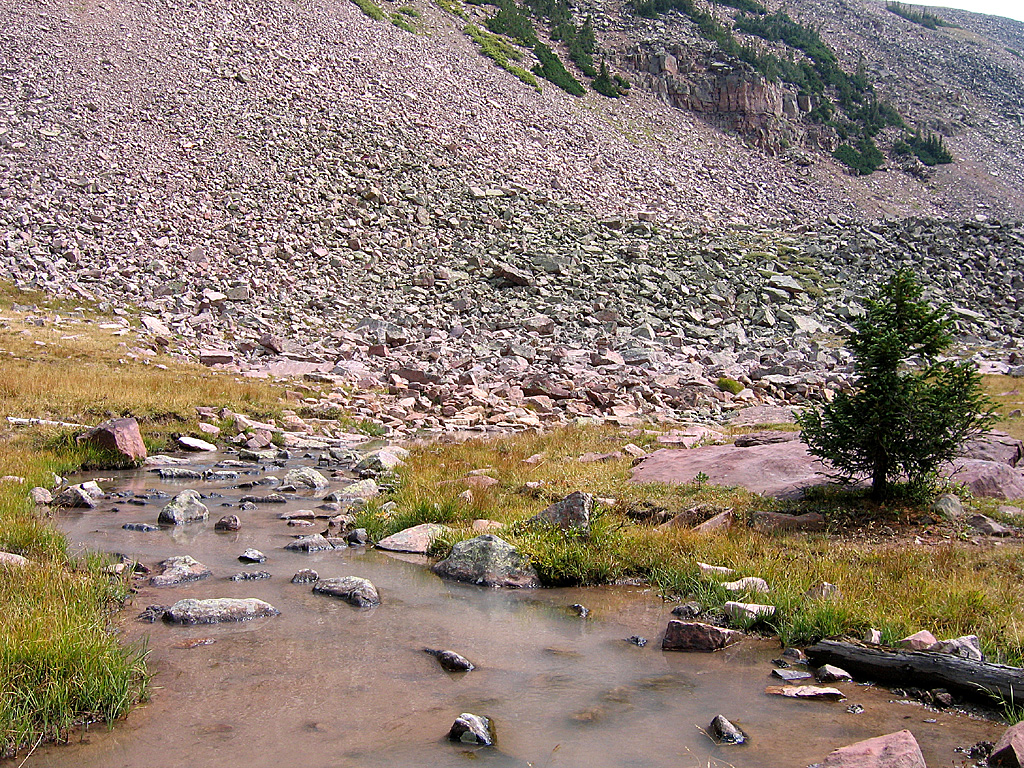 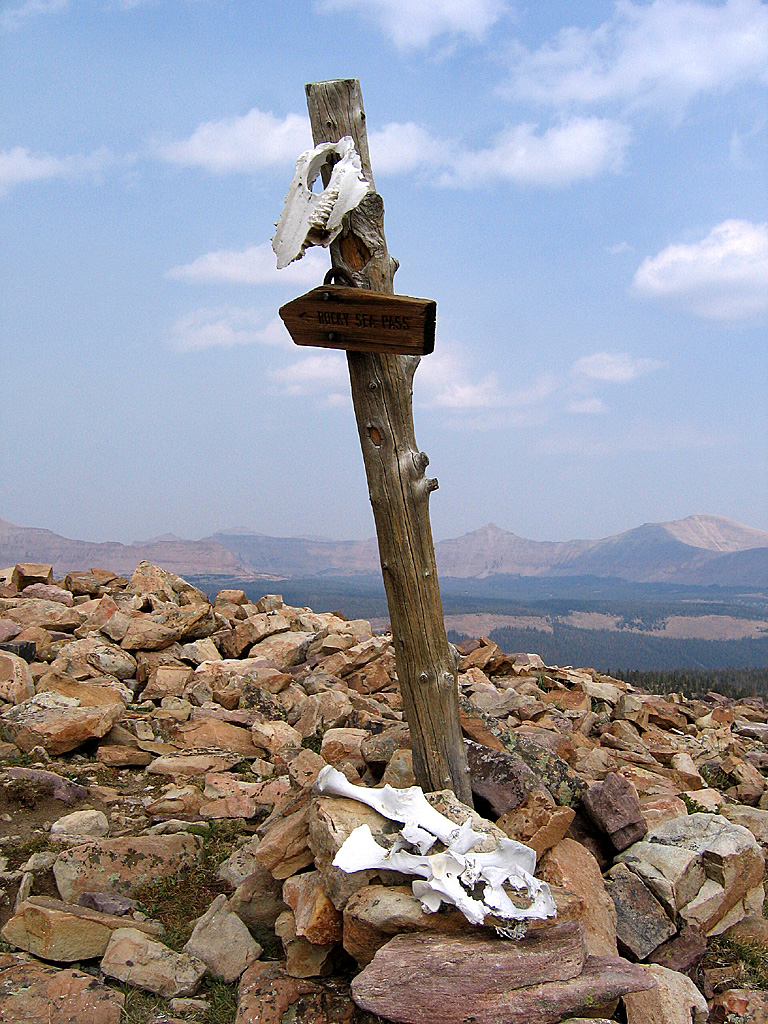 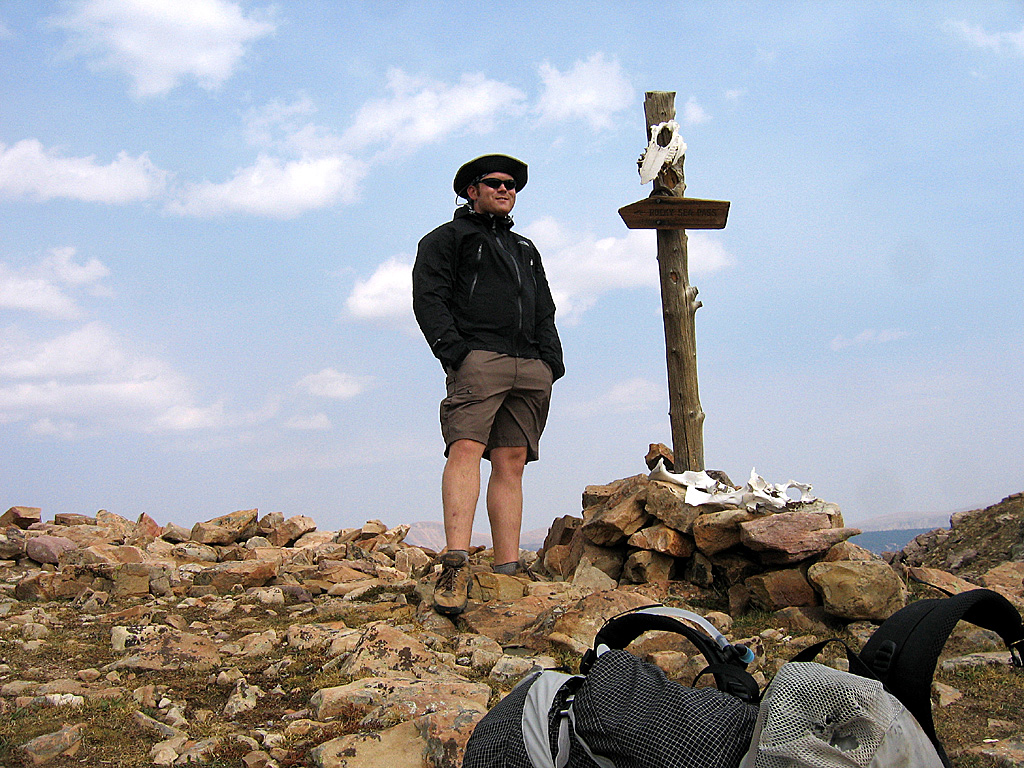 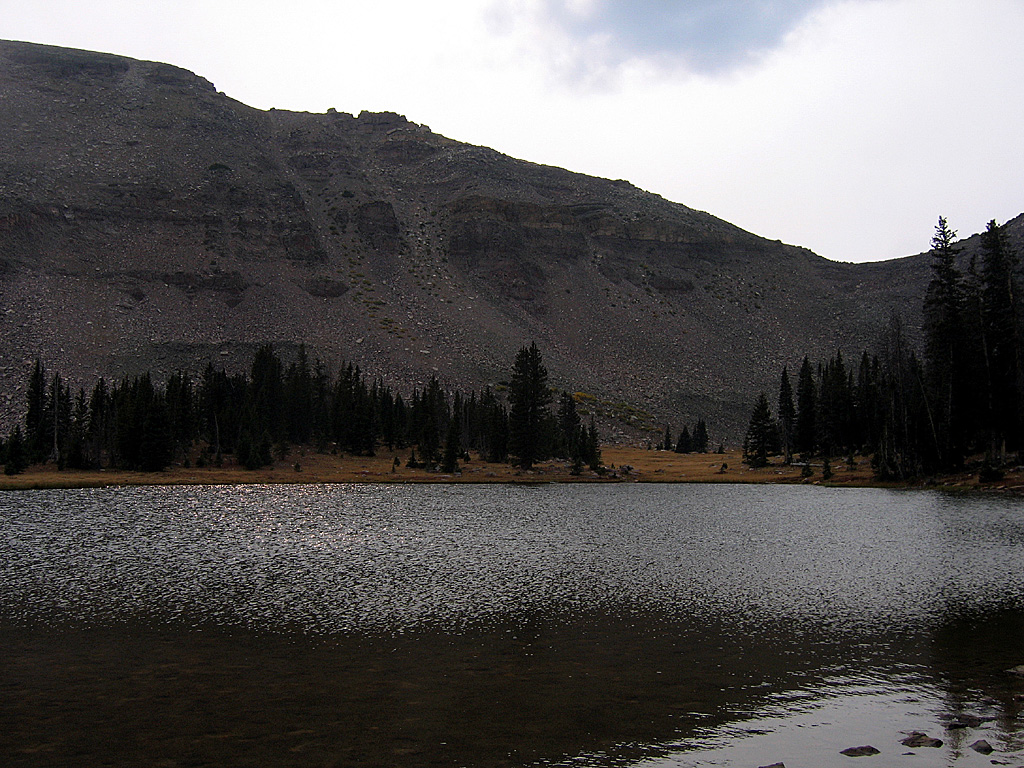 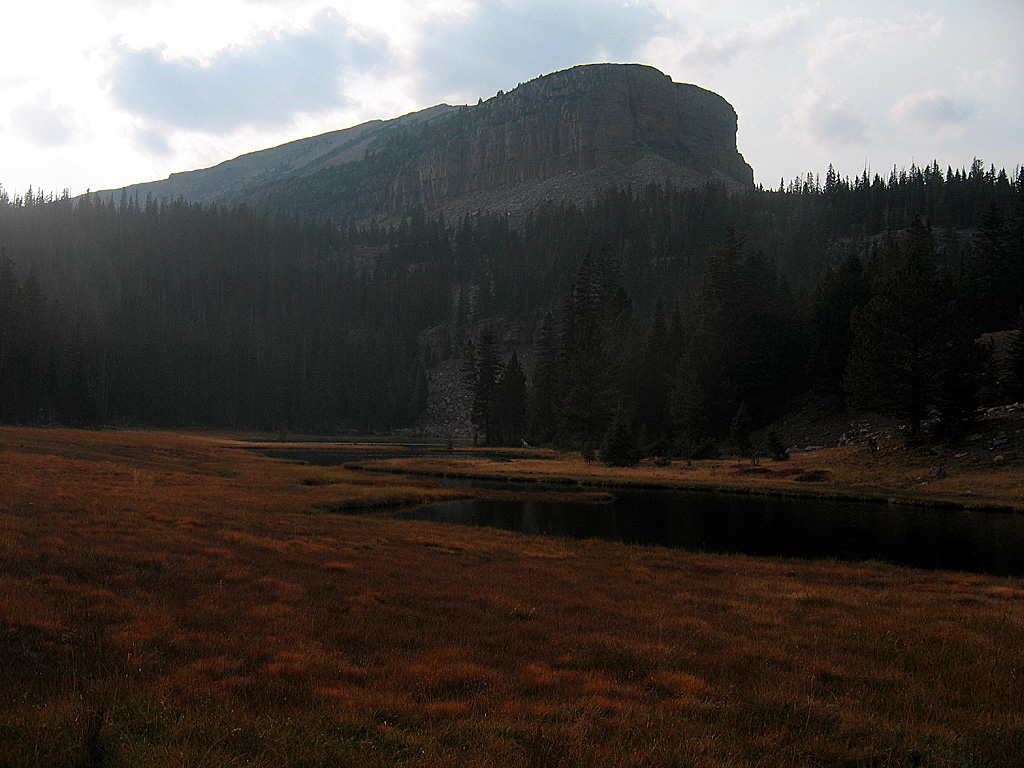 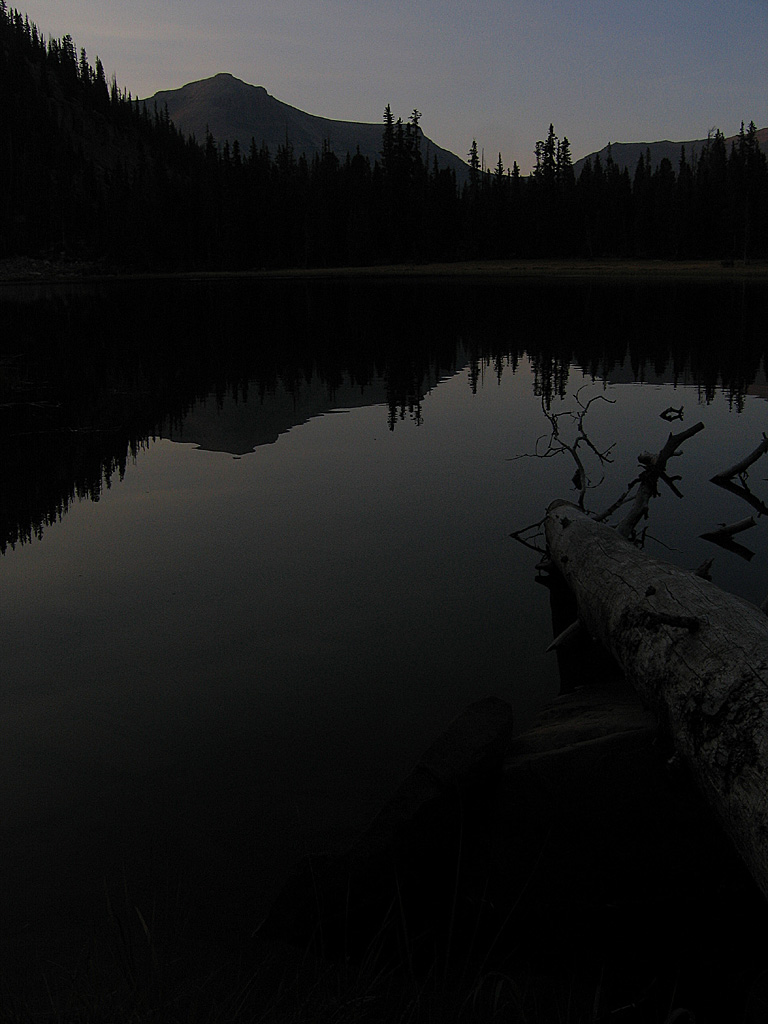 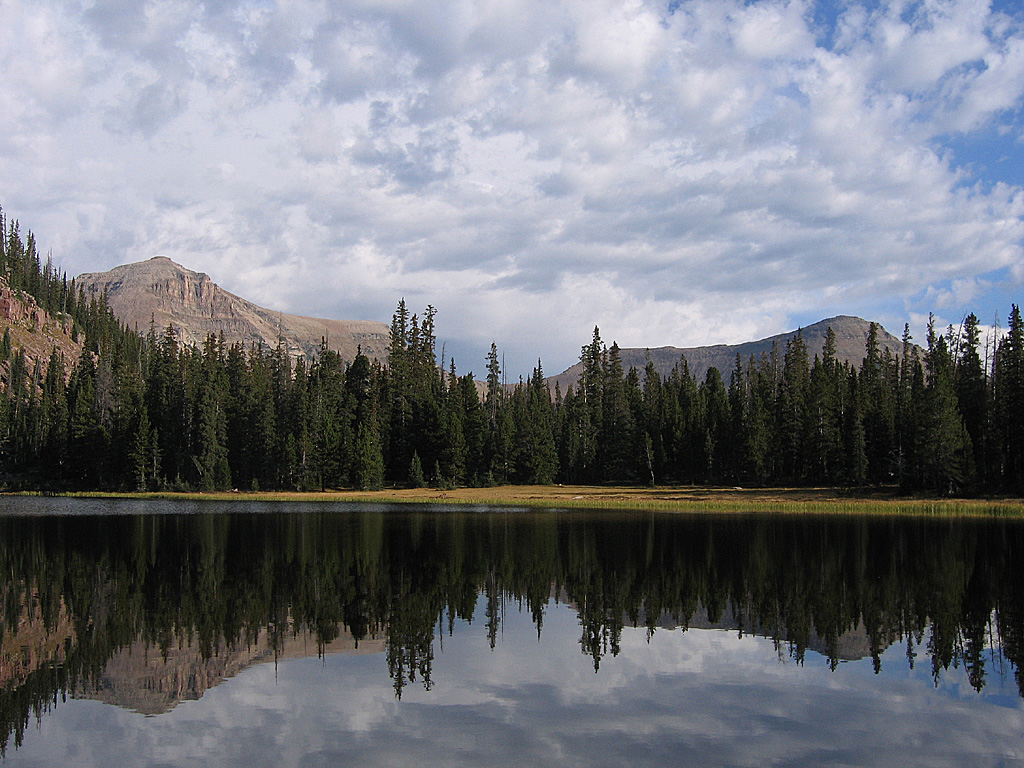 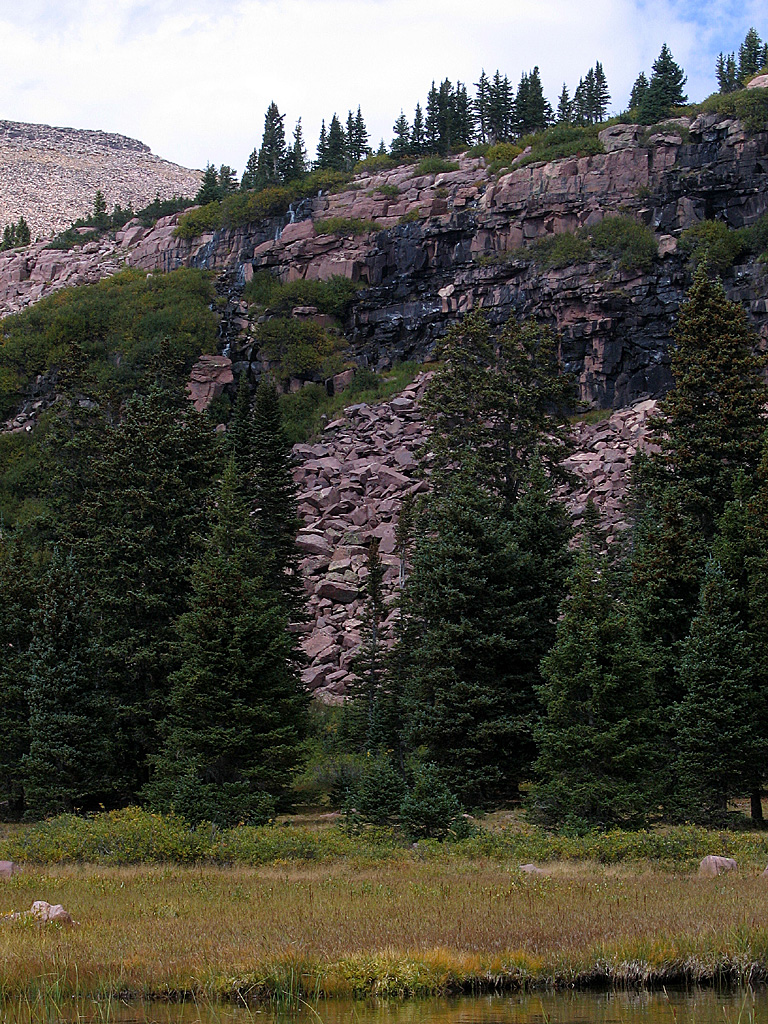 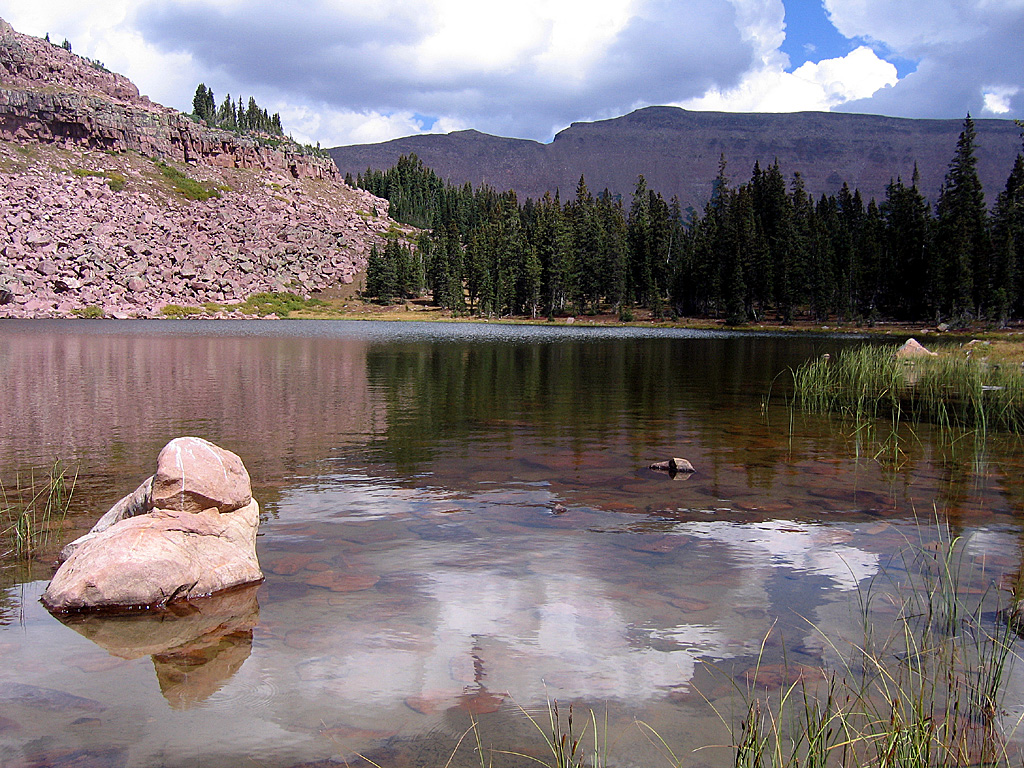 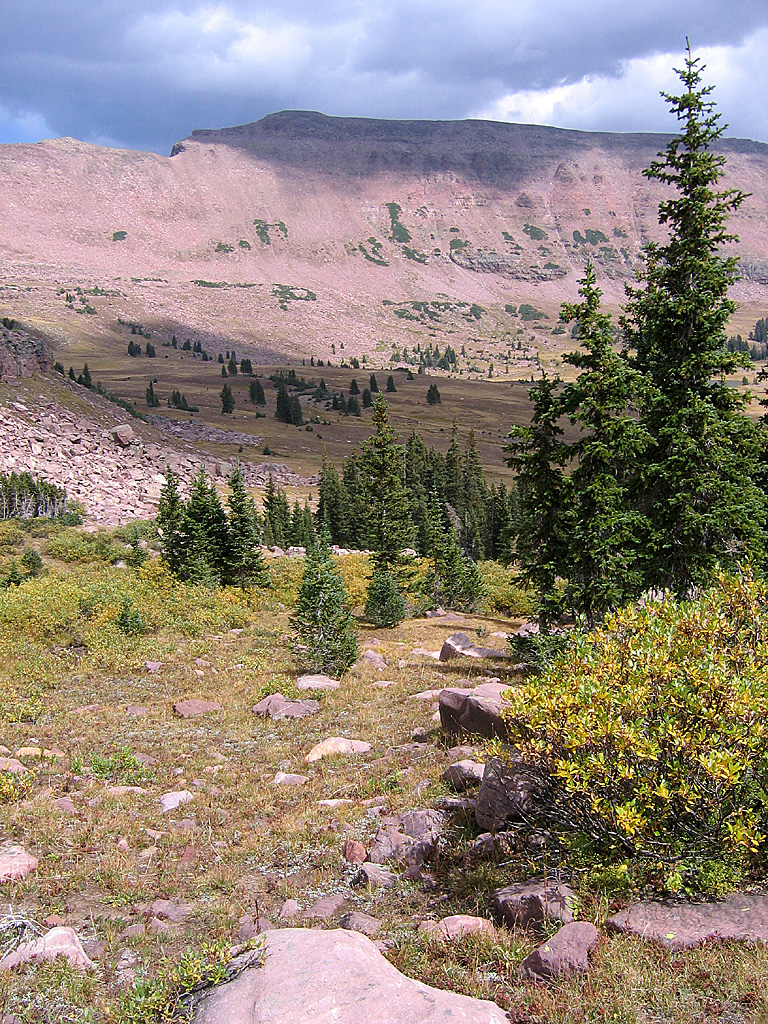 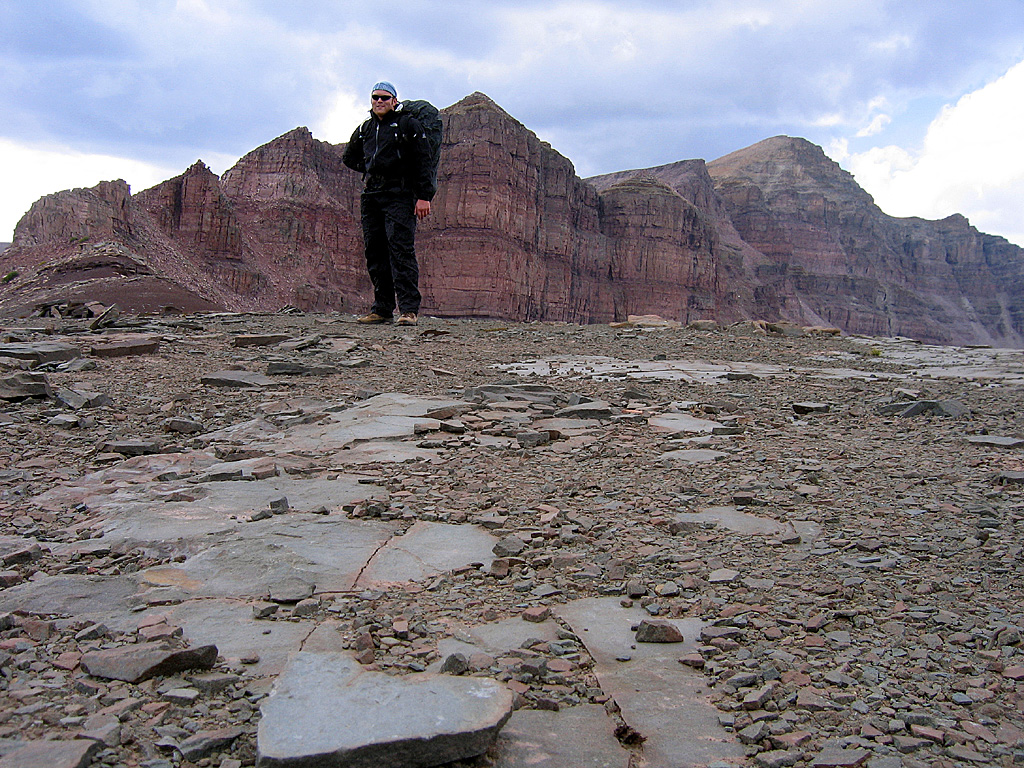 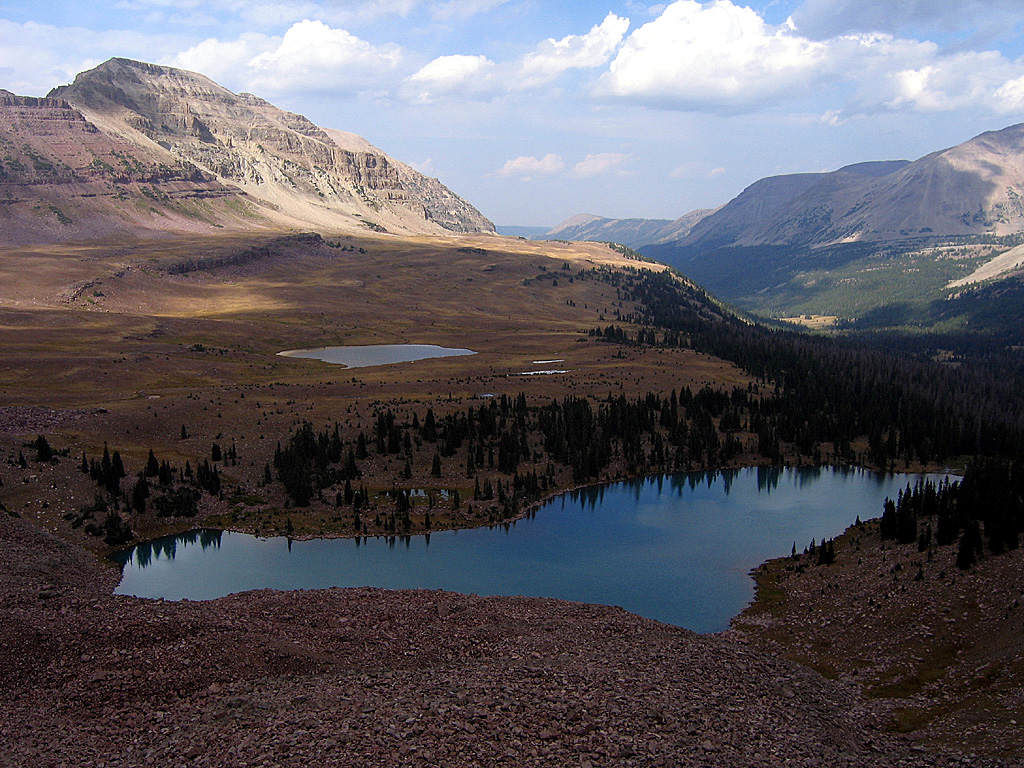 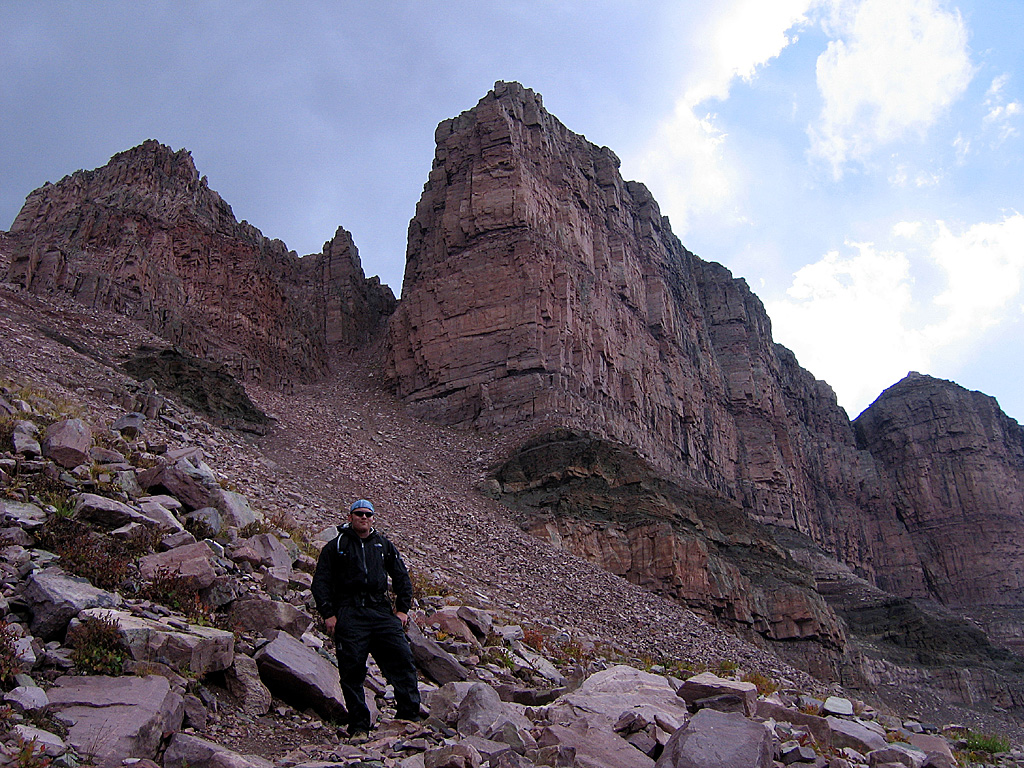 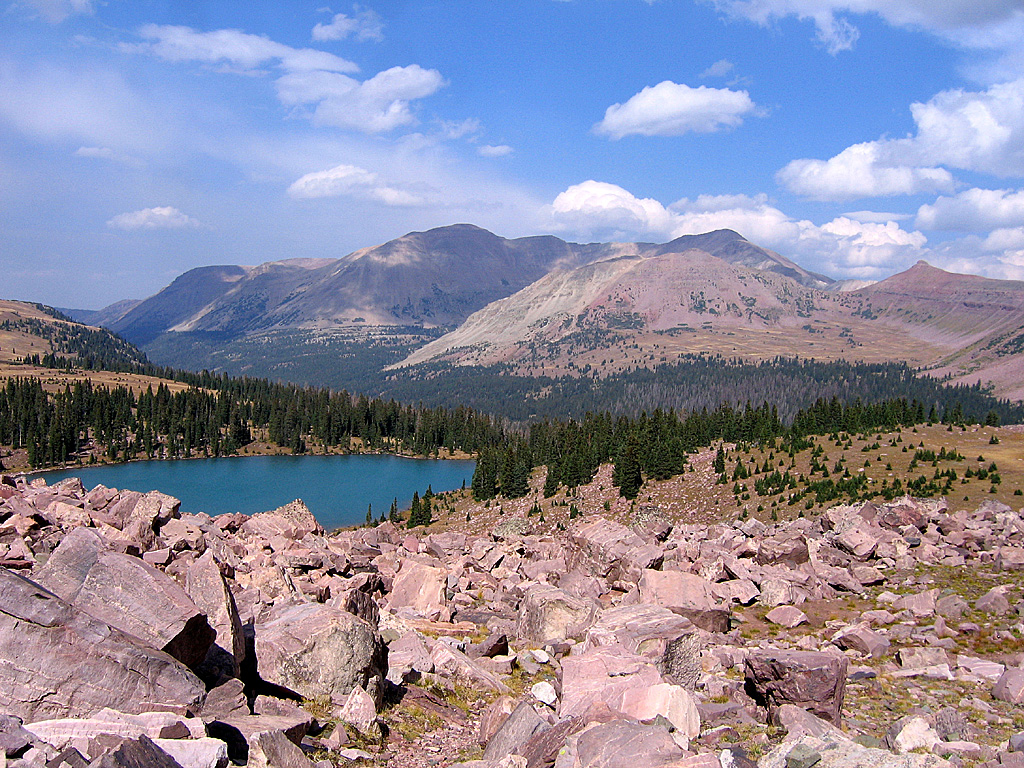 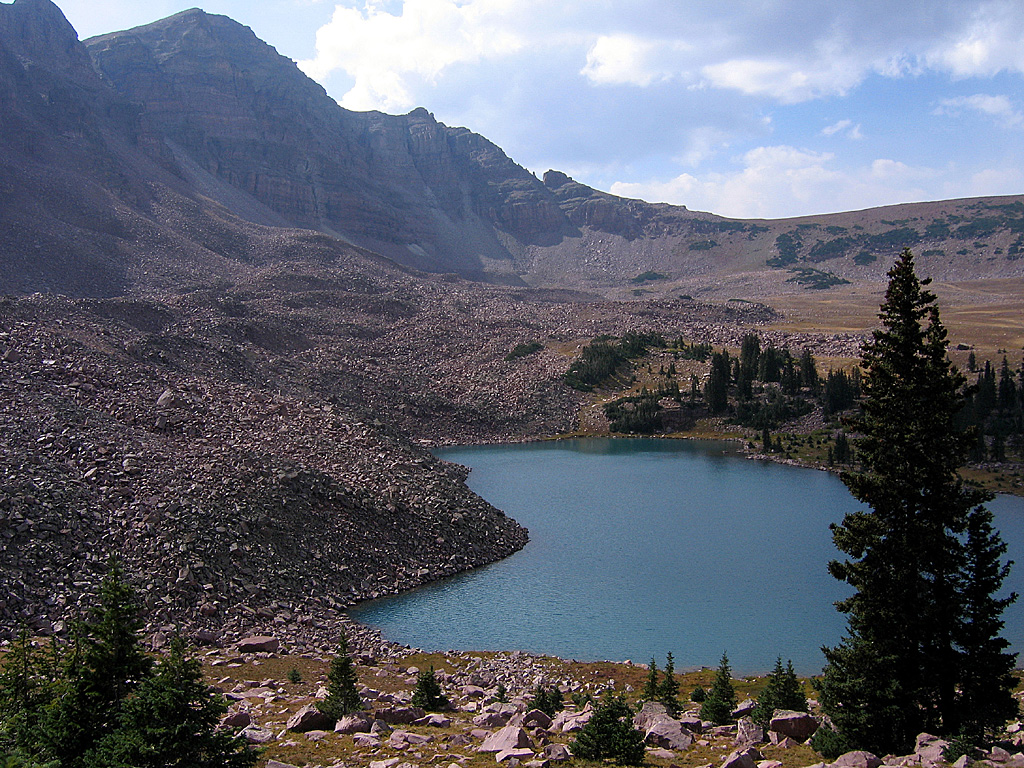 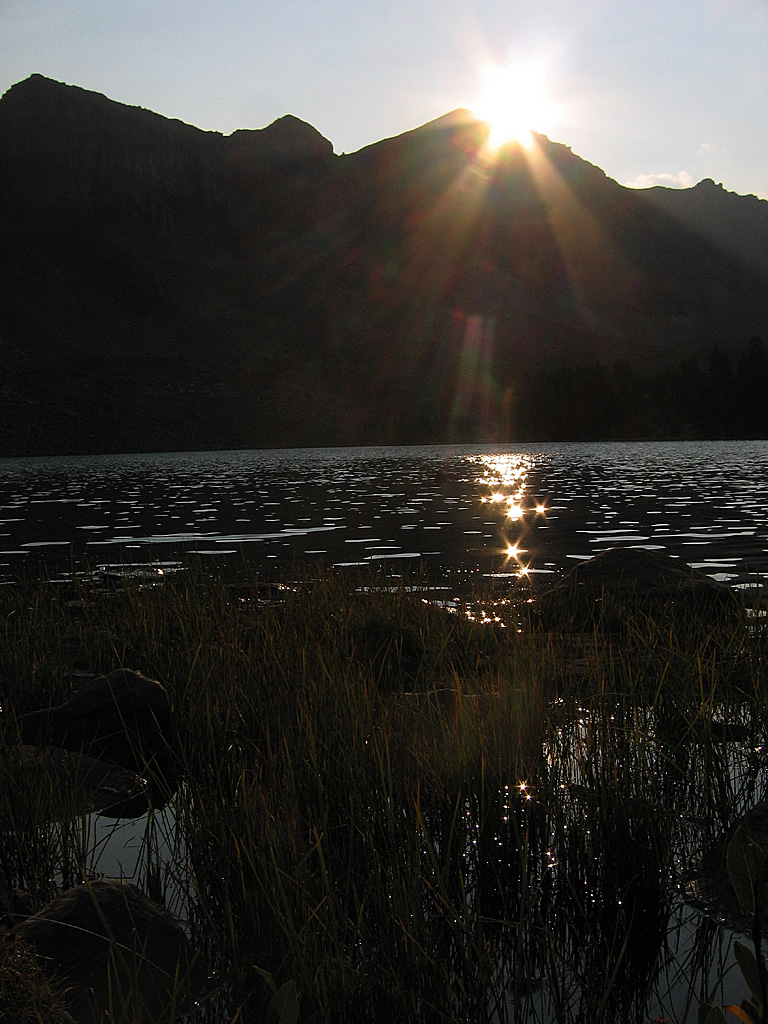 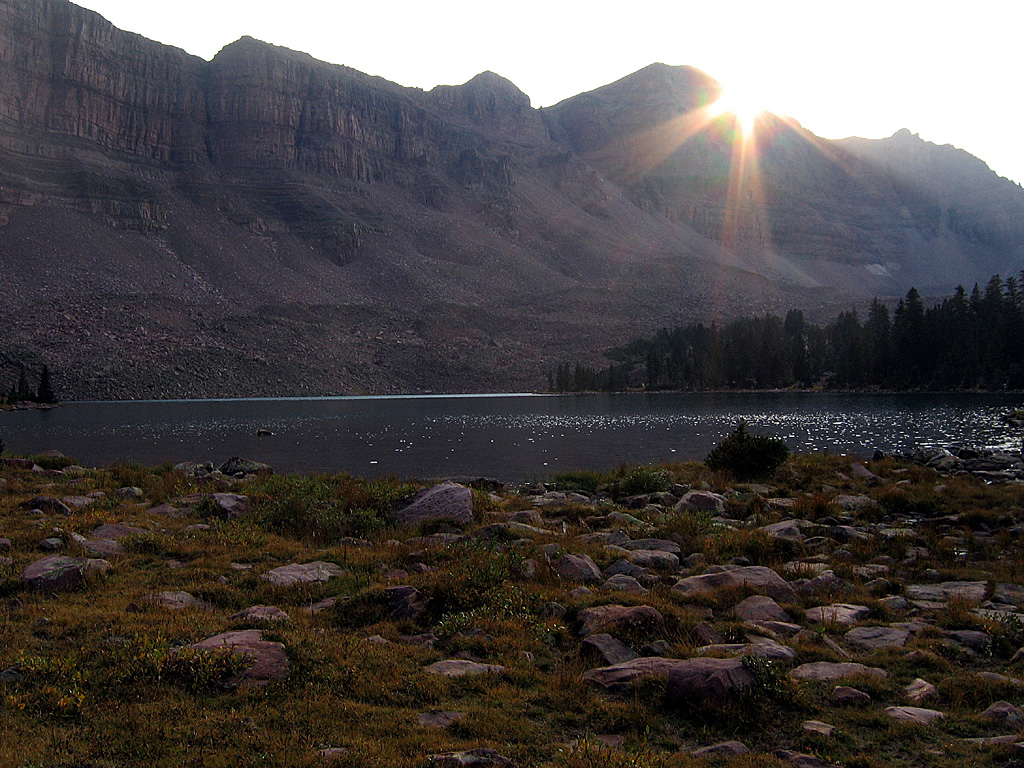 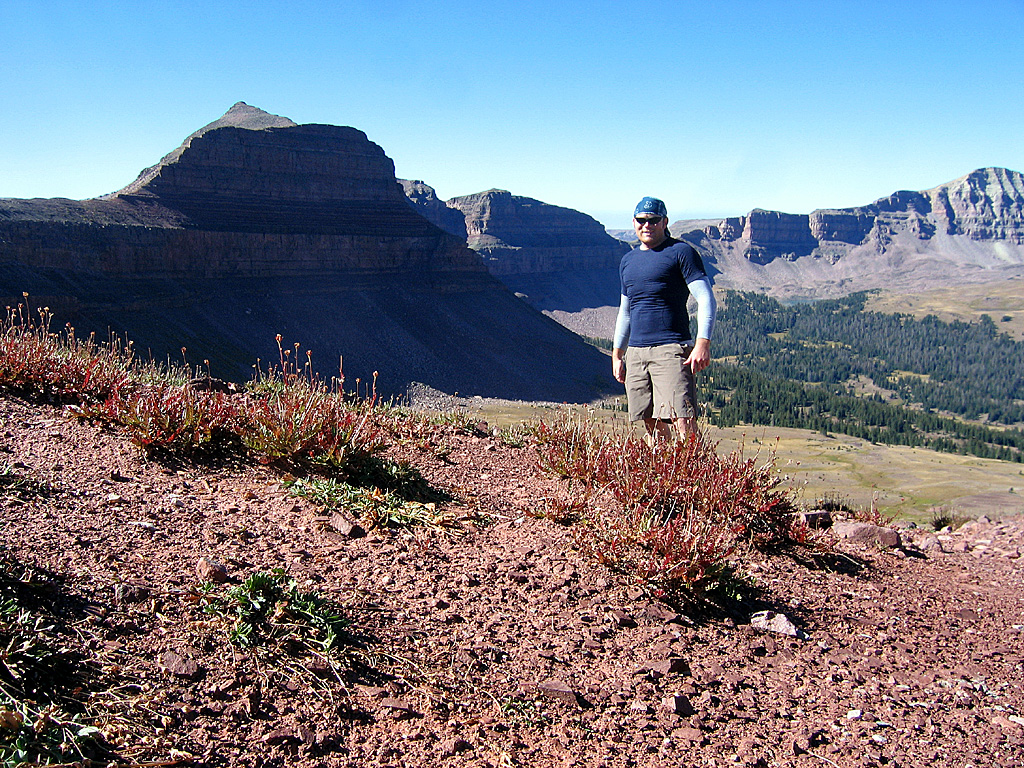 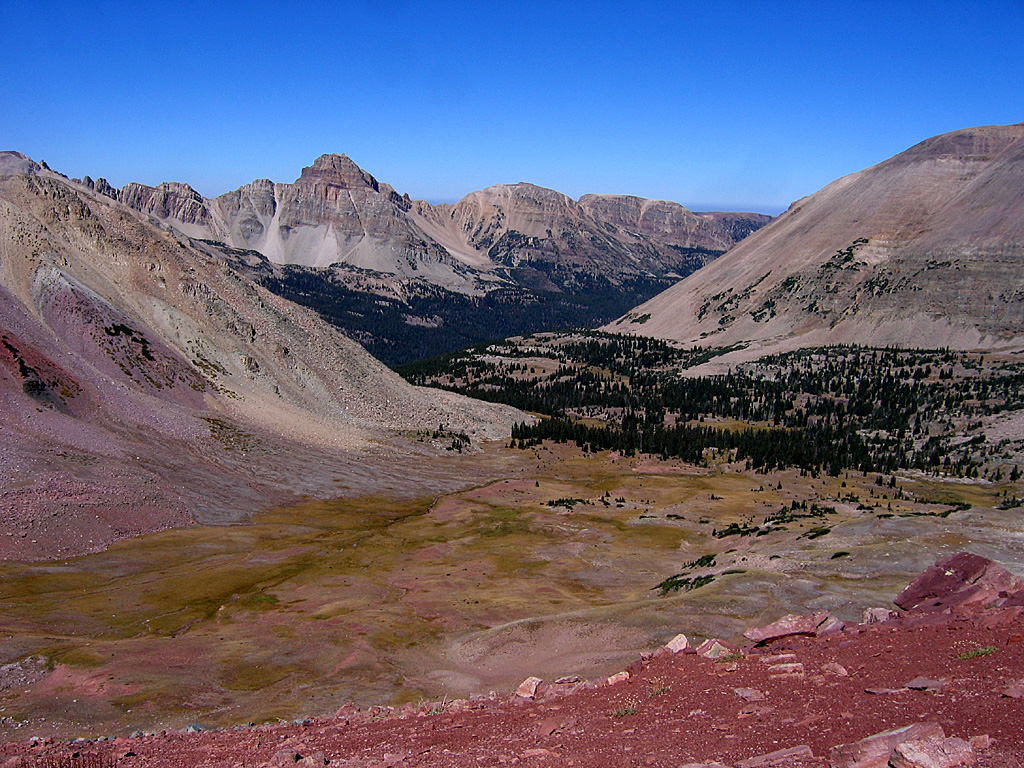 I’ve always been compelled to stay in the desert & avoid the mountains when backpacking, but I wasn’t going to pass up an opportunity to get into the Uintas. The weather was supposed to be between 60/40 degrees the whole time, but that was way off. After a short detour down the wrong drainage to drop a car off – that being my fault, we made it to the East Fork Blacks Fork trailhead at dusk & stayed the night. It was close to freezing, and I was trying out a new Big Agnes 10Â° sleeping bag w/ the Big Agnes sleeping pad.

I was initially concerned about not getting enough insulation on the bottom side through the pad, but that was the last problem. The first thing I noticed was that to cinch things up tight and keep your head warm you have to stay flat on your back because the bag is fused to the pad, and the pad isn’t going to move with your head, so it’s either breathe into your bag and build up condensation and reduce warmth since it is down, or keep your head completely out of the bag so you can move around. The bag is cut generously enough that you can, with a couple weird movements get onto your side, which is nice, but I noticed quite quickly if my feet touched the tent, the insulation was lost and my feet froze, or if I crossed my arms over my chest, I lost insulation there, so basically I couldn’t get comfortable at all. Then in the morning when I tried to sit up, I was reminded again that the pad was attached. Oh yea, and it takes some new skills to get your sleeping pad into your sleeping bag, but nothing detrimental. The 10Â° rating was a joke. I know they’re always off, but this was excessively so. I wore thermals, and several layers of clothing while in the bag, and still froze even when the temperatures were above freezing – well, not just freezing, but uncontrollable shivering at times. When it dropped into the 20’s one night, I just couldn’t sleep at all. I had to focus on keeping everything in a perfect position for optimal insulation so I didn’t completely freeze. I’m going to see if I can return it. I was excited to get it & try it out, but the limitations of movement, and terrible temperature rating made this a bad buy. With a different design I think the insulationless bottom concept could be much better.

Anyway, the Highline trail is pretty cool, getting into some very remote areas. It takes some time to get out of the forest and start seeing the beautiful vistas, and drainages while climbing over the passes. Spending a night close to 10,000 ft before starting out definitely helped with any altitude problems I’ve previously experienced, and I was definitely concerned with carrying a pack at that elevation. Carrying extra gear & clothes for the weather added more than a few pounds.

There is a lot of forest between the trailhead and Pigeon Milk Spring where you climb above treeline and start seeing some views to the South and West. Smoke from fires in the region were clouding up the view, but they were still great.

The climb up to Rocky Sea Pass from this side was fairly easy. Once on top the wind was just howling, and was pretty cold, but the views to the East were incredible. There are several small lakes at the bottom of the pass, and there’s a great view of the trail ahead – if you can imagine it going through a ton of forest, dropping down to Rock Creek and climbing out the other side, and around the corner. Brinkley Lake is out of view from up there, but not technically that far away. The trial leads away from it before turning back northwards.

Brinkley Lake had a great view of the mountains to the North, and was a nice place to camp – there are many great sites to the East of the lake across the trail. We had some coyotes visit our camp that night, but I was knocked out w/ benadryl cause of allergies, so I didn’t notice.

Day 2 we re-entered the forest, lost some elevation and gained a whole lot more. After doing the majority of the climbing, the trail leveled out and we were crossing large meadows for a while providing a nice change of scenery. I was hoping to see some more animals by this point, but it just wasn’t happening. We rounded the corner, and hit Ledge Lake – there are some cool waterfalls coming down the cliffs. At this point we were approaching some new elevation highs, and I was noticing more than ever that I had to start breathing hard before moving just to get the oxygen in the blood up to decent levels.

Climbing Dead Horse Pass some nasty weather moved in, and I watched from a hundred feet below the pass as the downpour moved in. Turns out it was frozen stuff that was melting on impact. It moved on in 10 minutes, and didn’t result in much of anything. There was one lightning strike. Big black clouds continued to move overhead so I didn’t want to stick around on the pass for very long. The trail off the pass goes down a steep talus slope, with a narrow trail almost as steep as the slope itself cutting into it at an angle. The first step is the worst, hoping the whole time that you don’t slip and slide off the cliff.

Dead Horse Lake was gorgeous to look down on as we descended, and the storm clouds were flying by overhead.

The camp at Dead Horse Lake had a two walled wind shelter built up a few hundred feet into the forest, w/ two benches and a fire pit, so we camped there. Elevation was 11,000 ft. That night was the coldest with temperatures dropping below 30Â°. I just couldn’t sleep, and didn’t want to take benadryl since it’s effects seemed to be amplified at altitude, and I was paranoid enough being at elevation for so long. I don’t know how I got out of the sleeping bag in the morning. At least I was mostly dressed to begin with since I would’ve completely frozen in the sleeping bag otherwise.

We were hitting Red Knob Pass that day. We had to drop down into a ravine where the temps dropped into the teens, one of the creeks was frozen over, and we were in those temps for so long without sun that my arms went numb. When I finally got into a sliver of sun I stayed there for about 20 minutes just enjoying it. The trail up Red Knob was nice and easy, just slow going to let my oxygen levels keep pace with consumption. Our high point was around the corner of Red Knob at 12,170 ft. I was feeling a little loopy and getting a headache, so I dropped down into the East Fork Blacks Fork drainage pretty quickly. At the bottom of the pass we decided to cut off a day from our trip and head out, accumulating over 15 miles. Ironically it was in the last 15 miles we saw the most animals. Mainly a ton of moose. The trail seems to never end. The last 3 miles just dragged on forever, but end they did.

Overall, there was over 8,000 ft elevation climbed, and over 33+ miles, could be over 35 – the gps batteries didn’t last, so I’ll never know for sure.