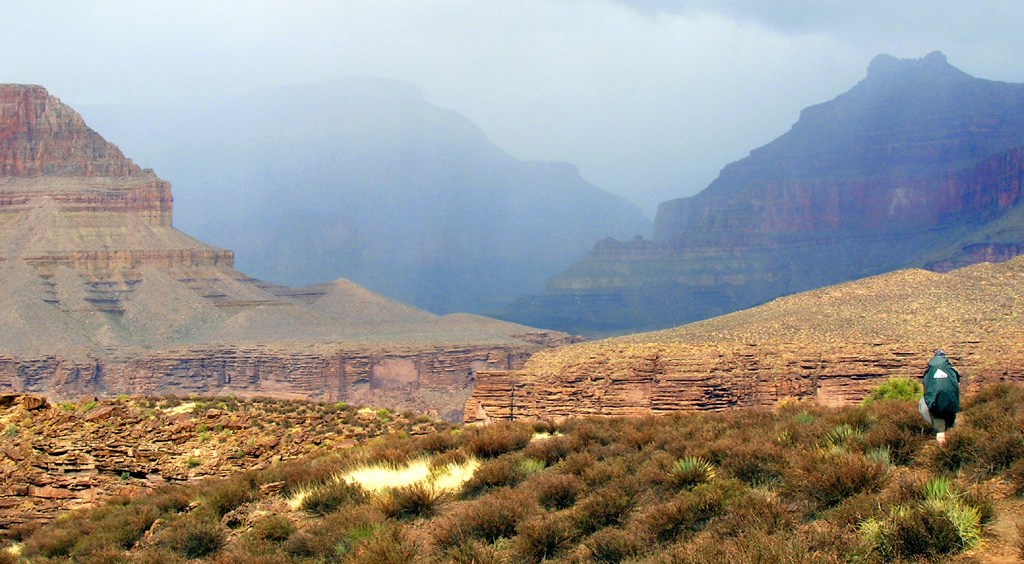 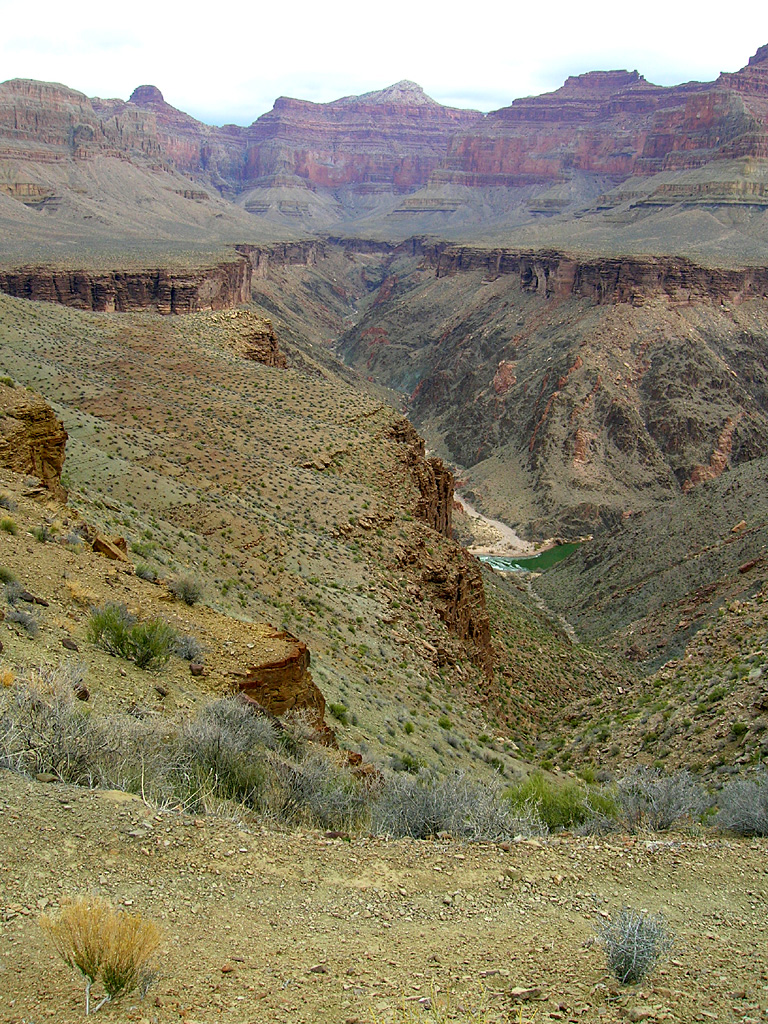 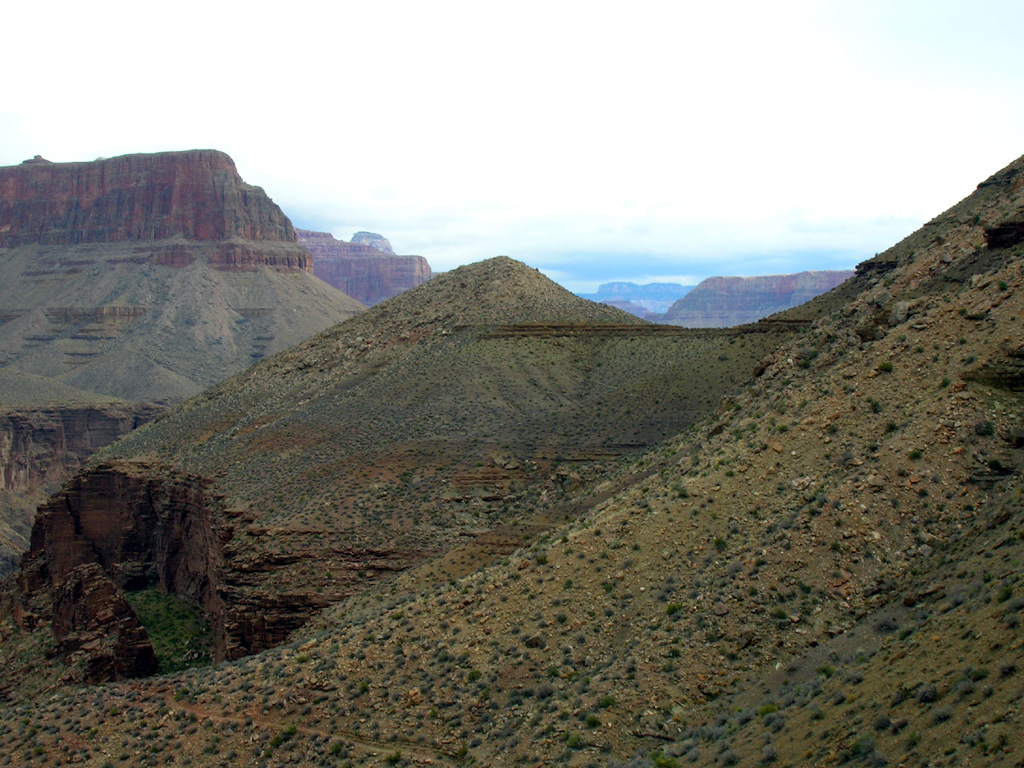 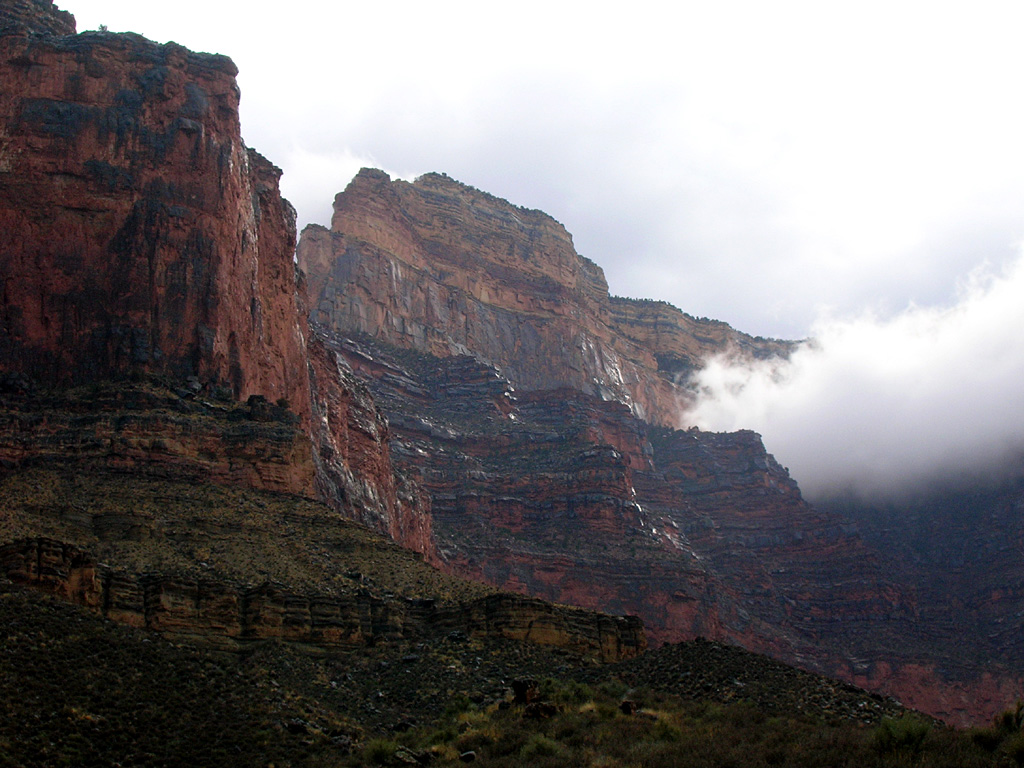 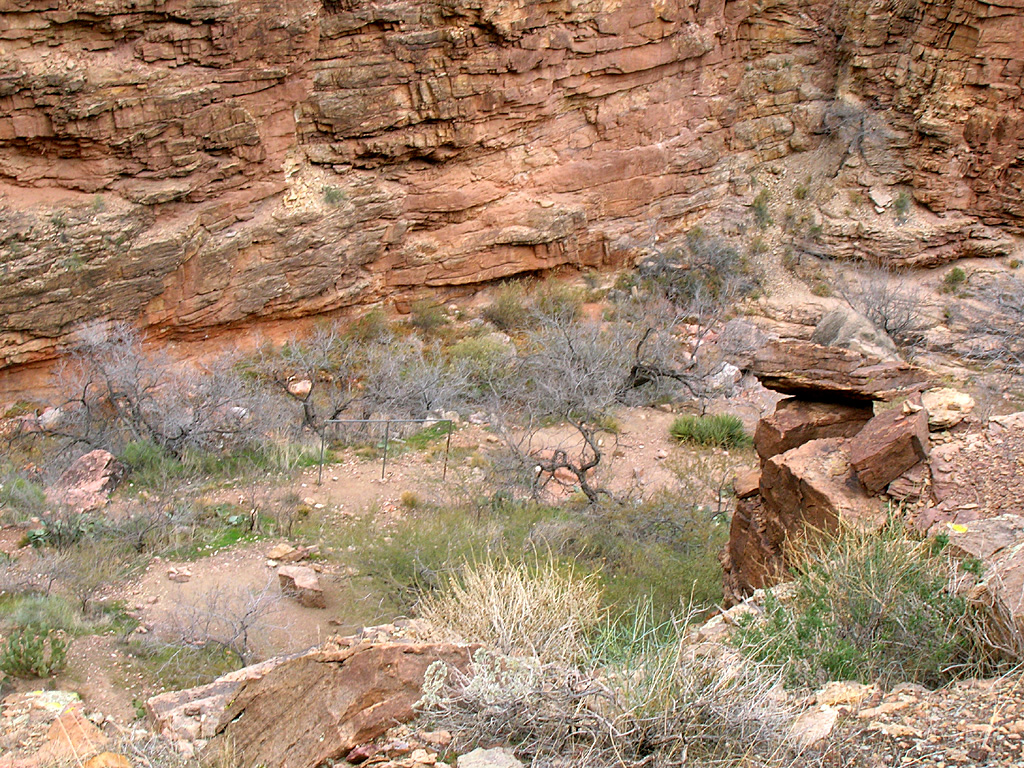 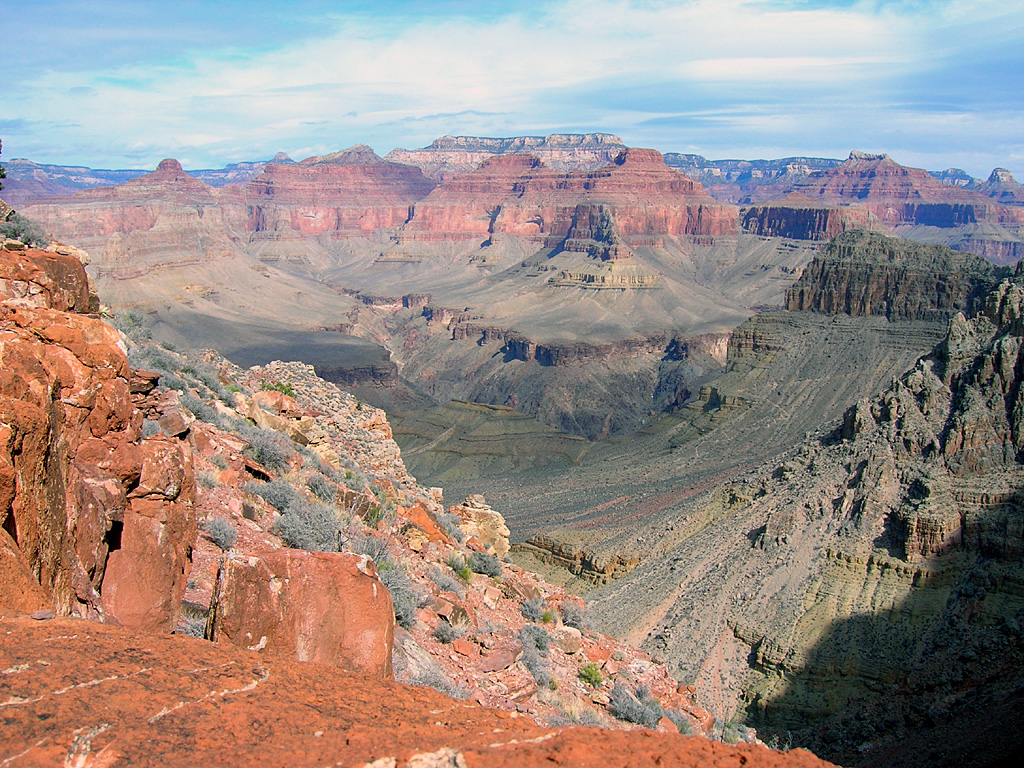 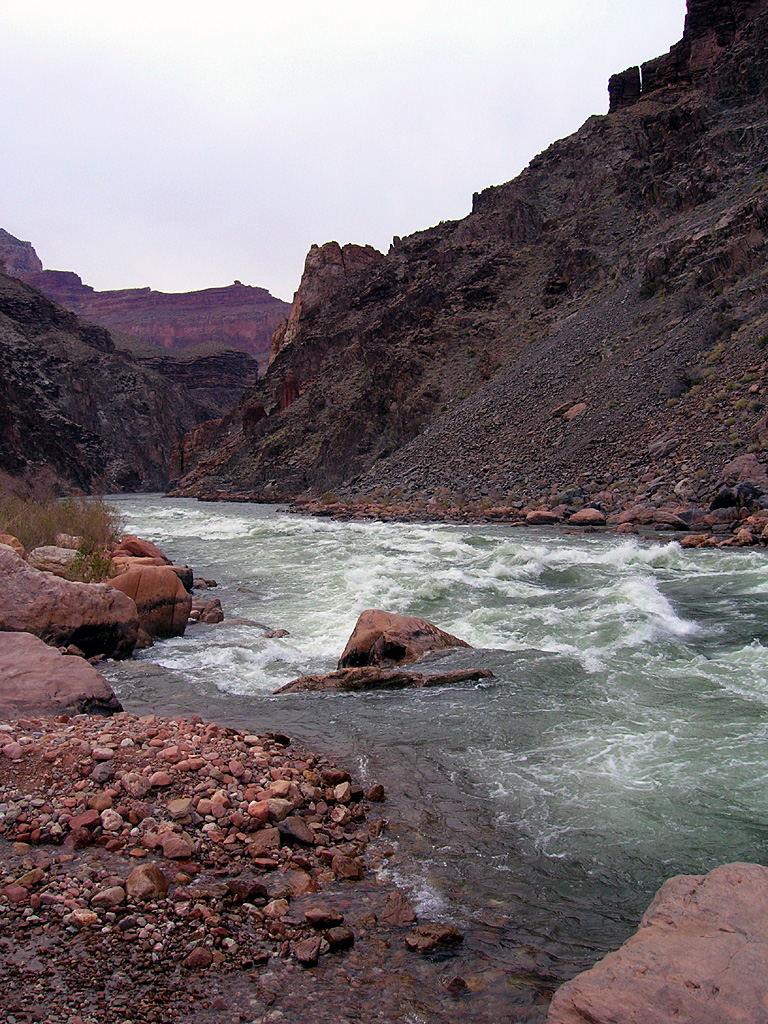 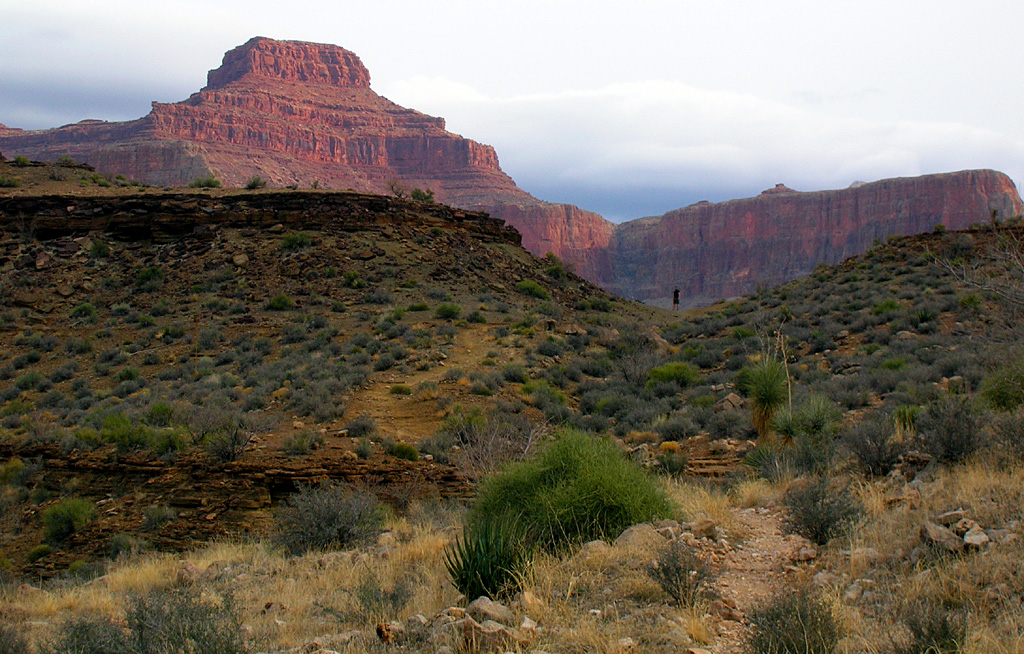 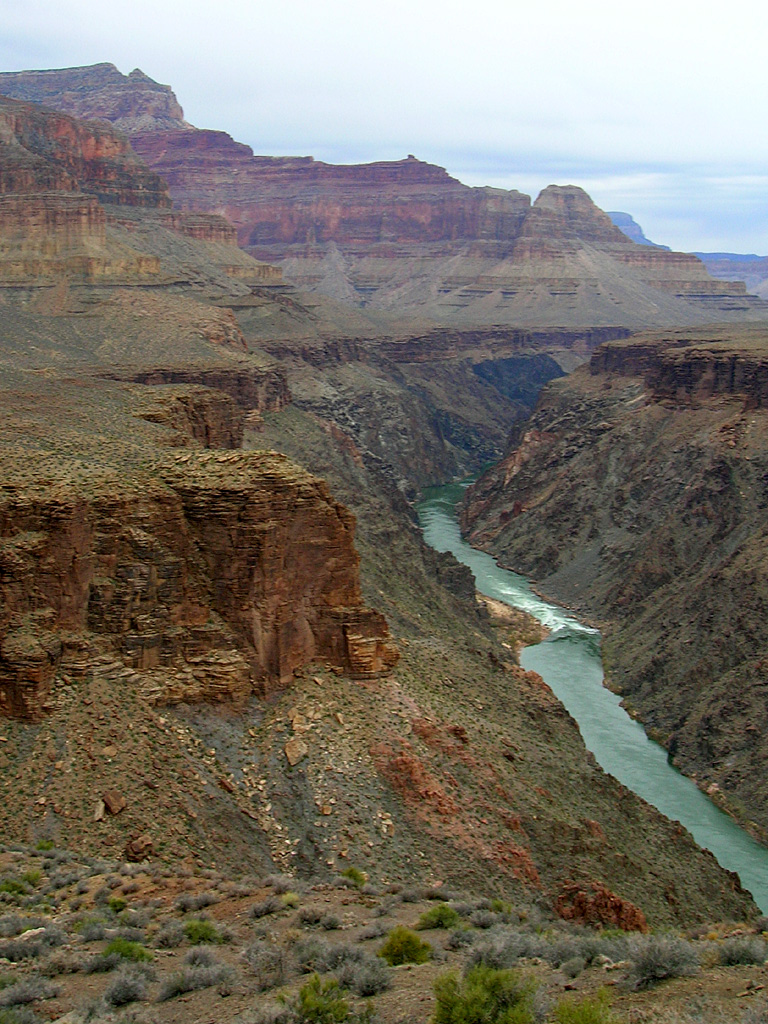 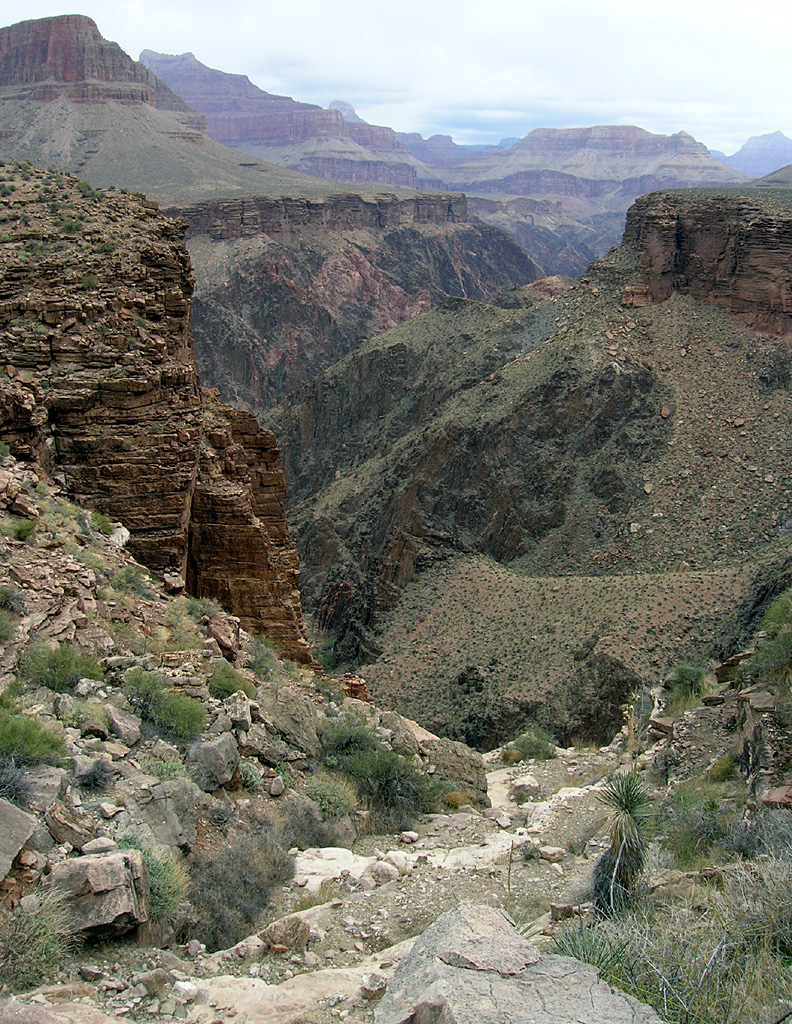 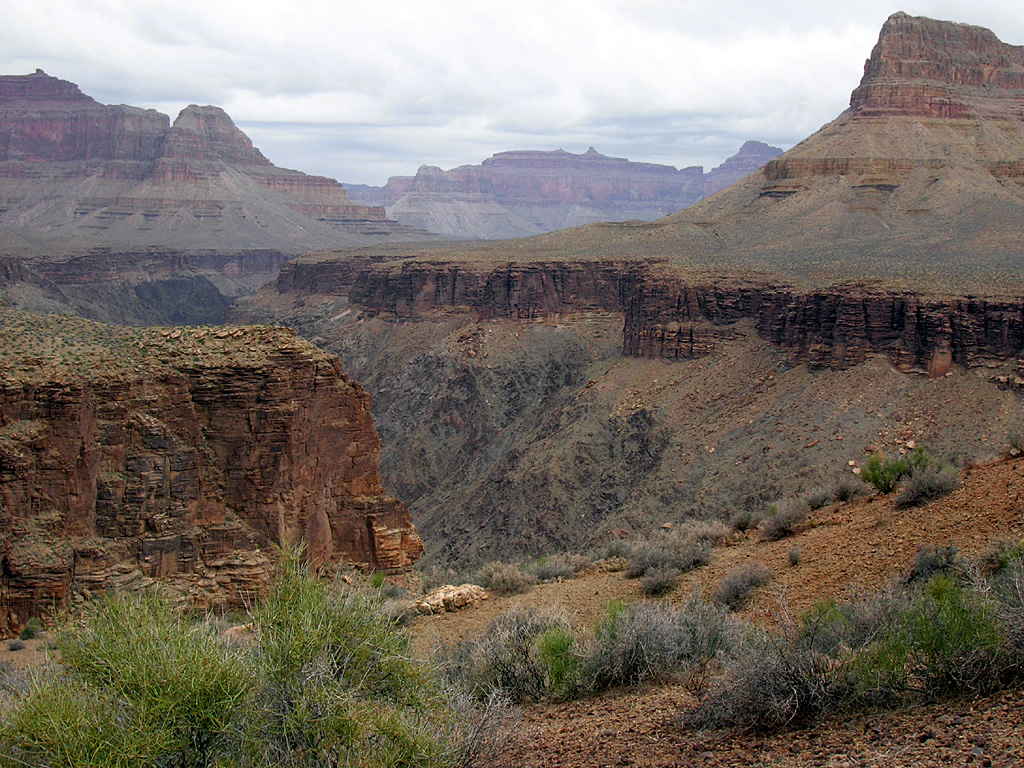 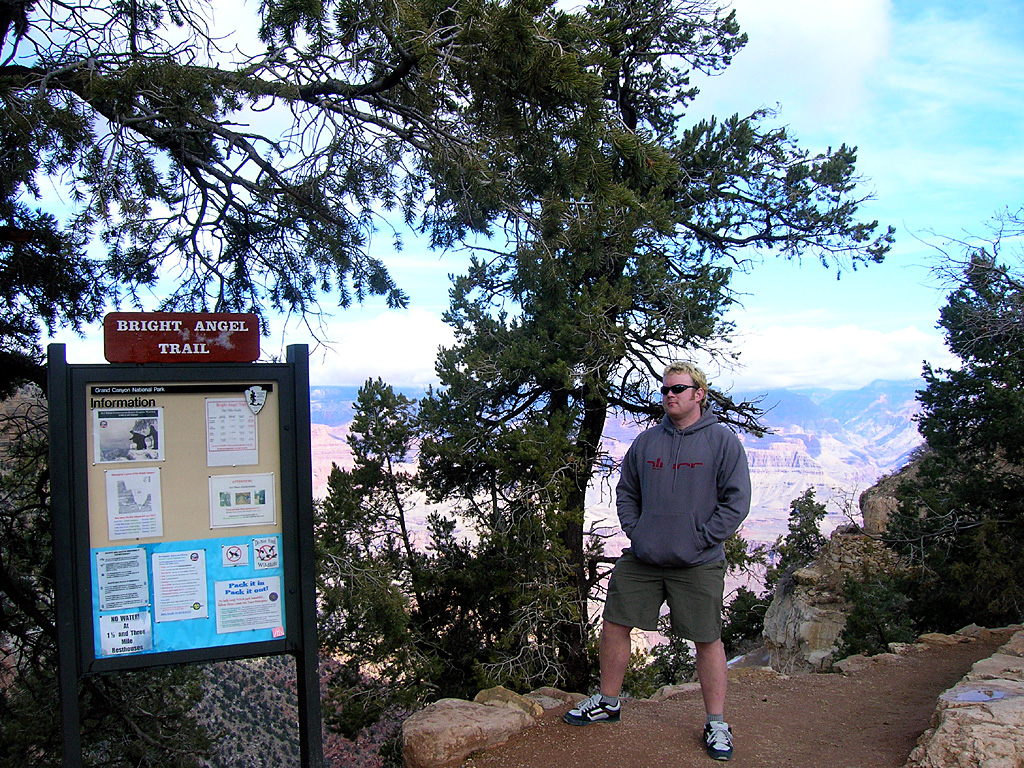 The Tonto Trail has started interesting me lately, so I picked the obvious choice for an introductory hike and that was the section between the Hermit Trail and the Bright Angel Trail. The weather forecast was sketchy, but it was going to be warmer in the canyon than it was at home, and that’s enough to get me going.

I picked up a North Face ultralight solo tent on the cheap in SLC and kept heading South to Page, AZ for the night. It always amazes me just how long it takes to get anywhere after leaving I-15 for either Rim, or Lake Powell. After 7 hours I think to myself, I could’ve driven past Vegas and been in California by now, but I’m still in Utah. Since I hadn’t had any caffeine, guarana, or any other stimulant, and no high fructose corn syrup, or trans-fats in any significant quantities, the energy drinks and road trip food just made me sick to my stomach, and I was too wired to get any sleep, so I left Page before the sun was even close to coming up over the horizon and headed back towards the Grand Canyon.

There was plenty of snow on top, but none on the trail. The Hermits Trail starts out gradually dropping into the canyon, and then kind of levels off as you approach Lookout Point where you’re standing directly above the Hermit Creek Campground, even though you can’t see it from your vantage point on the trail. From Lookout Point you get a nice view of where the trail goes around to Breezy Point, and after that it disappears into the Cathedral Staircase area, and re-emerges as it switchbacks to the Tonto Platform and joins up with the Tonto Trail.

After doing the Thunder River-Deer Creek Loop, the Hermit Trail seemed to be in awesome condition. Trail washouts, route finding, steep descents – it’s all just another hike in the park now. After getting down to the Tonto Trail, just looking back up through the entire area you went through seems unreal because it’s some pretty gnarly looking terrain.

From there it’s a mile to Hermit Creek (in the opposite direction we’re headed the next day) and it’s an easy mile, slightly downhill, on a decidedly better trail than Hermit. One of the first things you see as the campground by the creek comes into view is the overhead view of the dehydrating toilet. I just figured privacy isn’t a concern out here, or they just don’t expect heavy enough traffic for it to matter.

The campground does have some poles to hang your packs on, but there’s some friendly graffiti beta on the wall of the toilet that says the squirrels can easily climb the poles. I didn’t see that till the next day, but I only saw two squirrels, and they left us alone. There are a few trees spread throughout the site, and a nice cliff overhang for shade. My guide book said the pool below the campsites washed out after a monsoonal flood, but there was a nice pool down there, with a not so picturesque cascading waterfall flowing into it, so I guess it’s back!

Since the river was about a mile away and no trip into the Grand Canyon would be complete without a trip to the Colorado, the hike was on. Going down seemed much worse than going back up. We were focused on finding a trail to lead through much of it because it was all cairned out and there was a well worn trail down there, but doing that was a waste of time.

Hermit Rapids look awesome! They’re supposed to be some of the best ones in the canyon at a class 8 (out of 10 on the GC scale). They really make me want to do a river trip through there now. It takes some really big water to get my adrenaline up.

Heading back up the creek we stayed with the creek until we got to the short narrows section and then followed the trail from there back up to the campsites.

The tent I got although it was lightweight, wasn’t breathable enough even with the mesh perimeter, so it was hot and humid except when a gust of wind rushed through and made it really cold for a little bit.

Next day we had 14-15 miles to cover on the Tonto to get to Indian Gardens. I was expecting a slightly more level trail since the Tonto basically follows a contour line for the most part, but in reality it does a lot of undulating, especially at Monument Creek where you do some serious dropping down and climbing out. It’s a lot of walking. The trail was in good condition and offered some incredible views. Incredible views which I couldn’t capture myself because even though I brought my camera, the memory card wasn’t in it, which was a big bummer, but there will be photos because Brittany is letting me use hers!

There were light sprinkles, brief moments of sunshine, and two torrential downpours. The first one came after the lunch stop and I was freezing since I hadn’t been moving to keep my core temp up, and the second one came ten minutes before I got into Indian Gardens where we were greeted with covered picnic tables.

The nighttime lows were supposed to be pretty good, but with the rainstorms pushing the cold air from the rim down through that campground, it was cold. The poor breathability of the tent created it’s own little storm inside the tent with rainshowers anytime I touched the wall. Basically most everything got soaked, and the prospect of facing a cold, wet exit to chilly morning air was a really hard thing to face.

The climb out of the canyon was the best ever! I made it out in 2:20. Since I don’t have any other starts from Indian Gardens to compare it to, I’ll just say that was pretty good. 4:45 was my best time out from Bright Angel Campground, so I think it’s pretty good.