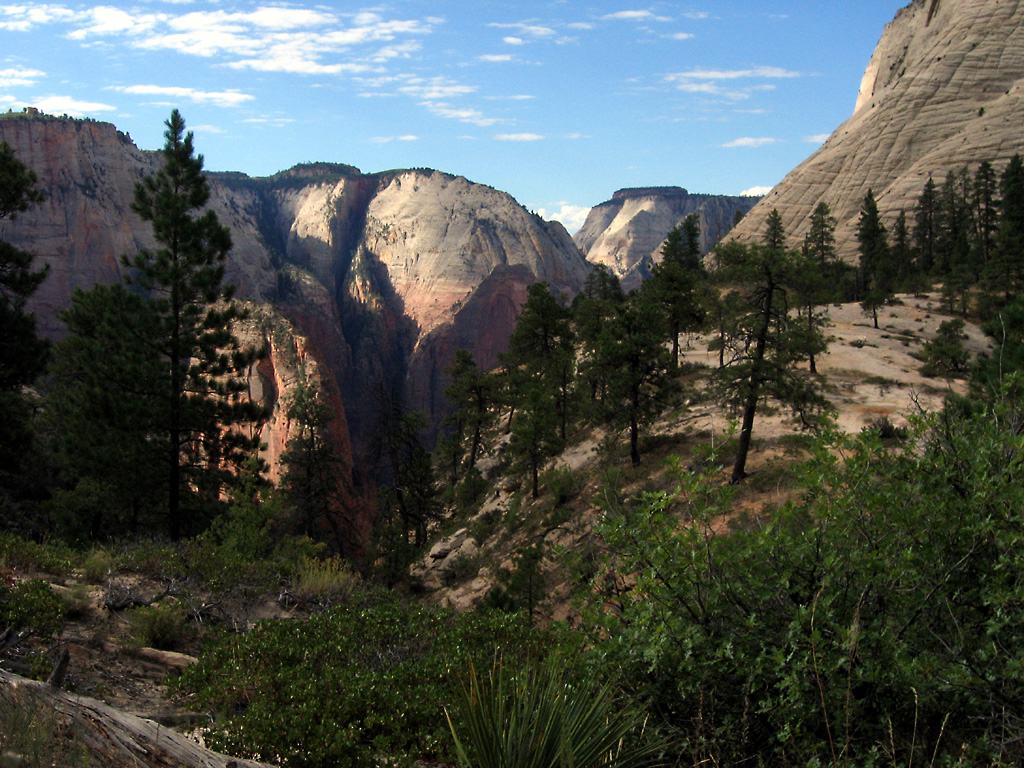 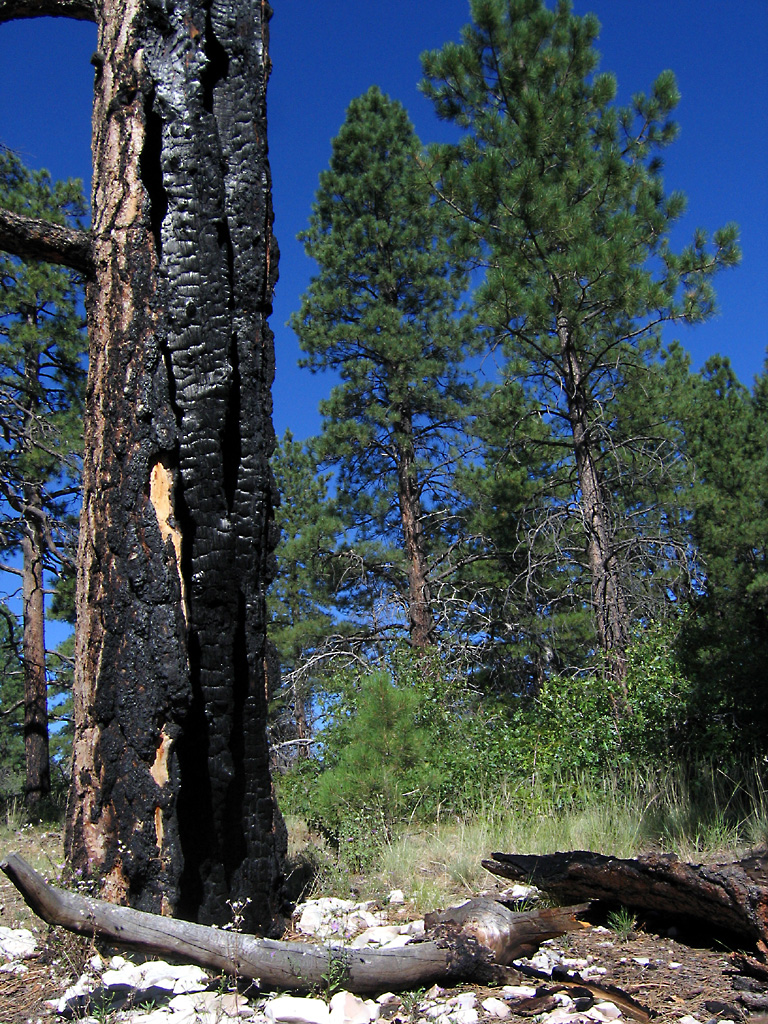 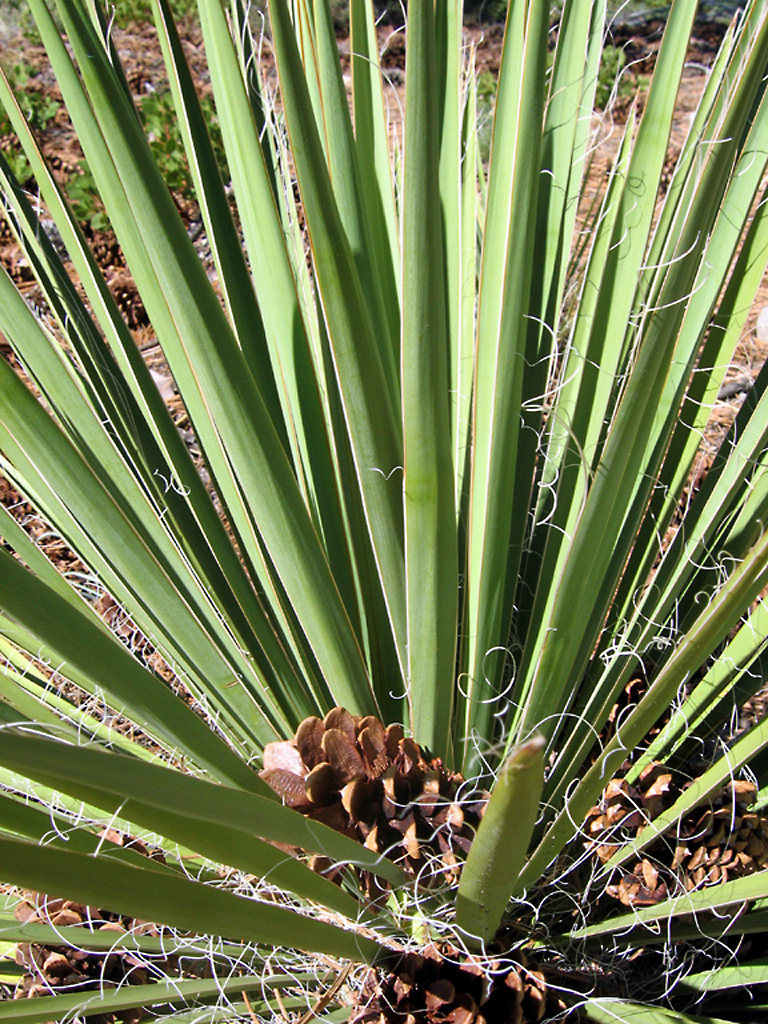 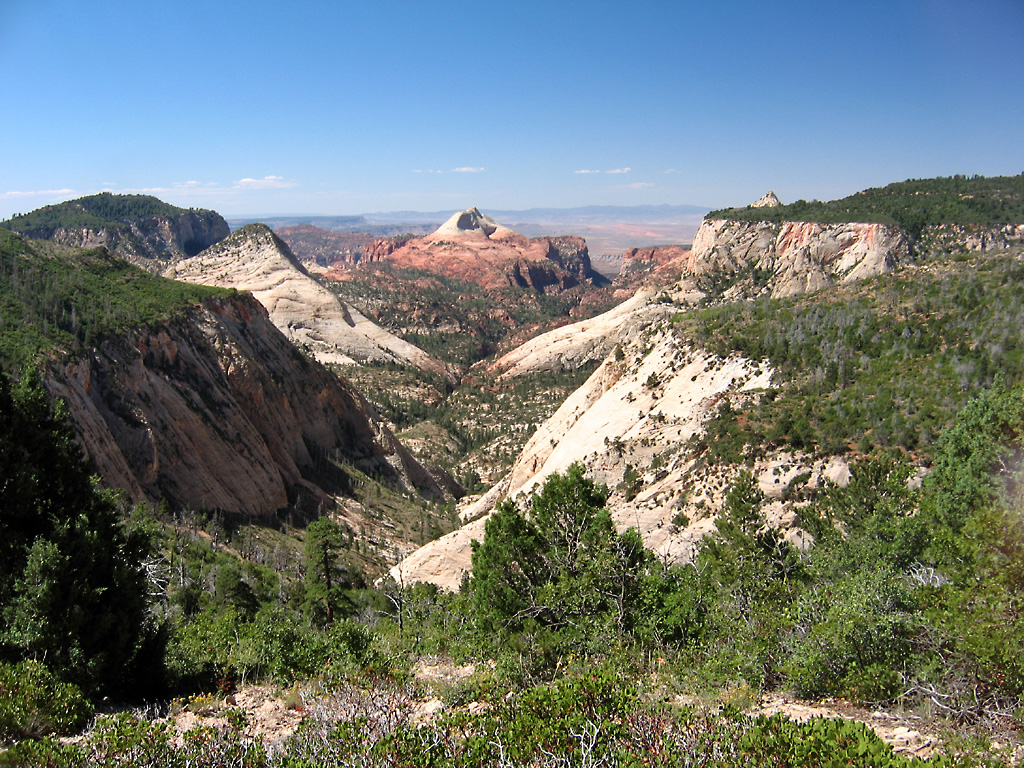 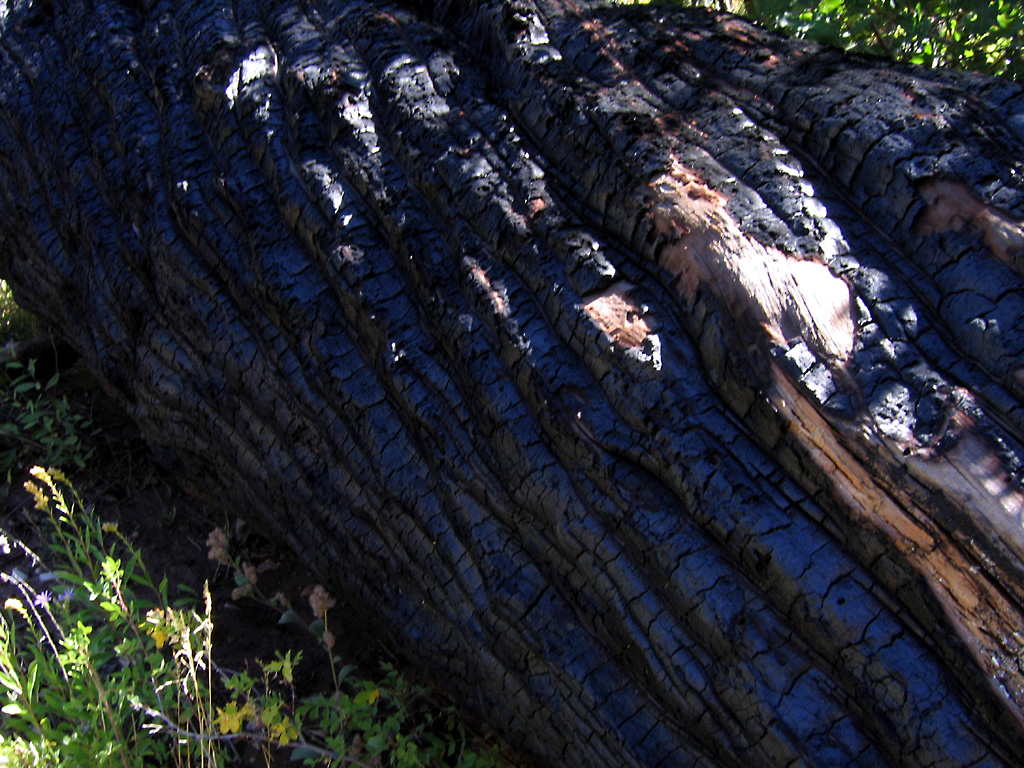 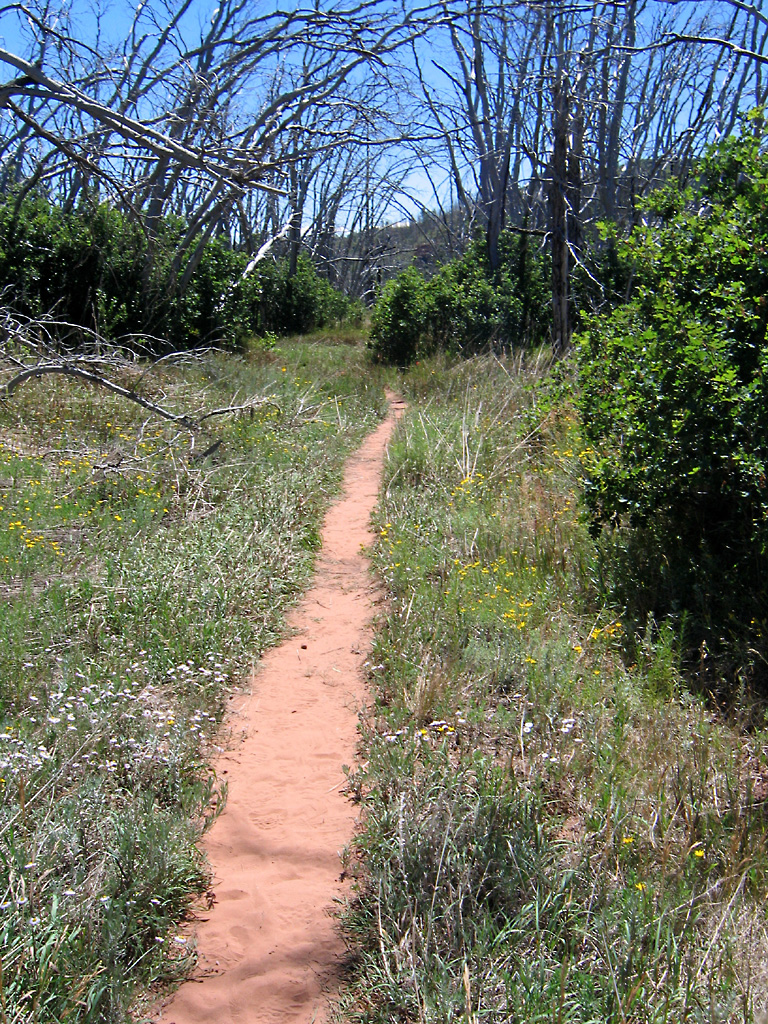 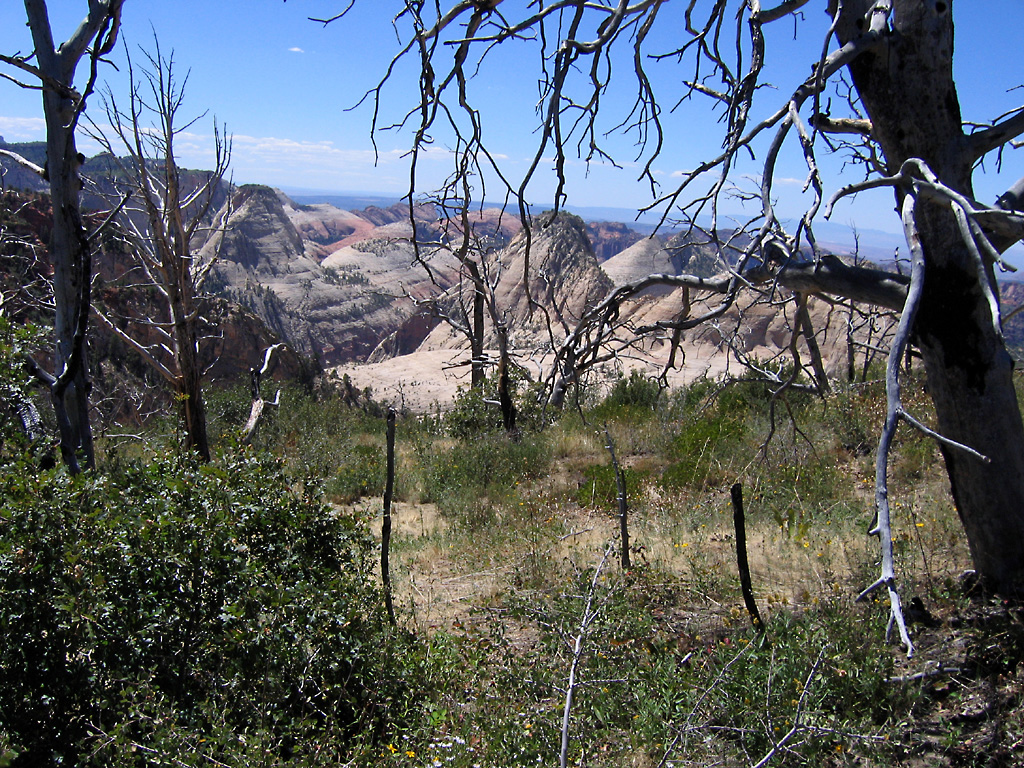 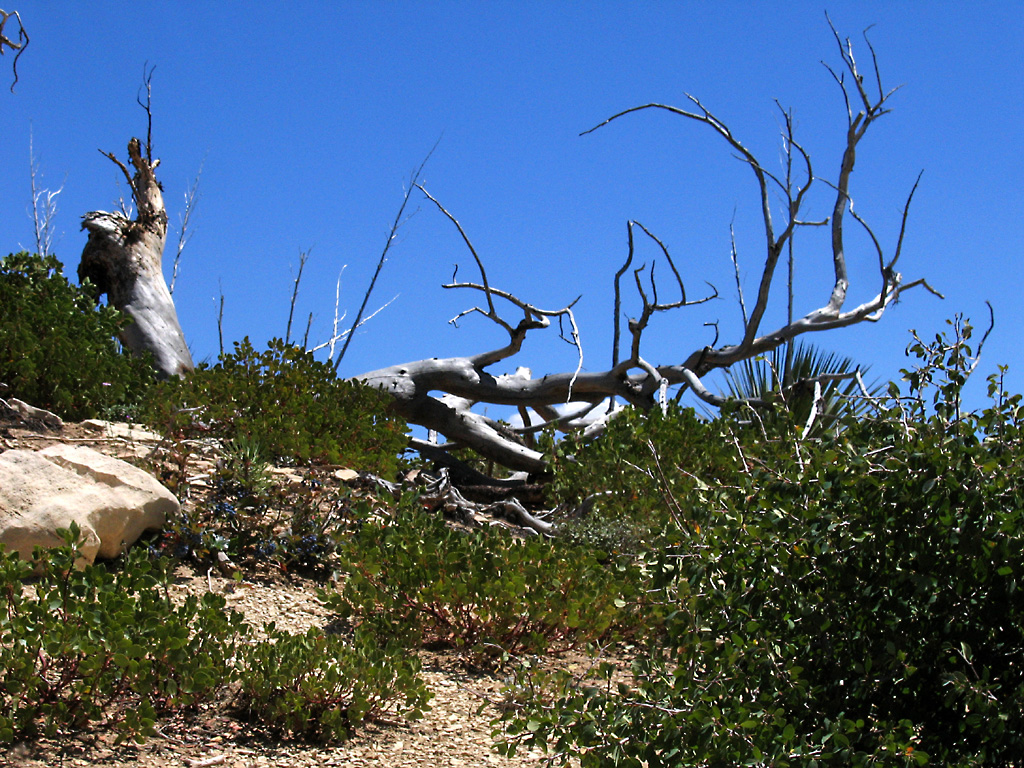 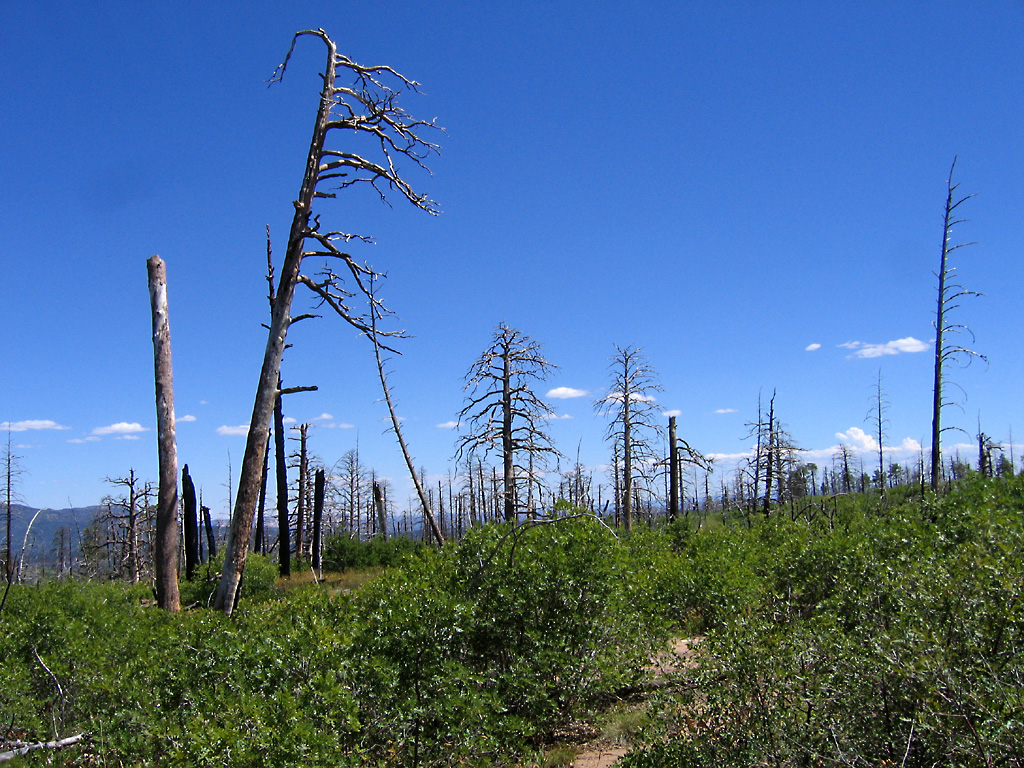 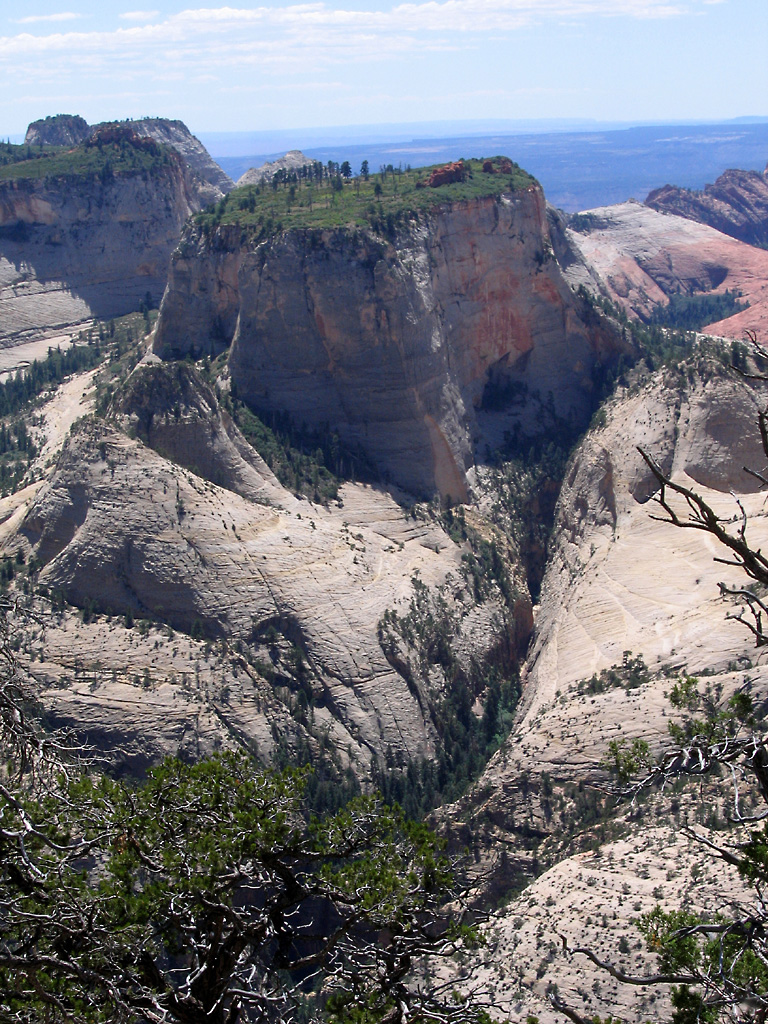 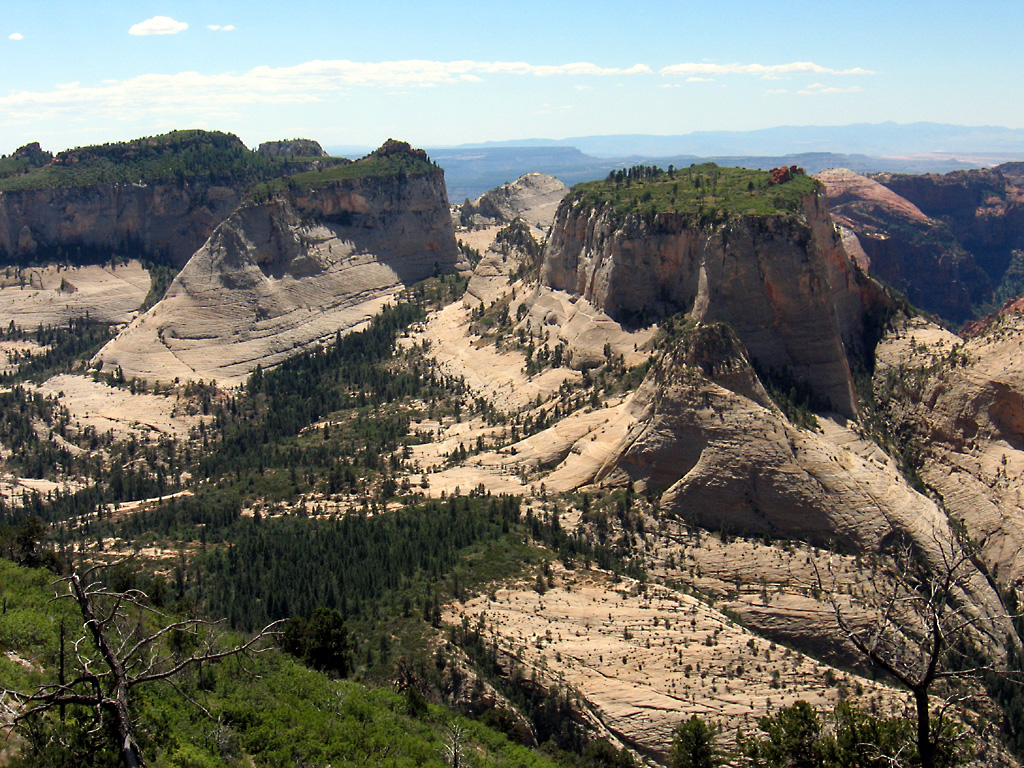 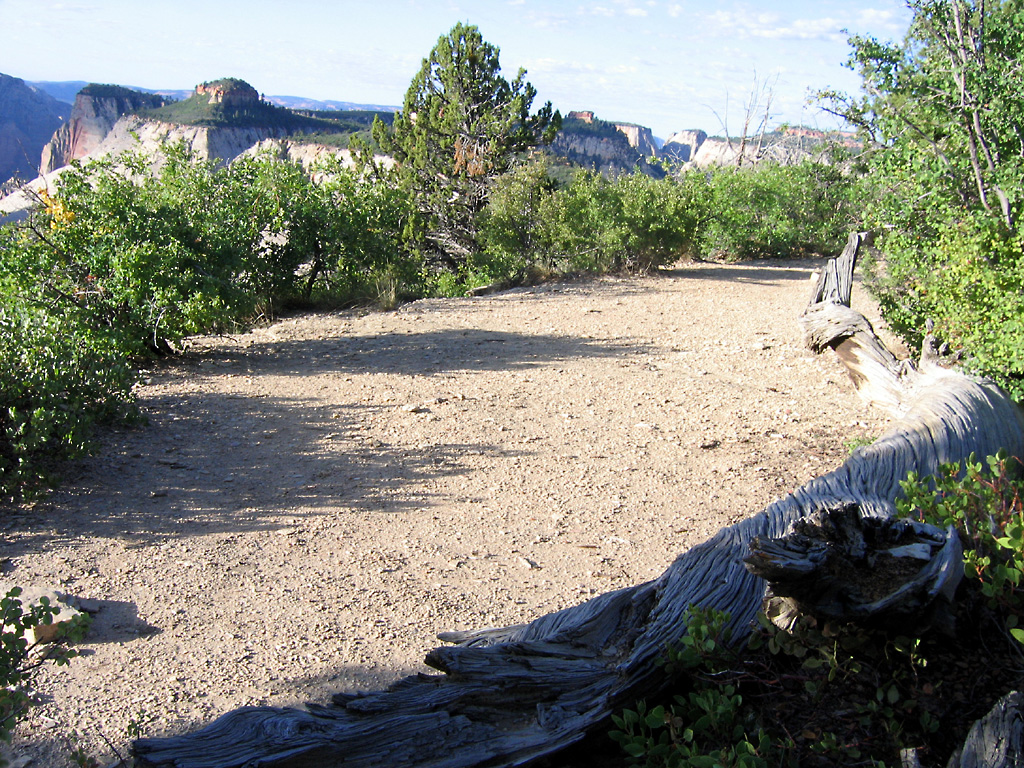 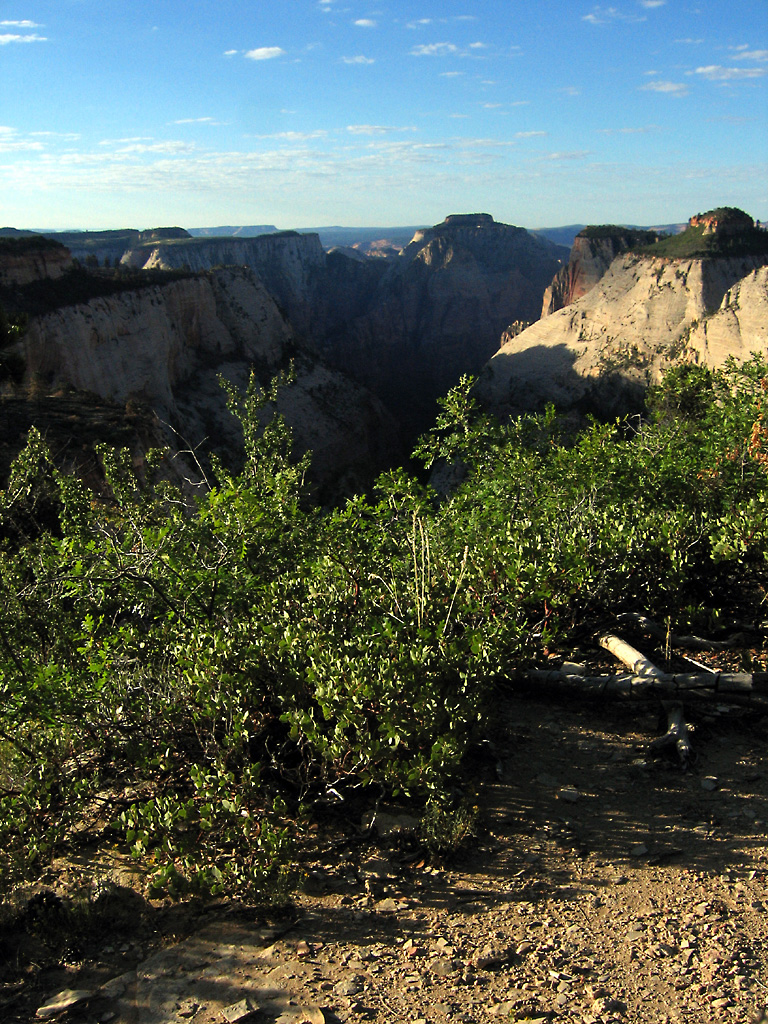 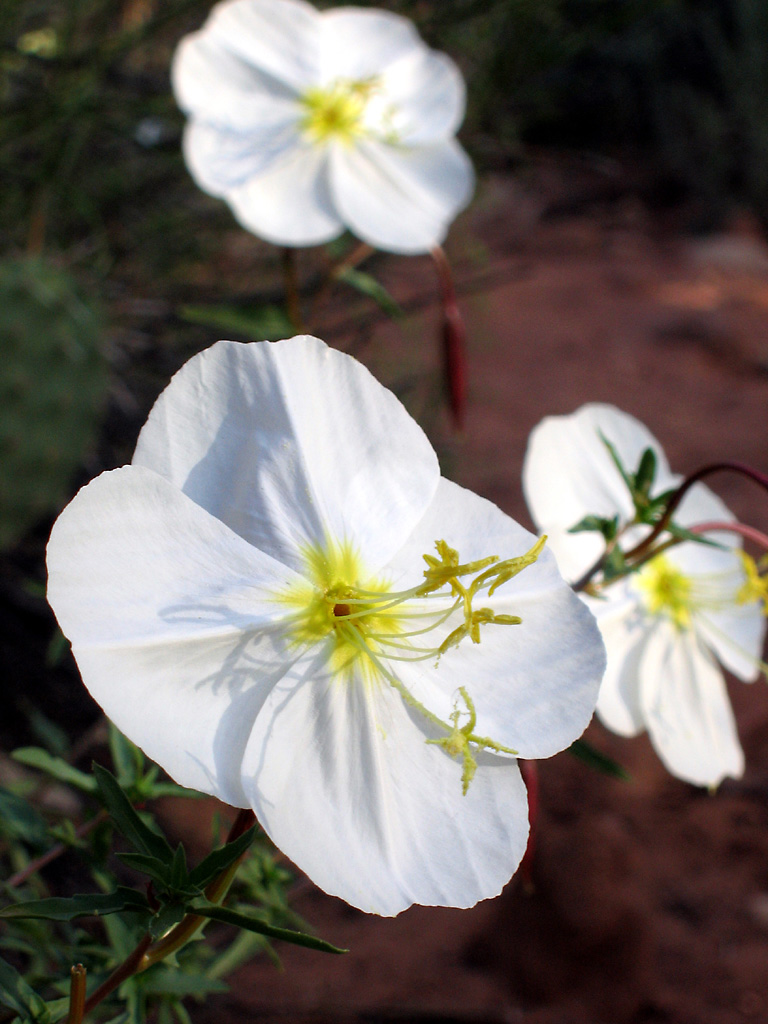 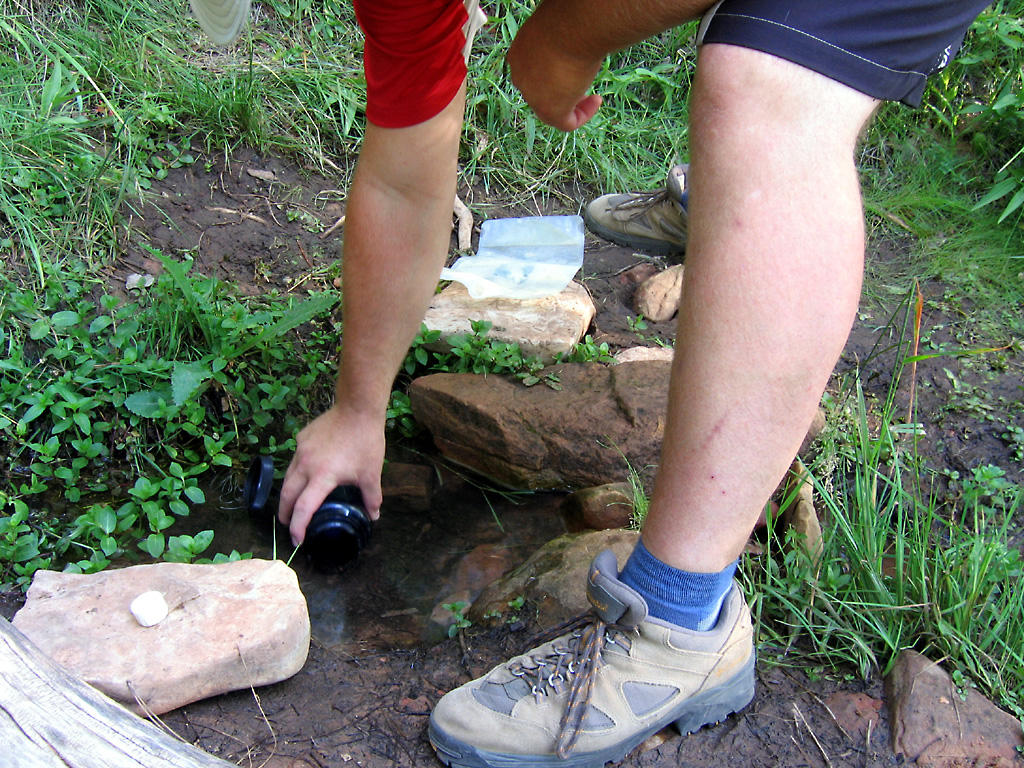 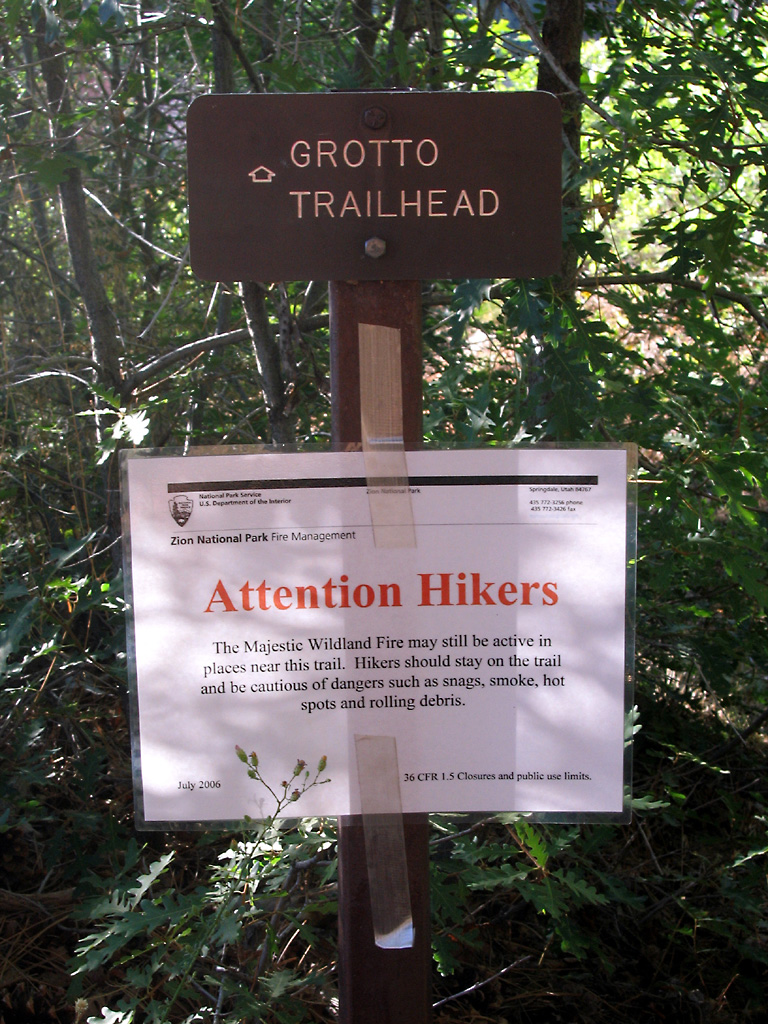 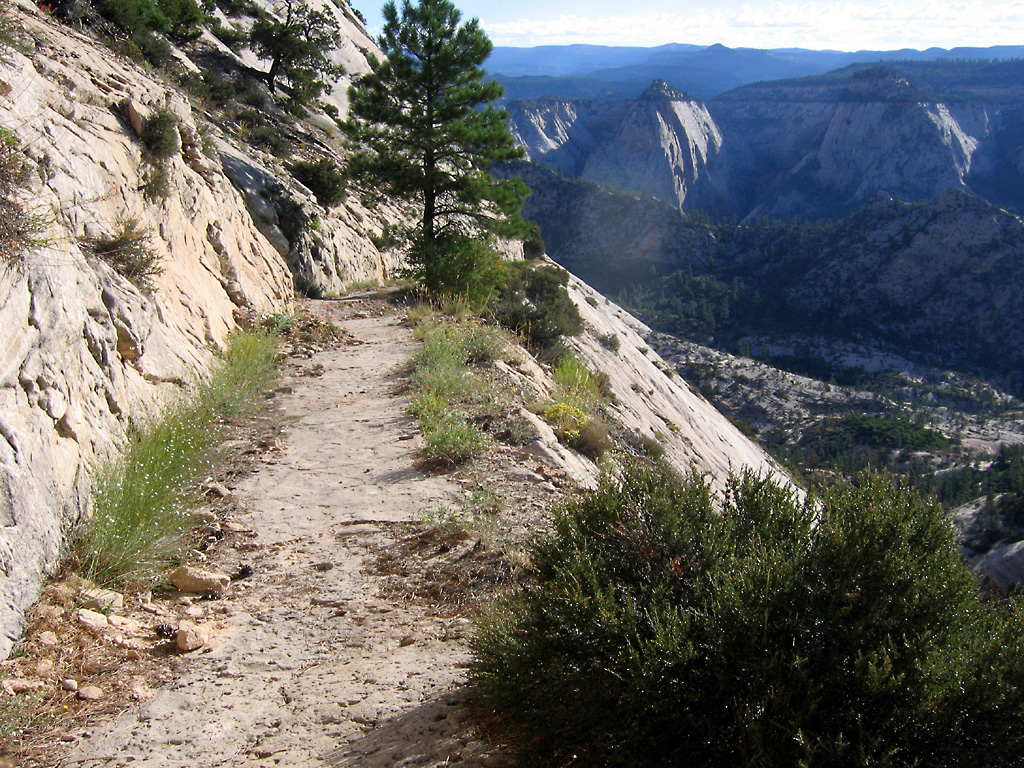 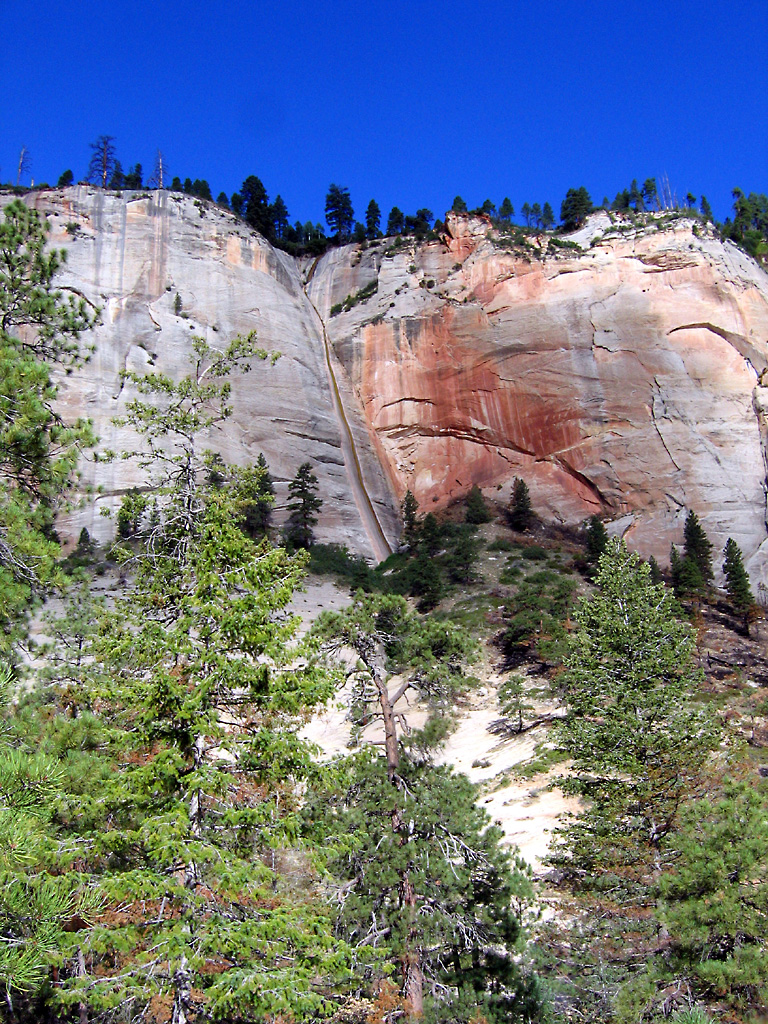 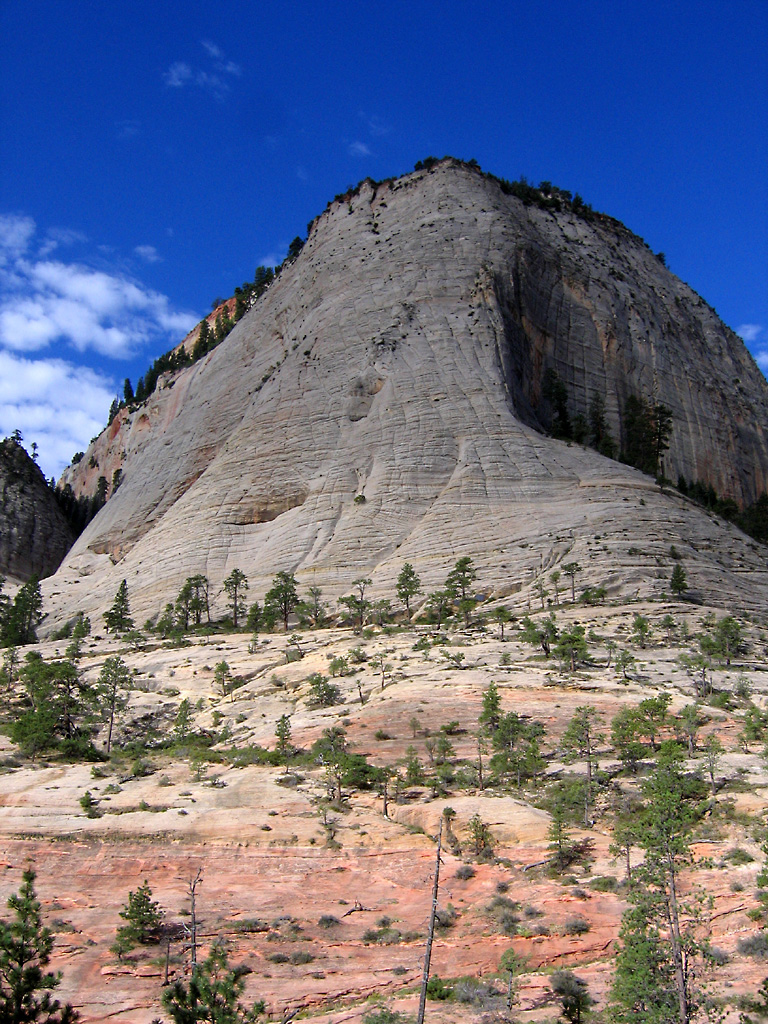 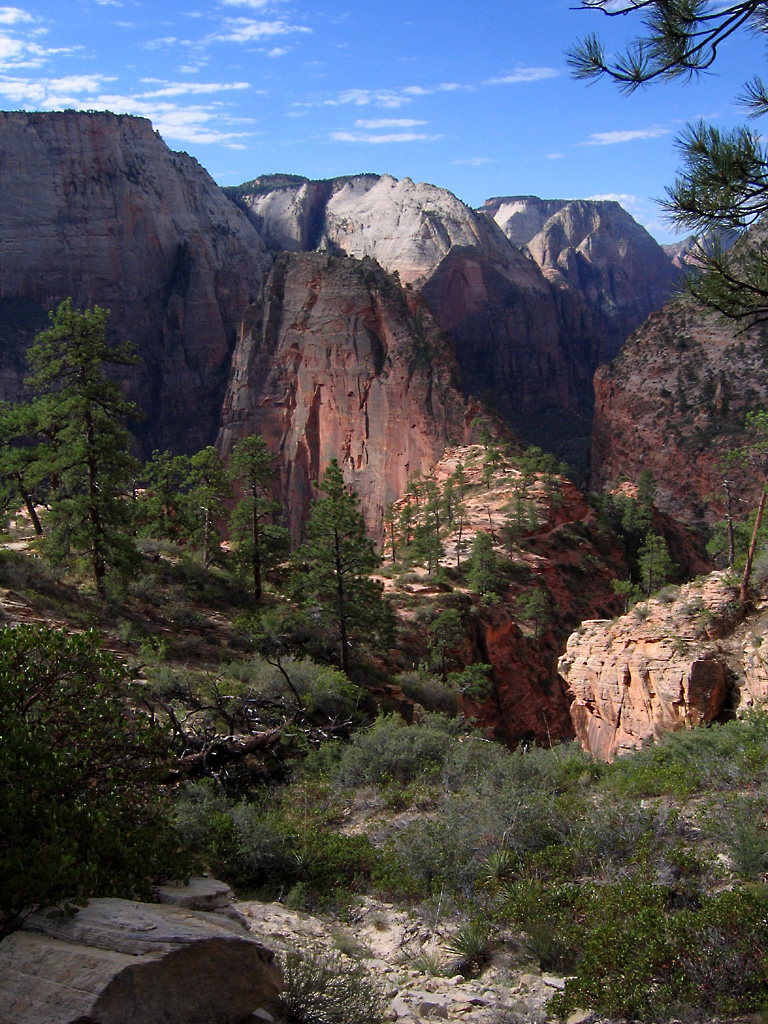 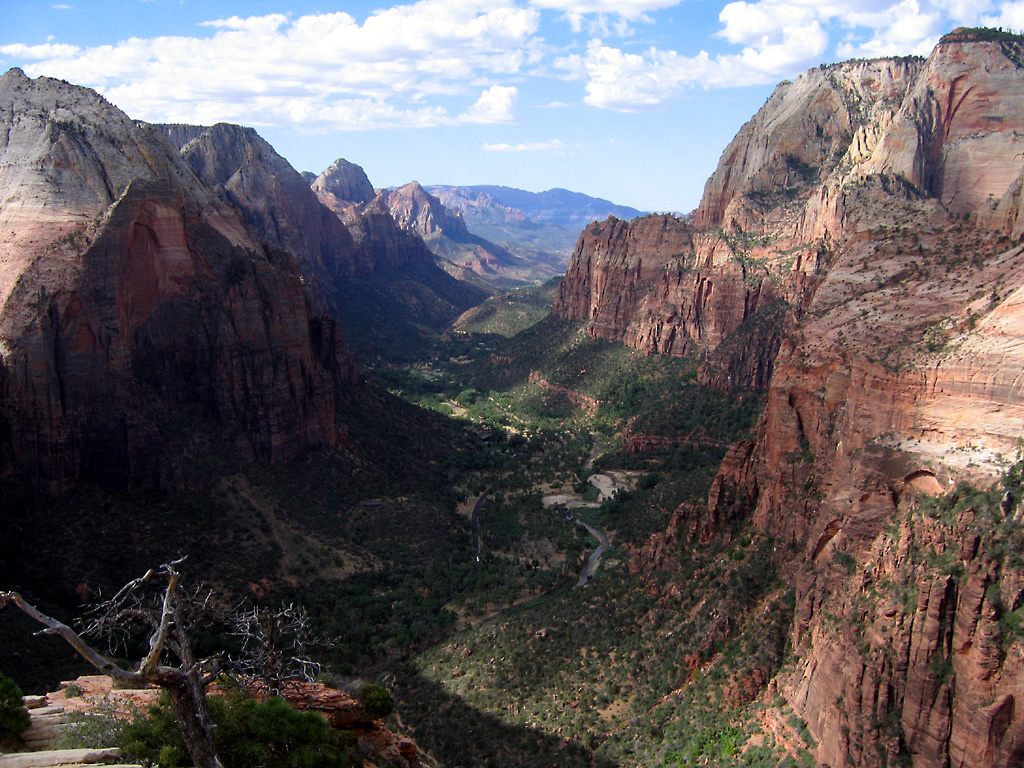 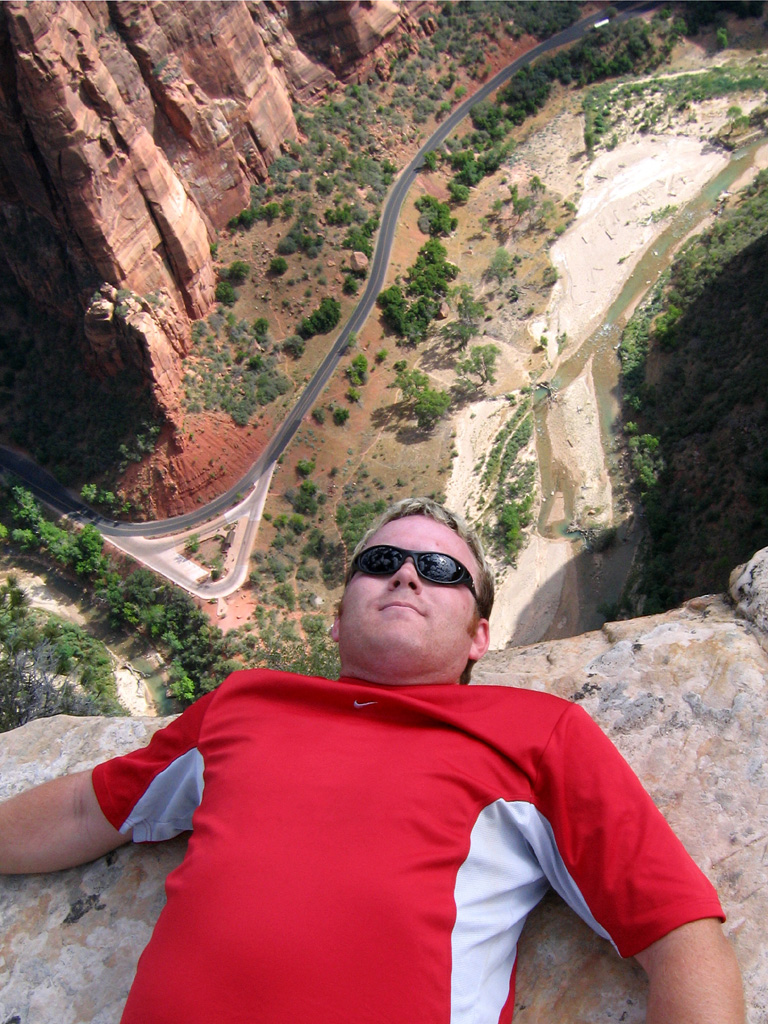 I was half expecting the West Rim Trail to be nice and mellow more the first 9 miles and then just wind down some cliffs and drop in elevation down to the Virgin River, but it’s not so. Sure it starts out all nice and mellow, gradually dropping in elevation with some mellow rises up and over hills. The ponderosa pines mingle with prickly pear cactus and yucca to make for some interesting scenery. Even more dramatic though is the varying stages of destruction and recovery from numerous wildfires over the years. Some pines would be completely consumed while its neighbor was left unscathed. The cactus seemed to be the least affected by fire since they lay so low to the ground.

The first remarkable stop is at the three mile mark where you have a nice overlook of the infamous Subway. Someday I’ll get around to doing it. After that stop you drop down some significant elevation in to Potato Hollow where the fires left only skeletons of large trees that once shrouded the trail in a green canopy. Now they reach out, attempting to snare the travellers who pass in their midst. This area is mostly covered in grasses, and some willow type things that cause my skin to itch. There’s a spring in that area that I didn’t visit, but I heard that it’s full of green, slimey goodness.

From Potato Hollow you climb way up over the ridge. And this is when you realize the trail isn’t gonna play nice. After several breaks you crest the ridge and get a great view of numerous canyons on the West side of the rim and you drop into Sleepy Hollow. No sooner do you reach the bottom and are awarded with great views, do you subcomb to the drudgery of climbing an even steeper trail to an even higher elevation than the ridge you just crossed.

Once up there the trail splits and most of the campsites in that area are only reachable from the Canyon Rim section. It’s up here that you get to see the most dramatic and extensive layout of canyons that the West Rim Trail has to show. This section gradually climbs upward, but very gradually. The landscape to the East was completely obliterated by a wildfire. The designated campsites in this area are in small patches of pines that weren’t affected by the fire.

We had campsite #4. It doesn’t have any views from the Rim, but they’re a short walk away. I set up my hammock in the trees and napped for a while. The mosquitoes hit hard that night, but the bats came out to feast on those blood suckers. There were several meteors that burned up in the sky while I was still awake to see them.

Next morning we saw the very different views that the South side of the West Rim Trail has to offer. After winding around the rim to Cabin Spring, I stopped to get some water to treat. Cabin Spring is nothing more than a very small trickle with a little pool big enough to fill a Nalgene bottle. There are two campsites right there with enviable views of Majestic Mountain, and the canyons to the South and East a short walk away.

It’s at this point the trail starts dropping down a trail cut into the sandstone cliff opposite of Majestic Mountain. Eventually you cross over to the Majestic Mountain side, drop some more, and cross a bridge traversing a deep drainage. Unfortunately the trail climbs again, but only for a short while. Once at the top you can look down into the depths of Zion and see the trees surrounding the Virgin River beyond Walter’s Wiggles, and Angel’s Landing. Then it’s a short trip to Scout’s Lookout, and the obligatory jaunt up Angel’s Landing just because it’s right there and it’d be a shame not to do it. The rest of the way is on the paved trail down Walter’s Wiggles, through Refrigerator Canyon, down the hot switchbacks, along the edge of the Virgin River, till you get to the bridge which drops you off at the Grotto.

The Virgin River was really, really nice to cool off in and wash off the dirt & stank of the trip.