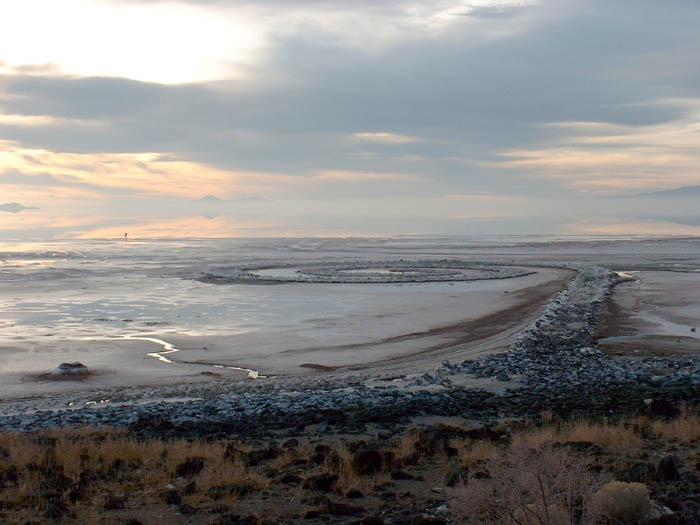 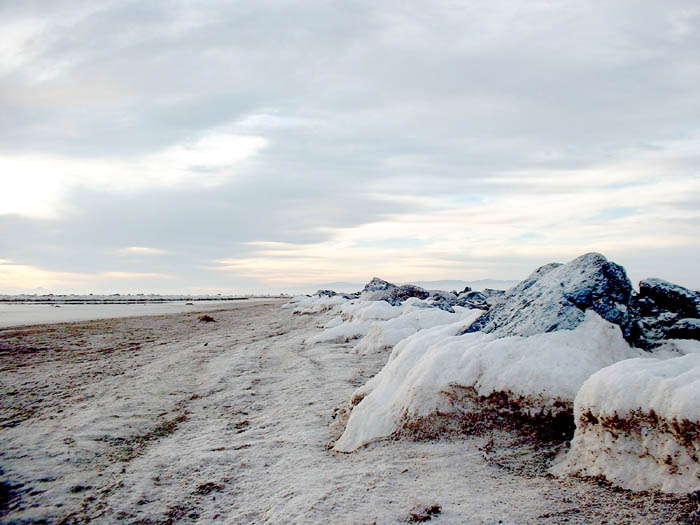 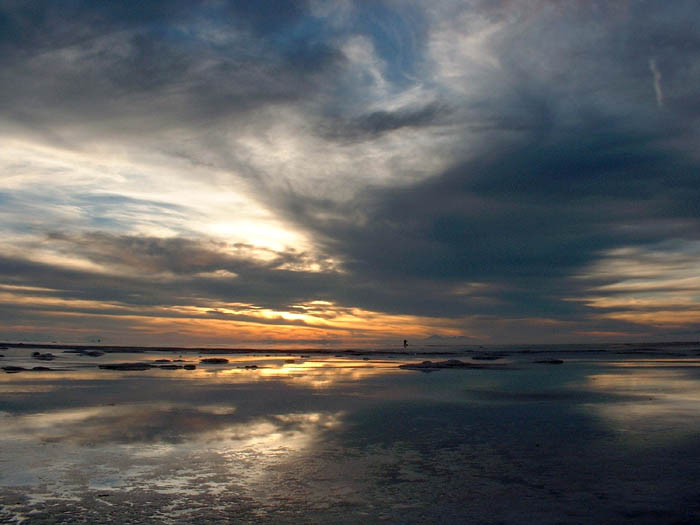 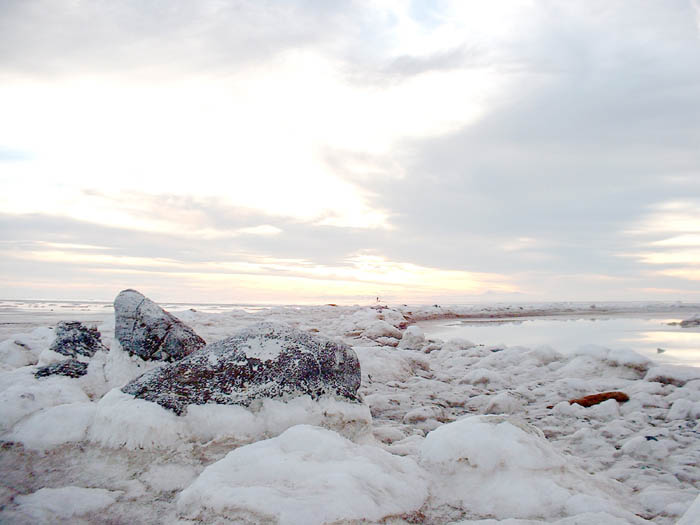 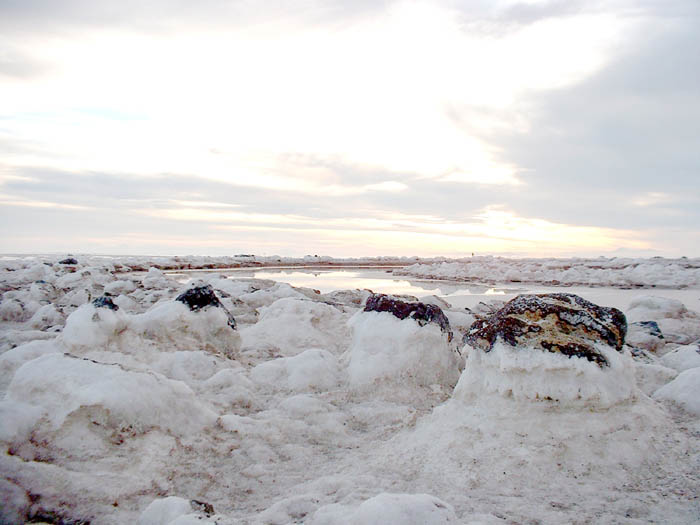 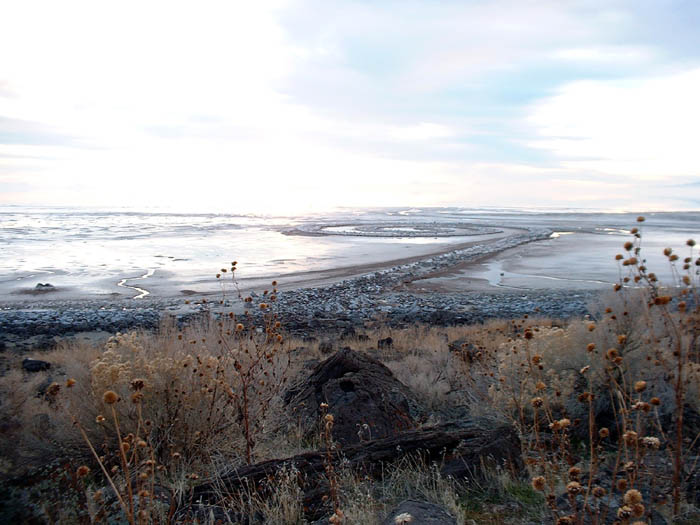 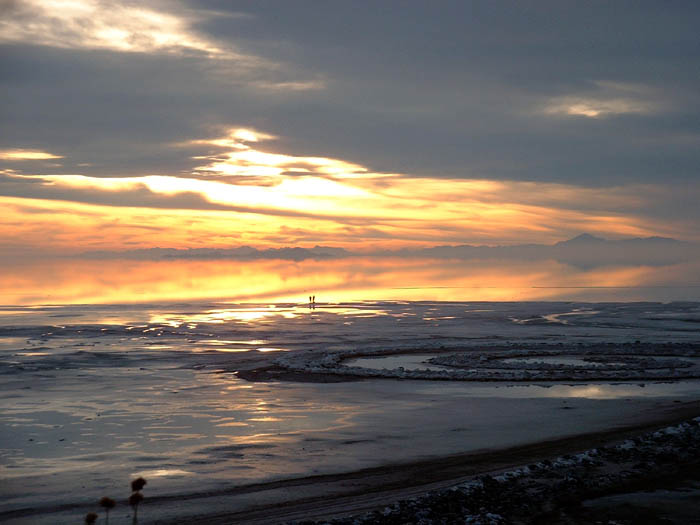 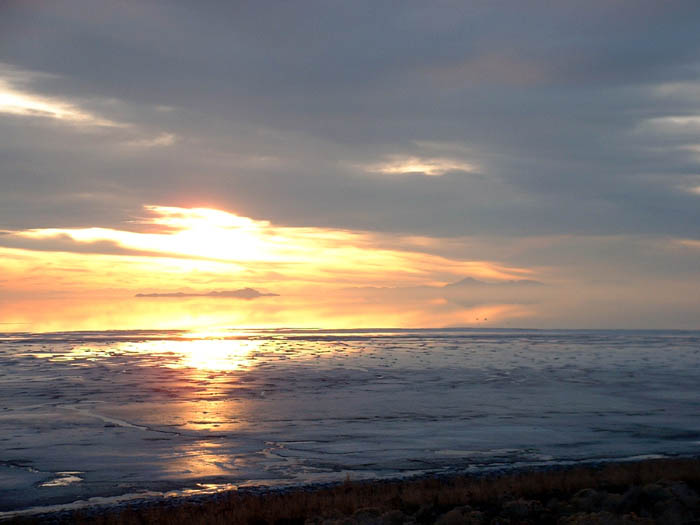 It got up into the 50’s today so I wanted to get out and explore my new area a bit. I’ve been wanting to go and check out Promontory Point for a long time, and just can’t seem to get out there. There’s basically no easy way. There is a rail line that goes over the Great Salt Lake from 12th Street straight to the tip of Promontory Point, and then continues over the Great Salt Lake and on into the West Desert, but the furthest access point is full of private property threats, so I decided to go the long way to see if I could get out there. This entails driving 20 miles North, then 20 Miles West, and then South 20 miles to get to the point, basically driving around all the wetlands & lake. I got off the wrong exit, and wound up in the middle of the Bear River Wildlife Refuge, which was an interesting drive, but not where I wanted to go. Eventually I was out there, driving down the peninsula, and I could see the lake about 1/4 mile away from the road, however all the land was private and behind barbed wires. Halfway down the peninsula that is Promontory Point you hit a point in the road where you’re greeted with that private property stuff all over again — at least this one has a sign w/ a number to call & get a permit to go down there for recreational purposes. So I was at a loss for what to do. I wanted to get to see the lake. I’ve tried many times, but it’s surrounded by mile after mile of private property, and lack of roads to access it. The only place I did know of was Antelope Island, but you have to pay to drive out there.

I decided to head out towards the Golden Spike National Historic whatever and see if I could get to the lake from the other side of the peninsula. On the way there I saw someone w/ a loaded backpack hiking down the only dirt road that wasn’t gated so I decided to see if she could give me some ideas of what I should expect where I was headed. She said I could get to the Spiral Jetty which was in the lake if I went to Golden Spike and followed the signs. While turning around my truck’s back end slipped into a ditch, the roads being muddy from the snowmelt. After a couple minutes of trying to get out I had to start thinking of something to do to get out of the ditch when this white SUV comes up the road loaded w/ an entire family. Thanks to this Mike, and his 4 sons I got out in no time — thanks Mike!

The Spiral Jetty is about 15 miles away from the visitor center down dirt roads, for the most part, they’re good dirt roads. They get worse as you go along, and when you’re really close to the jetty, they’re barely wider than my truck, and full of huge rocks, with boulders lining the sides of the road, not a big deal, it’s just really slow going. The jetty is really cool. The lake is low enough the lake starts about 1000 feet away from the jetty, and there’s nothing inbetween except a lot of salt flats. So you hike down to the old lake edge where the salt flats start, and the salt flat is just solid, and dry for the most part. There are some puddles of water here and there, but they’re just shallow, like less than a 0.5 centimeter deep, the cool thing is that they’re just reflecting everything like a mirror. It’s like a huge optical illusion when you’re trying to find the lake’s edge because the salt flat just bleeds into lake’s edge. It was seriously cool to be there. To make it even more memorable there was a guy &mp; a girl there that looked kind of hippie’ish, and seemed kind of stoned, or drunk, doesn’t matter, they were just fun to watch. They had walked out 20 feet into the lake and were playing in the water, it was so shallow it looked like they were walking on it. They were shouting stuff that sounded like it came right out of the X-Files — conspiracies, seeking the truth, bizarre manifestations….I was half expecting to find some people like that out there. All in all, it was freakin’ sweet to go there.