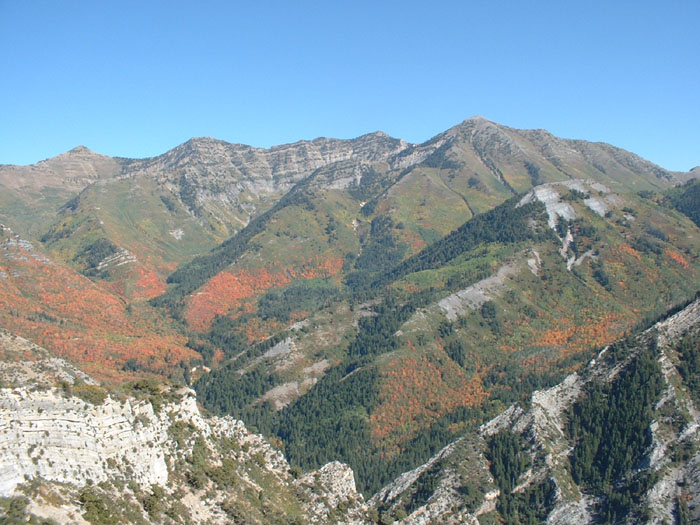 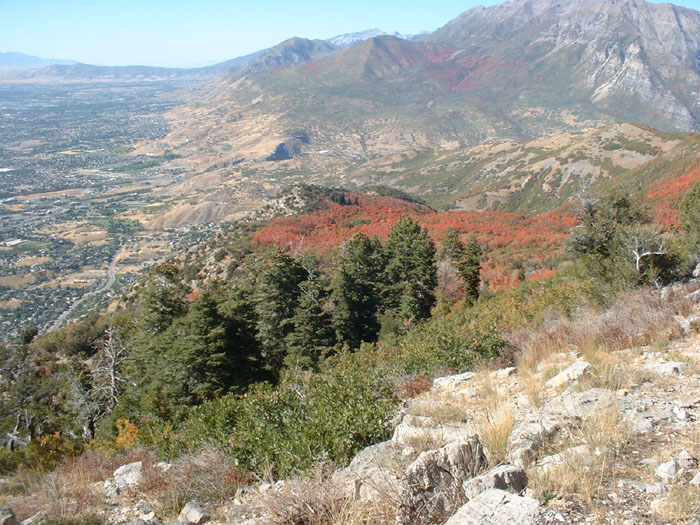 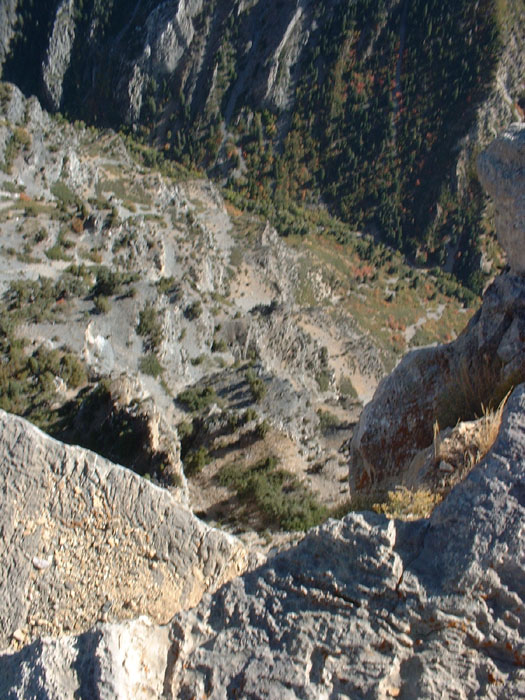 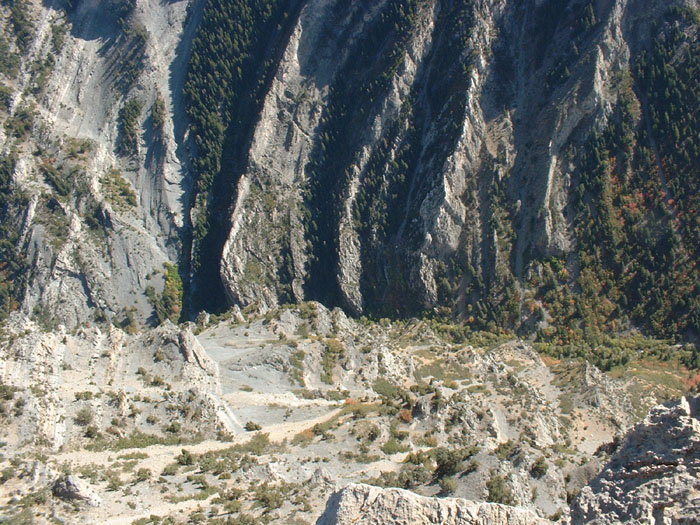 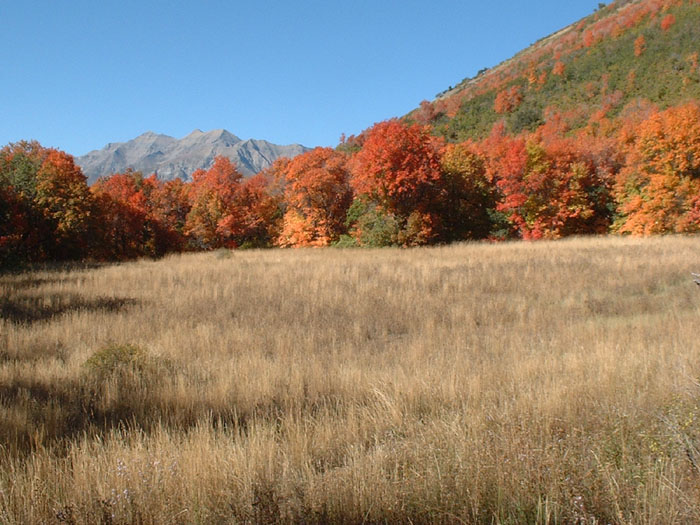 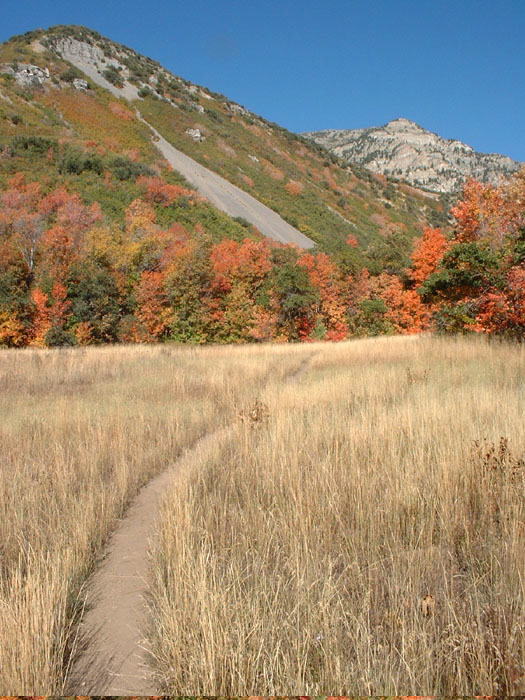 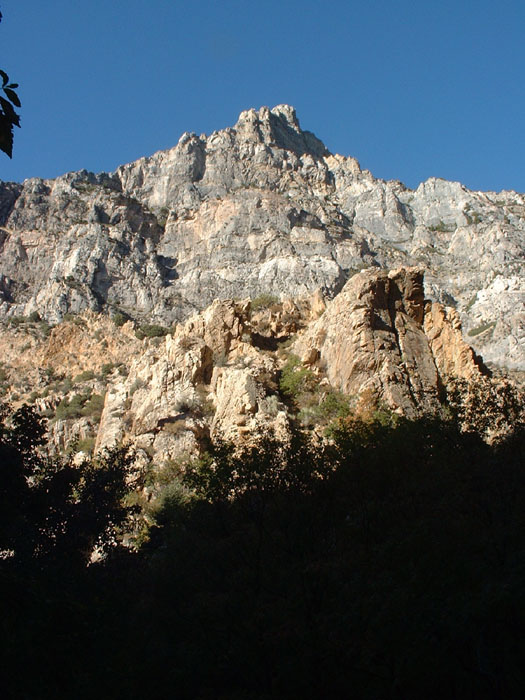 It was a good day today to climb a mountain. Beautiful weather, not too hot or cold, not a cloud in the sky. Halfway up the mountain when I realized that it was a Saturday and that we had great weather I wondered why I wasn’t climbing one of the peaks on my list. Squaw Peak is probably one of the lowest peaks to climb in the area, but aside from a very well groomed trail all the way to the top it was a similar climb to many of the other peaks I climbed this summer. Some of those peaks even had their starting elevation around the summit elevation of Squaw Peak. The typical ascent on those peaks was between 3-4000 ft.

I was probably 12 when I first remarked Squaw Peak’s southern exposure with the jagged cliffs running all the way from the canyon floor to the summit, and the cliffs pretty much ran the length of the canyon at it’s base (Rock Canyon). I had just gotten into rappelling and I thought it would be cool to be able to rappel from the summit down to the canyon floor. I wonder if anybody’s ever attempted that. Looking at the range from the West it looks like Squaw Peak, and Y Peak (The peak just to the South of Squaw) were once the same, and the mountain just cracked open forming the two peaks, and Rock Canyon.

I almost summitted Squaw Peak w/ my bike 2+ years ago. I was riding along the Bonneville Shoreline Trail, and as it typically does, it disappeared. So going in the direction the trail was headed I hopped a fence and rode a trail that was kind of faint, but still there; hoping eventually to rejoin the real trail somewhere down the line. The trail ended at another fence, but I saw a trail going up on the mountain. I thought I’d ride that for a while and then turn around. I got halfway up the mountain and decided that I’d already come that far I might as well keep going to the top. It took a couple hours, and I think I was finding my way up the upper half on game trails, but eventually I reached the ridge that leads to the summit. My roommate had told me at one time that there was a trail that led to Squaw Peak (he was talking about the one I hiked today) and I decided that I would try to find it. If I would’ve hiked for 10 minutes in a southerly direction up the ridgeline I would’ve hit it, but I went East, straight down the other side. The trees and grasses looked lighter and I thought I would intersect the trail eventually. There was no trail in the area I was in. The grass was now up to my shoulders and I had to carry my bike above my head, I ran out of water on the ridgeline, and it had been 8 hours since I’d last eaten, not to mention the denseness of the trees making travel time really slow. I would’ve turned around, climbed back up to the ridgeline and packed myself out the same way I came in, but I needed water, so I kept going another half mile until I hit what I was hoping to be a nice sized stream I could get water from. It was bone dry. It made travel easier for the most part though. When the streambed was blocked with fallen trees it was a pain. I thought I was going to have to go all the way up to Provo Canyon, but thankfully there was a canyon I ran into — I think it’s called Crack Canyon, not sure — it had a little trickle of water flowing down the top portion of it. It was teaming with all sorts of insects swimming around in it, and who knows what kind of other nasties were in it — the Camelbak slogan comes to mind to describe the situation: “hydrate or die”. If I would’ve known the area better I would’ve known that there was a beautiful dirt road and a campground about 500 ft to the east of where I filled up w/ the nasty water. It took a couple hours of rock hopping (on foot, not on my bike) to get to the mouth of the canyon, but the canyon was a welcome change to the dense forest I had just trudged through. Still carrying the bike was still a pain. I had wanted to leave it somewhere on the mountain to come back for it when I was in a better condition to carry it out — and after I had found a better route for getting into this area — but I never wanted to go back there, ever, ever again. I made it out of the canyon and finally I could ride again. Made it to the car about 8 hours after I left it. In all it was probably about 5 miles, but the route was less than optimal. It was really disappointing to see just how close I was to the trail I was seeking two years ago. Biking down that trail and coming out of Rock Canyon would’ve been the greatest thing, and would’ve made the entire trip only 3 hours long instead of 8. Well, whatever doesn’t kill you usually makes you stronger — and wiser. A GPS would’ve been awesome for that trip, no, I take that back, it would’ve been priceless.

I’m glad I went up there today. I’ve been bogged down with work from several different clients this past month, and this was a welcome break from the routine.

I got a beta this week. I call him Monsieur Poisson (Mr. Fish). I was thinking it’s kind of sad how he has to live his life in a tiny little bowl just swimming around in circles all day long. He’ll never be able to puddle jump in southern asia where he comes from, and fight off invading male betas, or enjoy any of his other natural activities. I realized a second after I had that thought that his life isn’t that much different from mine. I really spend most of my days in my room; either working or sleeping. If we were to compare our living space relative to our mass I think Monsieur Poisson gets more living space. On top of that he has a deluxe beta tank w/ his own cool blue led light in a stylish little stand which is quite the upgrade from a puddle back home. And human kind today lives better than the noblest kings of the past with all of our conveniences and technology. Since we’re pretty much in the same boat I can only reason that if I enjoy my living quarters and lifestyle, then so does Monsieur Poisson.