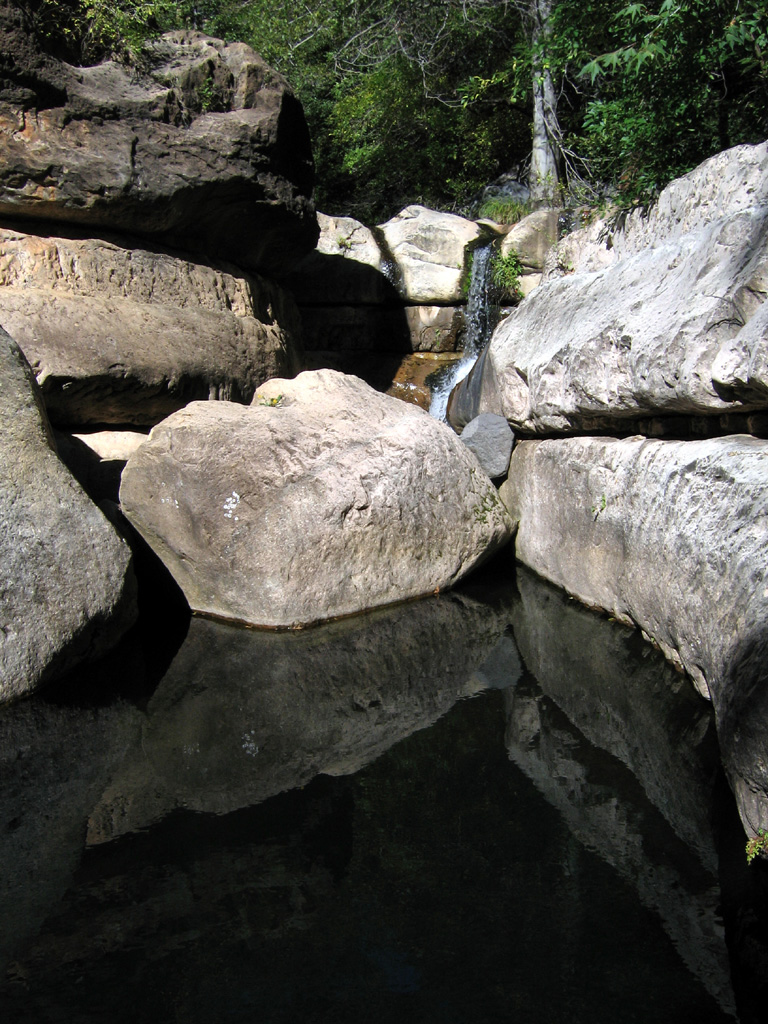 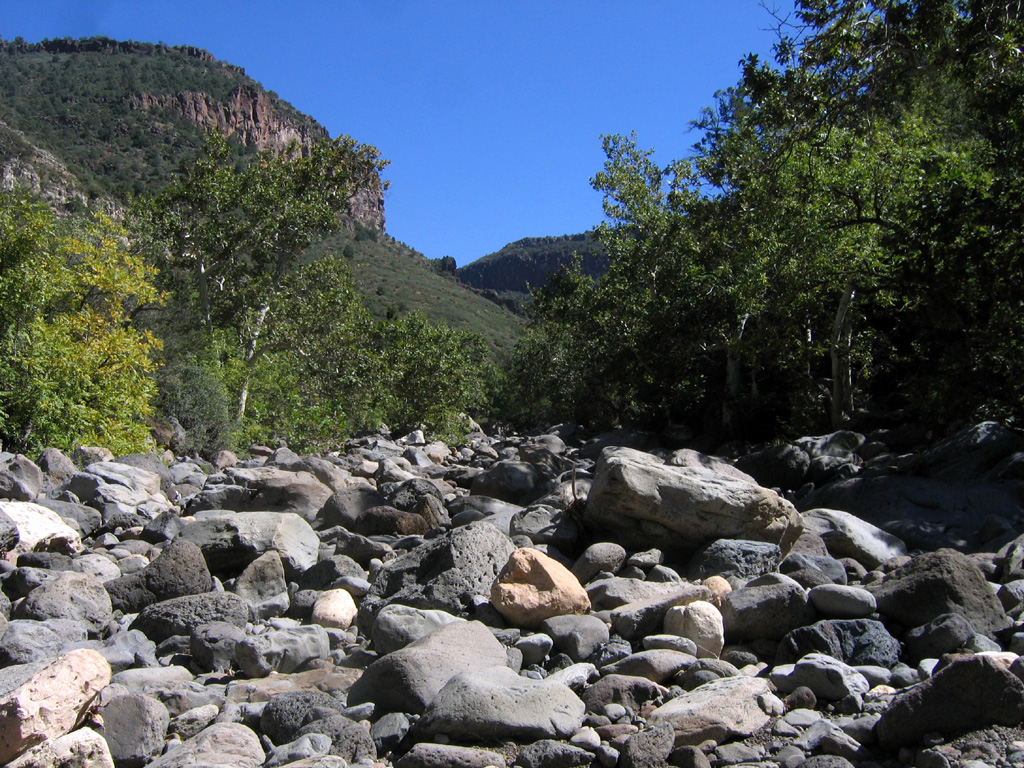 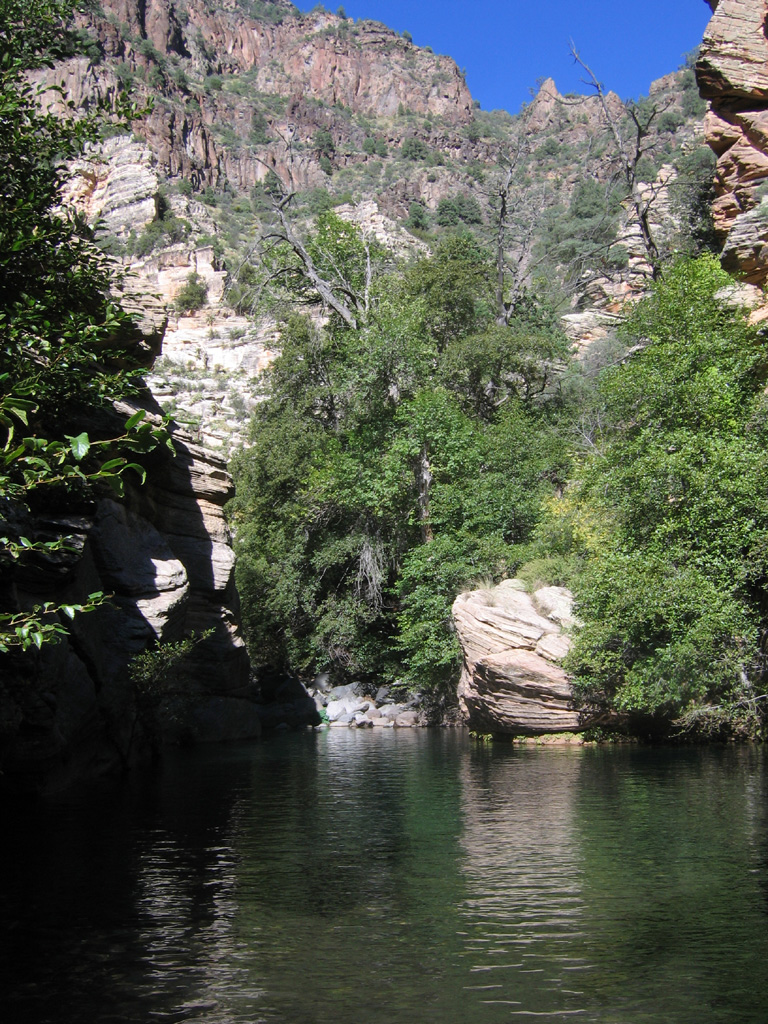 Sure it sounds like a strip club in Tijuana, but it was a lot funner. Well, I’m guessing it’s a lot more fun. In comparing Tijuana to the Creek – both were pretty hellish. The Creek was more on the fun side of hellish things. Having never been to a strip club, I really wouldn’t know how that compares though. I wonder what the google searches hitting this post will be like. No, I really don’t want to know. The creek was seriously fun though once I accepted a few things.

It started out with a drive from Ogden to the Sedona area. A serious dust storm closed down I-15 on the way, forcing a long detour through some tiny towns. That added some time to the trip, then getting stuck in a drive-thru line at Wendy’s in Beaver for 25 minutes was even better! In total, it was over 11 hours. I spent the night in Flagstaff at a crummy hotel between I-40 and a very active railroad line which required the train to toot its horn at every intersection.

Completely exhausted, I started the backpacking trip. I had little planning for this trip, and didn’t know the first 12 miles or so would be dry except for some big disgusting ponds that I don’t think would be safe to drink no matter how much it was purified. So I had 1 gallon for the first day and a half. Crossing the open desert was long and boring. Nothing to talk about.

Day 2 we dropped down into a canyon that would connect us with Wet Beaver Creek. It was pretty cool. We had some down climbs, and scrambles down the sides of dryfalls between 10-30 ft drops. It was really sweet.

Middle of day 2 we hit Wet Beaver Creek – except it was completely dry, which was expected. A spring fuels the waters flow further downstream, filling all the deep cold pools we would be swimming over the next two days. I dreaded getting into the first pool, wondering if my pack would float with my water reservoirs inflated with air, and my dry bag inflated as much as possible, and float it did! Since the water was fresh from a spring, it was very cold. I tried holding the pack out in front of me, pushing off a large rock and kicking, but after the initial inertia wore off, I went nowhere, then the wind blew me back to the start of the swim. I started swimming with one hand going too, and started moving. The next pool was definitely warmer, but that’s only because being wet in the wind was much colder than being cold in the water. The next few miles were mainly boulder hopping down the creek. Looking at the GPS, we had barely covered any of the creek section. Our campsite was pretty sweet though – one of the best in the canyon with wide open spaces, plenty of sand to camp on, protection from flooding, and trees to tie lines between to hang stuff to dry. My tent was outside of a dry sack so I had to dry it off – I basically set it up hanging from the line – pretty funny looking. My camera had gotten wet enough that it wouldn’t work, so I don’t have any pictures.

Day 3 was supposed to be our final day, but as the day wore on, it became clear that wasn’t going to happen. With the inevitability of swimming pools, the wind, lowering temperatures as the sun dropped behind the canyon walls, and complex terrain to navigate in the dark, it just didn’t seem like a good idea. Back to the morning though, it was endless boulder hopping. It just never ended. Just boulder after boulder. Sometimes there were no boulders to hop though, so it was into the trees to thrash our way through. Sometimes we had to hop boulders on the banks, and sometimes hop boulders while thrashing through the trees! Eventually though, the pools came back. Looking at the GPS we were only half way through the canyon, and we were 1/2 way through the final scheduled day. It just seemed like we were stuck in a horrible time warp. At one point I was convinced our exit was just around every corner, and was getting disappointed every time. Eventually when the sun was getting low I had crossed a pool, and I couldn’t take it any more. I was hungry, wet, cold, and didn’t want to face the canyon anymore. We had no chance of making it out that night – at least not safely, and the area had a fairly decent campsite. There were a few flat spots on slickrock. I had a slab just the right size for my tent, but had a drop off onto rock of about 2.5 feet on 3 sides. With the wind gusts, it made for a tense night at times.

Early on day 4, we headed out. The sun was barely lighting the cliffs above, not quite reaching the pools. The first pool we hit was right around the corner from camp, which was a huge disappointment. I wanted to warm up a bit by boulder hopping first, but got thrown right into the swimming. There was no way around it, the water was cold. I didn’t wear a shirt cause I would’ve just been colder for longer with it on since it would take much, much longer to dry than bare skin. The wind was seriously gusting as I got out of the first pool. I froze. The second pool was right after the first, and was still cold, but not that bad. Then the 3rd pool was right after that, and the water was starting to feel warm – physically warm. It was weird, cause I knew it was just as cold as the first, but it was definitely warmer than being in the wind. Earlier the previous day I got tired of taking off my pack to swim the pools, so I left it on, and started swimming on my back. It made it super easy to go from hopping to swimming and back. I can’t remember how many pools I swam after that. It just all started blending together. I just knew I couldn’t stop or I’d freeze. I still didn’t know when I’d hit the trail leading out of the canyon. The banks got easier to get through, and the pools no longer required swimming. Sometime later a canyon appeared on the South side of the Creek and I knew I was there.

I was so happy to find a trail that I started heading up a good climb for a 1/4 mile only to realize that I was going up the wrong side. So back to the creek and up the other side I was on my way out. The last 4 miles flew by, and I was glad to get back to my truck so I could call everyone who was already worried we didn’t check in the night before.

It was hard dealing with a never ending canyon, and some tough terrain that required a considerable amount of time to negotiate, and to just start enjoy the hopping, and the swimming of long pools of freezing water I have a huge range of feelings about this trip, but overall I think it was fun. I don’t know if I’d do it again, but I definitely want to do more of the same – as long as the pools are fairly clean, you know, no stinky funk.

Only 3 good photos before the camera stopped working, so I’m just showing them in this post.